GET NEWS AND ARTICLES IN YOUR INBOXPrint
A
A
Home | Wire | Myth: Half of Americans Don't Pay Federal Taxes

It's getting near tax time, again, and the conservative press is busy repeating Mitt Romney's favorite hobby-horse, namely, that nearly half of Americans don't pay enough in taxes.

This drive for driving up the nation's tax burden usually originates with the contention that "only" 55 percent of Americans pay income taxes, and then proceeds from that to the insistence that more people pay taxes. Just last week, Investor's Business Daily complained about the relative dearth of taxpayers, contending that "All of us need to share in the misery of filing and paying income taxes."

How things have changed. Once upon a time, the income tax was sold as a tax primarily for rich people, and — the people were told — ordinary folks would never pay more than 1 or 2 percent. The assumption was that any expansion of the income tax would be a betrayal.

That promise was abandoned almost immediately since, by the 1920s, the middle classes were already paying marginal rates of 10 percent or more, in many cases. (Although actual tax burdens were often far less than that.)

Now we're being told that the right thing to do is demand more people pay the income tax.

Uncle Sam sure won that battle of ideas.

The whole thing is premised on data put out by various tax reform organizations, including the Tax Policy Center, which calculates that in 2015, 45 percent of all tax units (i.e., individuals and couples) were liable for no federal income taxes.

This prompts statements like that found at IBD in which the author claims that "half of the country is paying the federal tax bill while the rest gets a free ride."

This statement, however, is obviously untrue since, if one cares to move one's eyes slightly down the page at the Tax Policy Center web site, one will find that 73.1 percent of all tax units (in 2015) do pay either federal income taxes or federal payroll taxes. In other words, plenty of people who don't pay the "income tax" pay taxes on income via the payroll tax. That income tax is assessed at a flat and regressive rate of more than 15 percent, once both worker and employer shares are included. (The employer share negatively impacts the employees' wages, of course.) In 2014, payroll taxes combined for a total of 34 percent of all federal revenues in 2014, or one trillion dollars. (Those who don't get a paycheck pay the aptly-named "self-employment tax" in its place.)

Moreover, as this article correctly point out, the Romneyite pro-tax position completely ignores the fact that many people who aren't paying income taxes right now, are likely to have paid those taxes in the past or at some point in the future. It also ignores the reality of federal excise taxes, state income taxes, and variety of other taxes that are often less avoidable than the federal income tax. Indeed, as the Brookings Institution found, "When looking more specifically at middle-aged workers with jobs, 96 percent paid federal income or payroll taxes" (emphasis in original).

The Burdens of the Payroll Tax

But for this article, let's concentrate on the payroll tax. The fact of the matter is, if you're a wage earner in this country, you're probably going to be paying taxes on income via the payroll tax (or self-employment tax). Nearly three-quarters of wage earners pay taxes on their incomes, although, thanks to the magic of Milton Friedman's tax withholding scheme, many people may have no idea how large their tax burden actually is.

What's more, the federal government is becoming increasingly reliant on payroll taxes to increase the government's revenue growth. In recent decades, the payroll tax's share has increased from under 10 percent in the 1940s, to a peak of 42 percent during 2009: 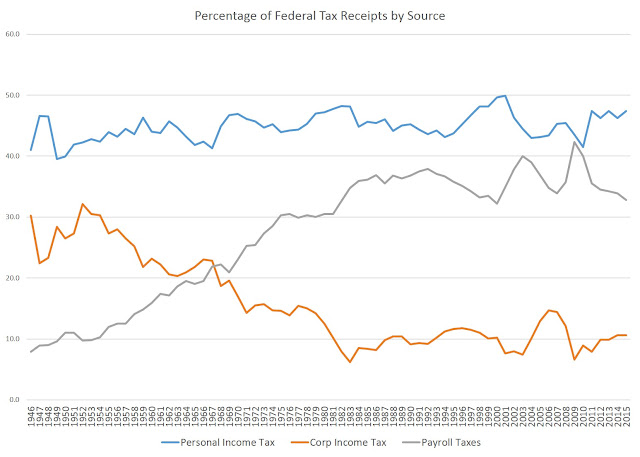 Source. Table 2.2.
It's significant, by the way, that the payroll tax's share peaked in 2009. That was a year in which incomes plummeted thanks to the financial crisis in the wake of the Federal Reserve's latest bubble-pop. But, the federal government can thanks goodness for the payroll tax which remained at its usual 15 percent even as many Americans took huge financial hits and saw their incomes — and thus their income tax bills — fall.

Since then, the payroll tax's share has fallen as the latest boom helps push up incomes, and pushed people into, higher tax brackets and inflation does its work to increase nominal incomes without increasing real incomes. Higher tax bills soon follow.

Calls for a Flatter Tax

Pundits and activists who think that more people should be paying taxes often end up calling for a flat tax, or at least a flatter one, although they don't always come right out and say that.

One major reason many people have no federal income tax liability is because they are able to take advantage of a variety of deductions and tax credits. These aren't just for rich people. People with children and mortgages and ordinary lives can often take advantage of them. Calls for a flatter tax are usually just calls for a higher tax bill for these people. (Although, even if they were just for rich people, that wouldn't be a reason to end them. The answer would be to expand deductions.)

Never acknowledged, however, is the fact that the payroll tax is a huge flat tax that already exists. It's not small. It's flat. It affects nearly every wage earner.

So, if some people are being kept up at night because too few people are paying the income tax proper, they should just be calling for an expansion in the payroll tax.

I don't advocate that, of course, but if "broadening the tax base" is something the Romneys of the world want, it's not necessary to make any immense change. They merely need to increase the payroll tax.

It's Just a Regular Tax on Income

Perhaps part of the reason there's so much confusion about the payroll tax's role as a flat income tax is the resilient but laughable fiction that payroll taxes are an "investment" that goes straight to some kind of Medicare and Social Security "trust fund."

There is no trust fund, of course, and payroll taxes are — if we're honest with ourselves — just regular ol' taxes on income that go straight to the general fund and are used on every federal program and project under the sun. We're supposed to pretend that they're a government version of a private retirement account, but in practice, they're nothing more than a tax that takes money form taxpayers so those monies can be spent on a variety of government programs.

So every dime a current worker pays in payroll taxes is immediately transferred to the federal government where it will go to some pensioner or banker or to federal employees or to line the pockets of members of Congress and their staffs.

If you received a legal paycheck lately, you paid this tax, just like 73 percent of Americans.