Inflation May Be Causing a Long-Term Rise in Unemployment

Economists Milton Friedman and Edmund Phelps argued against this naïve interpretation, which has since then established firm roots in public discourse. They explained the trade-off as a short-run phenomenon. When expansionary monetary policies lead to unexpected price inflation, employment can be stimulated if indeed wages increase slower than other prices in the economy. In this case the relative costs of labor diminish and more people are employed as a consequence. In the long run, however, there is no effect as inflation expectations adjust to actual inflation rates over time, and relative wages return to their equilibrium level.

Friedman and Phelps thereby adopted a view that had been dominant for a long time in economics, namely that unemployment is a phenomenon that ultimately depends on real economic factors like the institutional and political environment, especially on labor markets. Economist Ludwig von Mises shared this view, and thus appropriately called an increased and prolonged unemployment, institutional unemployment. However, Friedman and Phelps did not deny the possible short-run effect of monetary policy.

From this admittedly simplified representation of the short-run Phillips curve we can see a fundamental problem. If we think about the long run as a sequence of consecutive short runs, and if improvements are possible in the short run, then evidently we should also be capable of improving conditions in the long run. At least this should be possible if expansionary monetary policies are indeed neutral in the long run. But are they?

The Long-term Employment Consequences of Inflation

There is good reason to doubt it. Interestingly it was Friedman himself, who showed some discontent with his earlier work on price inflation and unemployment in his Nobel Memorial Lecture. He said that the research on the Phillips curve would have to go into a third phase in which a possible positive link between the two variables is explored. He also pointed out that one would have to incorporate the political process into the economic analysis. This research project has, however, not been tackled systematically.

The available empirical data also provide reason to think about a positive link between price inflation and long-run unemployment. The smoothed time series for Germany, France, the United Kingdom, as well as the United States all show the same pattern over the second half of the 20th century. First price inflation rates increased, then, with a considerable time lag, unemployment rates followed. 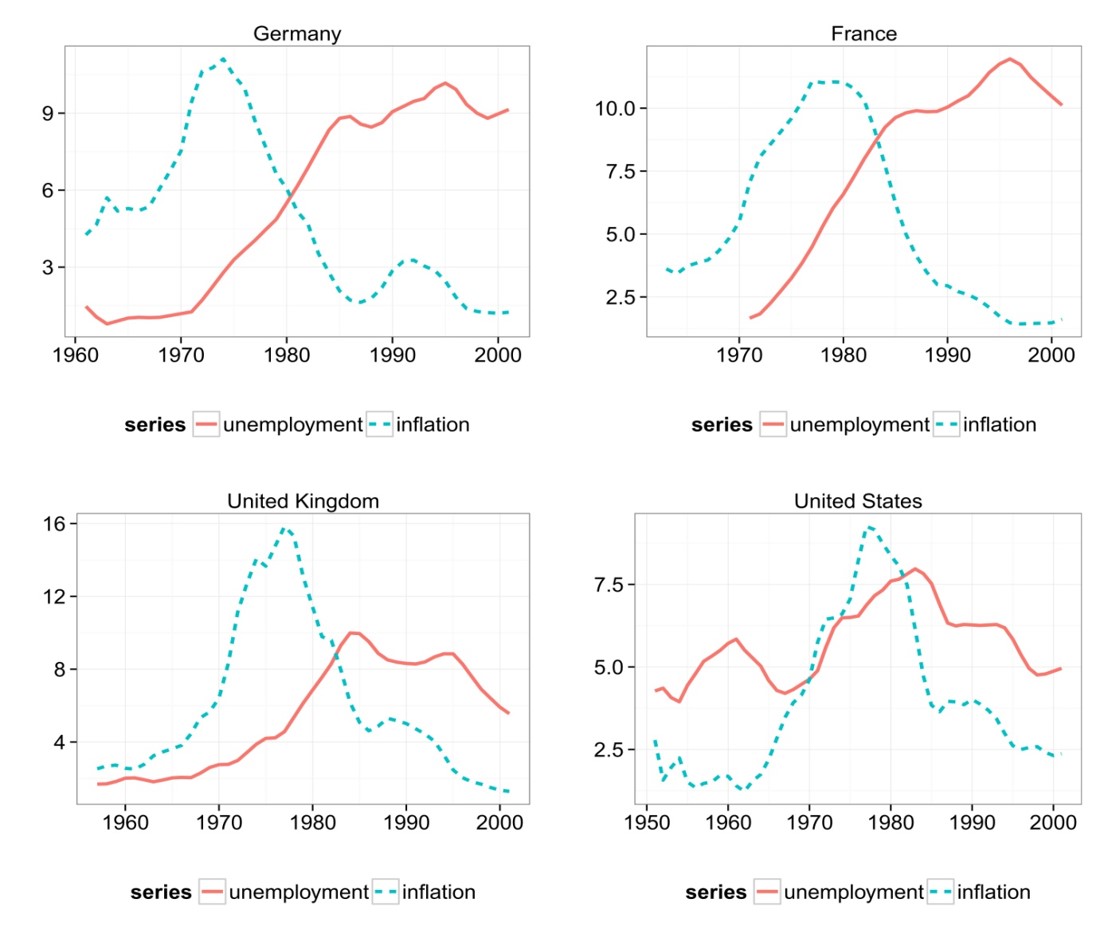 If we regard increased and prolonged unemployment as an institutional and political problem, but nonetheless suspect a link to price inflation, we have to ask what effects an ongoing expansion of the money supply may have on the political process itself.

In a recent study two unintended consequences of monetary expansion are examined with respect to their indirect effects on unemployment: (1) the redistribution of incomes and wealth, and (2) economic fluctuations.

Monetary expansion causes a redistribution of incomes and wealth. Yet, this redistribution occurs from bottom to top, which is why the gap between rich and poor is becoming wider. The newly created money in the modern financial system is not distributed evenly to all market participants, but it is given to certain market participants in the form of credit. Granting credit, however, is an inherently discriminatory enterprise. Credit is extended to market participants who are expected to have a low credit default risk — hence, to those who enjoy relatively high and stable streams of income, who are relatively wealthy and already possess assets that can be used as collateral, or who are relatively well connected, especially politically. People who are relatively well-off thus receive a disproportionately high share of the newly created money and get to spend it first on the markets for goods, assets, and investments. People who are rather bad-off receive a disproportionately small share of the newly created money and see prices for consumer goods and assets increase before their incomes catch up. Hence, the rich tend to benefit at the expense of the poor.

Expansionary monetary policies also cause other problems. They may trigger economic fluctuations. Initially a boom with rising prices and employment that which is compatible with the short-run Phillips curve is set in motion. Yet, this inflationary boom is unsustainable when nominal investment decisions are not in line with real economic savings as the Austrian theory of the business cycle explains. It will eventually turn into an economic recession, a bust, or a crisis. Over the past couple of decades we have regularly encountered economic crises. The loose monetary policy has certainly been one of the most important causal factors.

However, it is obvious that economic crises and a rising gap between rich and poor are seen as problems by politicians and the general public. Particularly in a political system that is driven by egalitarian ideals social injustice and economic mischief during crises have to be fought. The unintended consequences of monetary inflation thus undoubtedly set incentives for further political interventions into the economy. They are accelerants of politics, so to speak, and are conducive to the extension of welfare payments, tax increases, and more intrusive regulations into the market place.

Among other things interventions into the labor markets are induced. Minimum wage legislation and job protection laws are cases in point. These well-intended measures have of course multiple effects, but when it comes to the general level of employment they can only be harmful. Increasing the responsibilities and obligations of employers toward their employees lowers their incentives to hire people. On the other hand, increased welfare spending, especially unemployment benefits, may prevent people from actively seeking employment. These measures will thus increase unemployment.

Hence, adding the extra layer of politics to the economic analysis we can, following Ludwig von Mises’s theory of interventionist spirals, explain a positive link between price inflation and long-run unemployment as we have observed in the second half of the twentieth century.

It was the initial intervention of monetary expansion that caused price inflation, and the further interventions in response to the unintended consequences of the first that rendered labor markets less flexible and led to institutional unemployment. However, the connection that we have drawn between the two variables — price inflation and long-run unemployment, is neither direct nor necessary, but rather historically contingent. It is not an a priori postulate of theoretical economics. As Milton Friedman correctly suggested, it is dependent on political decisions. And it is up to politics to end it.

The Interesting Case of the Zaïre—the Question MMT Cannot Answer

The case of the zaïre currency in the Democratic Republic of the Congo provides strong anecdotal evidence discounting the fiat currency–obsessed modern monetary theory.