How Much Do Central Banks Cost Us? | Mises Wire
Skip to main content

GET NEWS AND ARTICLES IN YOUR INBOXPrint
A
A
Home | Wire | How Much Do Central Banks Cost Us?

How Much Do Central Banks Cost Us?

A classic argument for central bank controlled fiat money goes like this: a commodity such as gold is very costly to produce. All the resources, capital, and labor devoted to mining gold for monetary purposes could be employed elsewhere in the economy, to the benefit of society, if only we had a fiat standard.

This argument is by no means conclusive. We would not stop producing Champagne either, just because sparkling water is cheaper. However, there is an undeniable grain of truth in it. At firrst glance it seems we could save a lot of resources under a fiat standard. But do we really?

The euro provides a suitable case study to go after this question. How much does it actually cost to produce the euro and to conduct enlightened monetary policy along the way?

The European Central Bank (ECB) was founded in June 1998. By the end of 1999, it employed 732 fulltime staff, among which 55 held managerial positions. By the end of 2003, these numbers had increased to 1,213 and 84, respectively. All of these employees were hired on permanent contracts. This policy has changed in 2004. At the end of 2016, the ECB employed 3171 fulltime staff and total annual staff costs amounted to some €467 million. Staff costs have grown at an average annual rate of 12.7%. But that is hardly the end of the story.

Administrative costs have grown from €61 million in 1999 to €414 million in 2016 at an average annual rate of 12%. Another item of expenditure are costs for coin and note production services, which was added to the annual accounts in 2002, the year the euro was introduced in cash. That year it amounted to €118 million. Thereafter it dropped and remained always below €9 million per year.

Depreciation of fixed assets is the fourth item of expenditure contained in the ECB’s profit and loss account. It increased in 2015 from €15 million to €64 million, since the ECB moved into the new headquarters at the East end of Frankfurt, Germany. The new building is owned by the ECB and construction costs amounted to more than €1.3 billion.

Interestingly, the ECB has continued to rent office space in their previous domicile, the Eurotower in downtown Frankfurt, which today serves as headquarters to the Single Supervisory Mechanism founded in 2014. 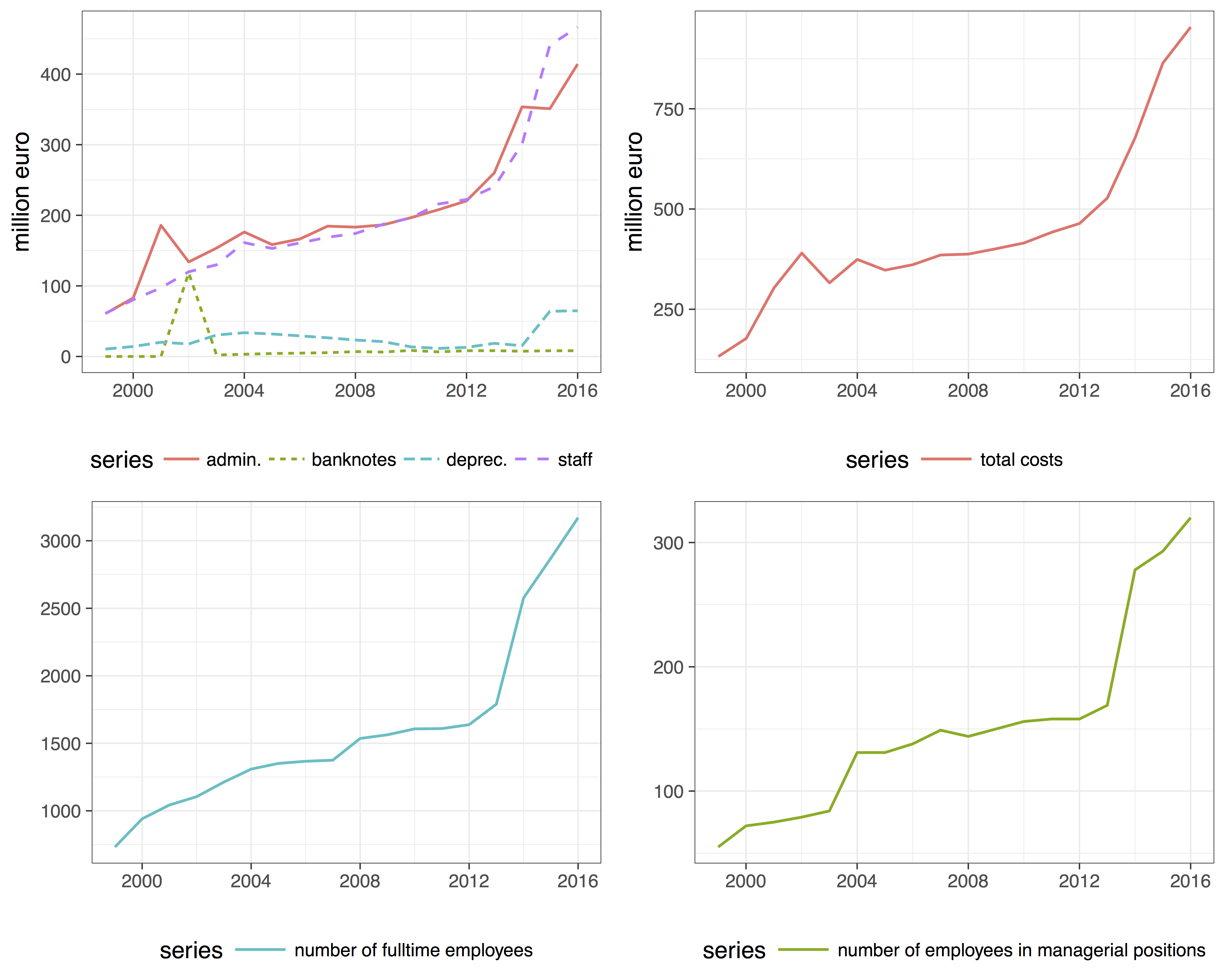 Is that all there is? Not quite. The euro system is not entirely managed by the ECB. Every member state has its own national central bank (NCB). The three big players are the Banque de France, the German Bundesbank and the Banca d’Italia. Each one of these NCBs has substantially higher operating expenses than the ECB. More importantly, their expenses have not really shrunk, since the ECB has overtaken some of the monetary policy tasks for the union.

Total costs of the NCB of Italy have indeed decreased between 1999 and 2016. This, however, is entirely due to some dubious item of expenditure, which we find in their annual accounts under the title “other costs”. This item has decreased from more than €1,300 million to less than €50 million. Administrative and staff costs on the other hand have continuously increased, together by more than €620 million.

Total costs of the Bundesbank show no trend. The Banque de France increased their annual operating expenses by more than €450 million since the foundation of the ECB. When we add the total costs of all four institutions, we observe a clear upward trend with a runaway value in the year the euro was introduced as a physical currency.

In 2016, total operating expenses of the ECB and the three NCBs of France, Germany and Italy amounted to almost €7 billion.

There are still 16 other NCBs in the euro area. The remaining member states are Spain, Portugal, Belgium, Luxembourg, the Netherlands, Ireland, Greece, Austria, Finland, Slovenia, Slovakia, Malta, Cyprus, Estonia, Latvia and Lithuania. This gives us a total of 20 central bank institutions, including the ECB, that operate within the currency union. In 2016, their combined annual operating expenses were more than €10.6 billion.

Is €10.6 billion a lot, or not? The readers may judge for themselves. But it seems as if we are not saving nearly as much as we theoretically could. Let us perform a back-of-the-envelope calculation to put the result into perspective.

The first thing to notice is that global gold production has actually continued to increase even after the transition to a fiat standard. Moreover, central banks are responsible for a large proportion of the demand for gold. The three biggest gold mining companies, Barrick Gold in Canada, Newmont Mining from the US and AngloGold Ashanti from South Africa covered more than 14% of the global gold production in 2016. This is more than the euro area’s fraction of world GDP (about 11.8%). These three giants produced 14.05 million ounces at an average all-in sustainable costs of slightly less than $860, that is, roughly €730, per ounce. Putting the numbers together, we obtain annual costs of close to €10.3 billion, which is less than the operating expenses calculated for the central bank system of the euro area.

However, it goes without saying that the costs and benefits of central banking under a fiat standard go beyond cold-hearted business accounting. For one thing, what would all the PhD economists do if modern central banks were abolished? They would be lost on a free market for labor.