GET NEWS AND ARTICLES IN YOUR INBOXPrint
A
A
Home | Wire | Guns: How The NY Times Manipulates Data

This is a common tactic among gun control advocates who make claims such as "the US has the highest homicide rate of any developed country." The qualifier "developed" is then manipulated to make the US seem like a freakish outlier. As I've explained here, this common tactic requires a lot of cherry picking of data and ignores the way that many American states — many of which have few gun control laws — have some of the world's lowest homicide rates.

Nevertheless, the Times is back at it. In an article titled "Compare These Gun Death Rates: the US Is in A Different World" the authors Kevin Quealy and Margot Sanger-Katz carefully construct a model using per capita GDP data and gun homicide data to make the US appear all by itself in the world. Here's the graph they've constructed: 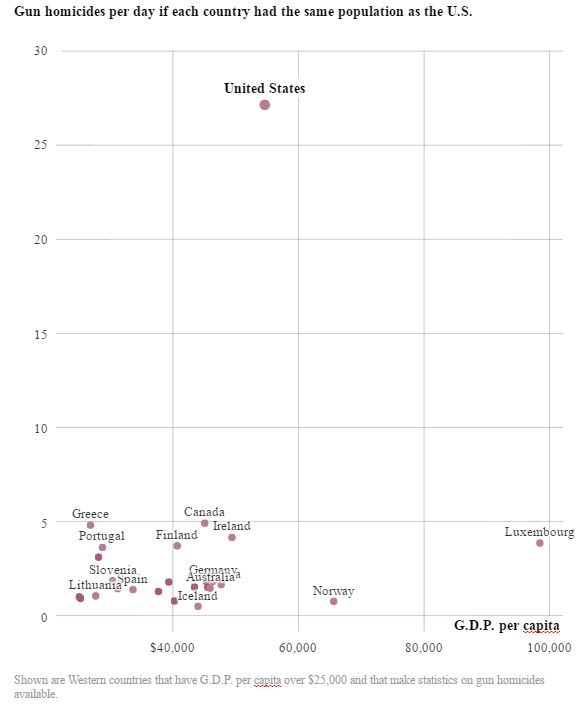 Note how extreme the US appears.

But, let's start asking ourselves about some of the decisions the authors have made and about their data.

First of all, I must note I was unable to recreate the author's data. They say they're using Small Arms Survey data, but don't link to the exact source. They only link to the general SAS web site. After multiple searches, I was unable to find the data for gun homicides (something very different from the widely available overall homicide data). The authors use World Bank GDP data, and I was able to find that data easily enough. On the gun homicide data, I decided to use data from the often-cited UNODC Global Study on Homicide (2013). This report includes data on the "mechanism" by which homicides committed, including firearms. Using UNODC homicide data by method, and calculating rates using World Bank population data, I was able to more or less recreate the NYT chart. (x axis = per cap GDP; y axis= gun homicides per 100,000): 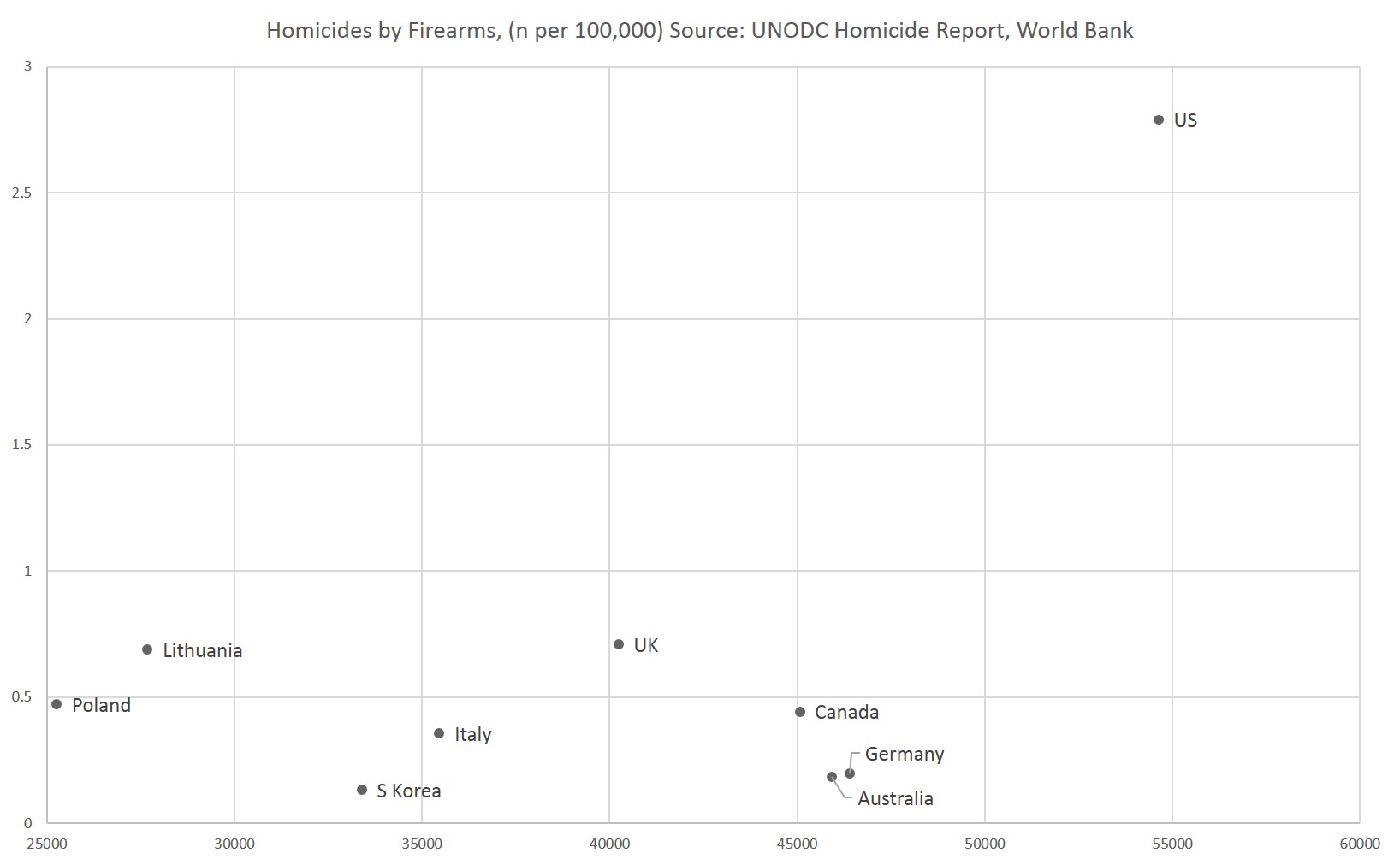 For my chart, though, I have used the commonly used metric of homicides in the "n per 100,000" format. For whatever reason, Quealy and Sanger-Katz have invented a new metric that makes comparisons with already-published data more difficult, so I have just stuck with the more-commonly-used metric.

Note that my graph communicates the same thing as the NYT chart, using the same range on the axes. I have only included a few European countries because Western Europe tends to be quite uniform in homicide rates. They're around 0.5 to 2 per 100,000. There's no need to include every single one. But in this graph, as in the NYT graph, the US is clearly "off the charts."

Narrowly Defining Who Gets Counted

But then we have to ask ourselves why the authors chose to make their cut-off at $25,000 GDP per capita. There are a number of countries classified as "high" on the Human Development Index by the UN that are below $25,000 in this regard. Why should those countries be excluded? In many cases, the excluded countries are also peaceful democracies. Quealy and Sanger-Kathz, though, have been very careful to very narrowly define the countries for comparisons. In addition to having GDP per capita above $25,000, all countries included must also be "rich Western" countries (whatever that means). 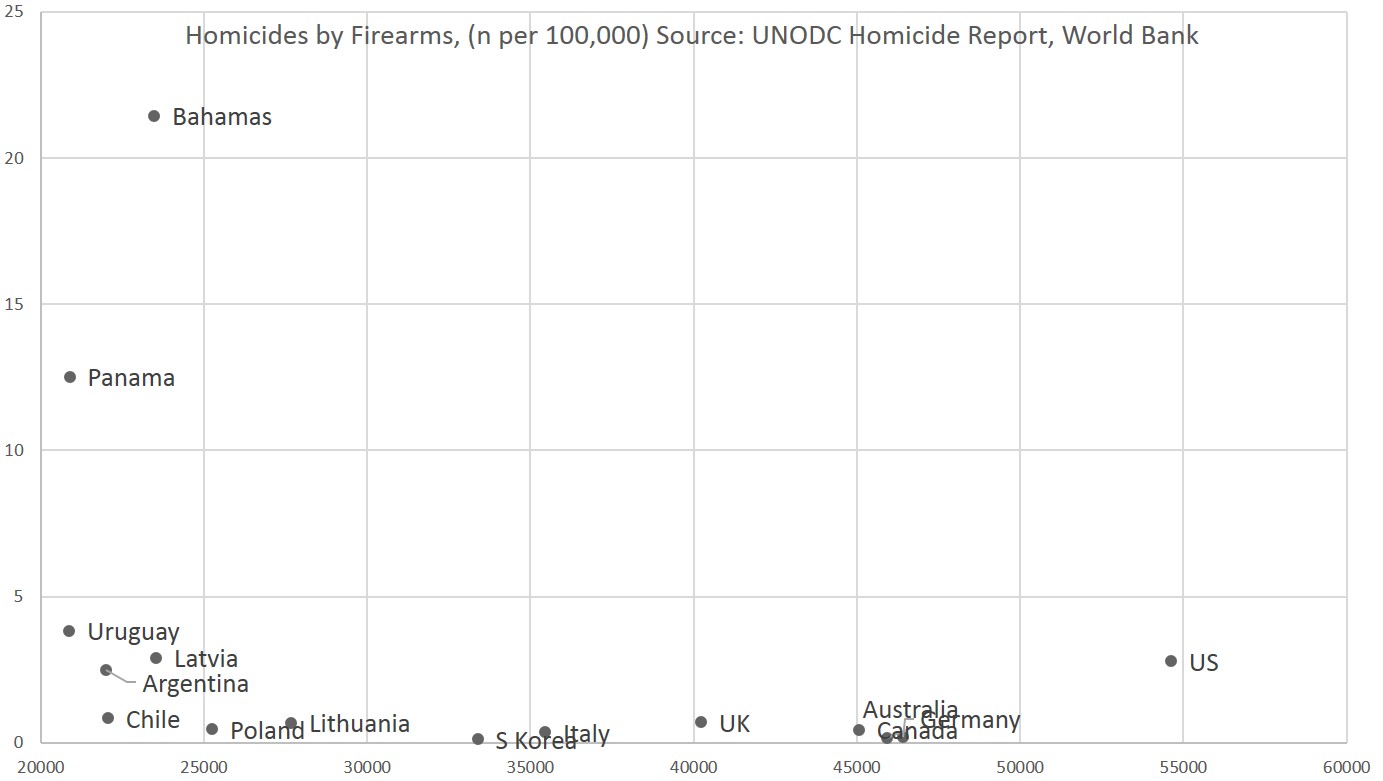 Suddenly, the US isn't quite so "off the charts." Indeed, in this case, the US is rather comparable to several countries. But are the countries "rich and Western?" Well, in this case, the Bahamas, Panama, Argentina and Uruguay are all stable democracies with a "high" Human Development Index value. All are inhabited mostly by people who speak Western languages, practice Western religions (Roman Catholicism and Protestantism) and employ Western-style legal systems. But, for whatever reason, they don't make the cut. Latvia, with a comparable homicide rate to the US, is a NATO country where the largest religion is a variant of Christianity. Like all other countries shown here, Latvia is a stable democracy.

So, it's unclear why the definition list of countries chosen by Quealy and Sanger-Katz should be regarded as definitive or particularly useful. In fact, in an often-cited report on gun homicides called "Firearms-related deaths in the US and 35 other high- and upper-middle-income countries" the authors, writing in the International Journal of Epidemiology, saw fit to include Brazil, Mexico, and Argentina in their analysis.

Additionally, anyone who is familiar with global homicide rates will probably be wondering where Russia is on this chart. Russia, after all, is an industrialized nation with a space program, a member of G20, and a top-50 country on the UN's Human Development Index.

Russia, a country of 140 million people, is conveniently excluded from these comparisons for a couple of reasons. For one, with a GDP per capita of slightly under $23,000 it is excluded from the NYT chart for not making the $25,000 cutoff. Moreover, perhaps it is not "Western" enough according to Quealy and Sanger-Katz. And most conveniently of all, Russia does not report homicide data based on method. So Russia isn't included in this metric in the UNODC data, at all.

Thus, if we really want a better picture of homicide in the world, we'll have to look at homicides overall. Besides, the use of "gun homicides" instead of homicides has long been a trick employed by gun control advocates to further try to make the United States look like an outlier.

Naturally, in countries with lots of legal firearms ownership, there will be more homicides involving firearms. But, this does not necessarily mean that there will be more homicide overall. For example, in Switzerland, 48 percent of homicides are committed with firearms. In neighboring Germany and Austria, the use of firearms in homicides is much lower (24 percent and 10 percent, respectively.) However, the homicide rate is slightly lower in Switzerland (0.6 per 100,000) than in Germany and Austria (0.9 and 0.8 per 100,000, respectively).

Moreover, general homicide statistics are more available for more of the world, have a much better and longer history of data, and better describe the true role of lethal violence in a society. As Eugene Volokh points out here in some detail, it matters little to a homicide victim whether he was killed with a gun or a knife; gun control laws can simply cause murderers to switch to other means without actually lowing homicide rates; firearms can also be used to prevent homicides.

If one seeks to honestly measure homicide rates, one needs to use the actual overall homicide rates, which is more widely employed globally, has been collected longer, and is more generally reliable.

Let's look at our second graph again. But instead of using gun homicides, let's look at homicides overall (the x axis = World Bank GDP per cap; the y axis = homicides per 100,000): 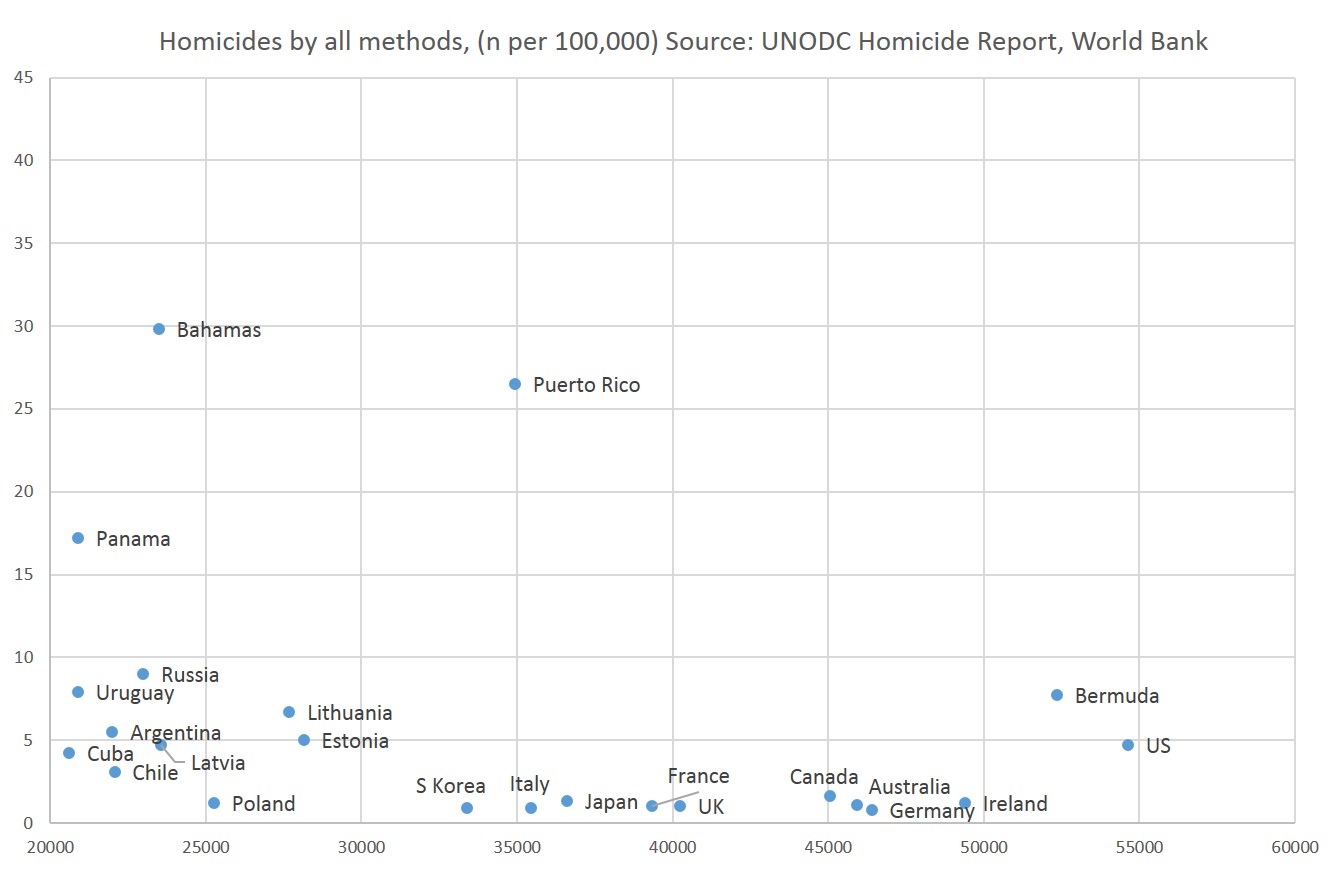 Also, as I have noted before, if we make comparisons at the local level, we find that many American states do not appear to be particularly remarkable, except perhaps for how low their homicide rates are in a global context (x axis = GDP per cap; y axis = homicides per 100,000): 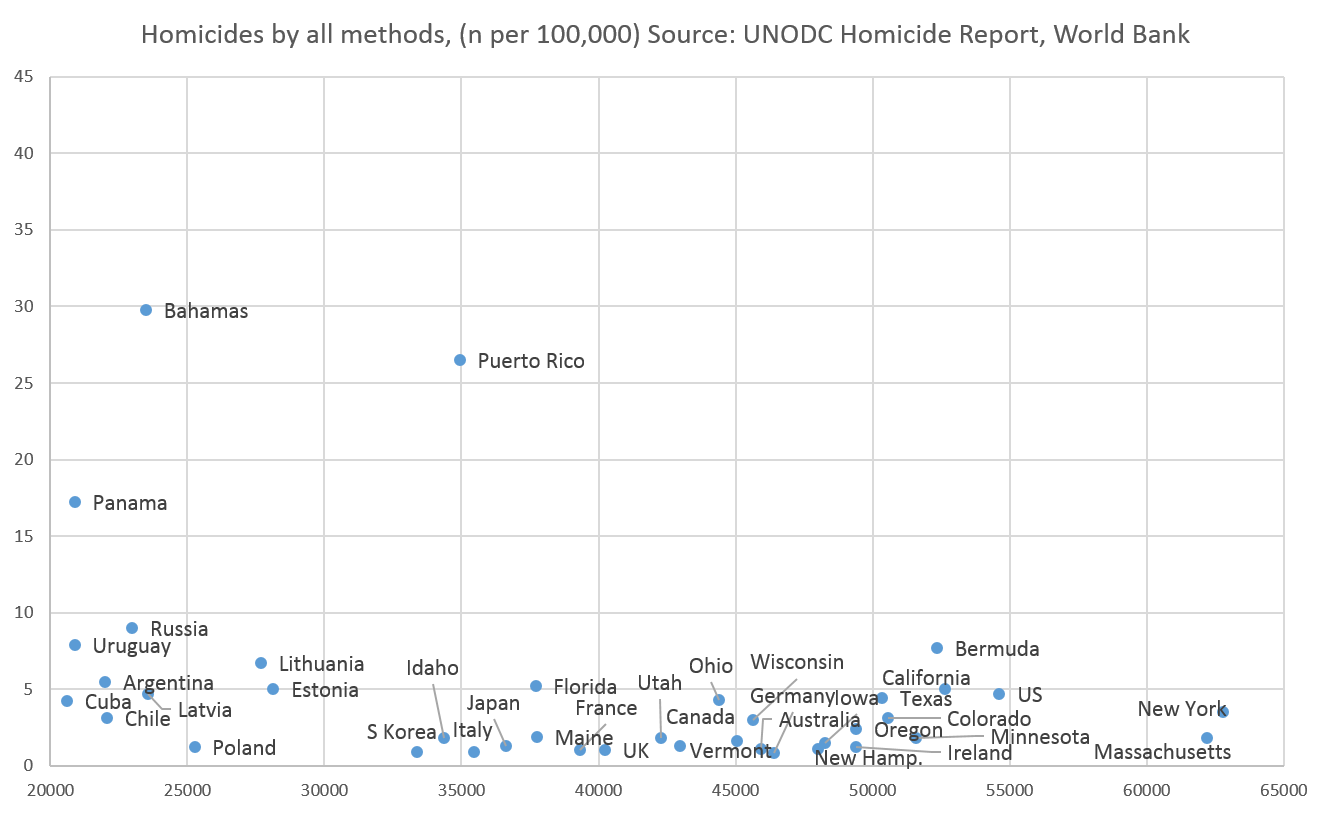 Through the entire exercise by Quealy and Sanger-Katz, the subtext is that countries with more gun control (i.e., European countries) have lower homicide rates. Not only is this not even true if we include the Baltic states and Russia (all European countries), but it's not true if we include countries with stringent gun control in the Americas. This holds up in stable democracies like Argentina and Uruguay, and also in the US territory of Puerto Rico where gun control is far stronger than on the American mainland.

Gun control advocates have long struggled with how exactly they should define away high-gun-control countries with homicide rates comparable to — or larger than — the US. (i.e., Brazil, Russia, Mexico, the Baltics). In the past, some have employed membership in the OECD as a criterion which has long been regarded as a list of "advanced" countries. However, since the 1990s, the OECD has expanded to include Mexico and Estonia, and has pursued membership talks with Latvia, Lithuania, Russia, Brazil, and Colombia). Clearly, membership in the G20 is also out since that would include Argentina, Brazil, Mexico, and Russia.

Clearly, the definition of the "civilized world" as imagined by gun-control advocates must be limited even more in order to make the United States seem "special." With this latest effort from the New York Times, Quealy and Sanger-Katz have attempted to do just that, although they employ arbitrary cut-offs, focus on the wrong metric of "gun homicides" and conveniently ignore major, industrialized countries like Russia.