"Gridlock" in DC Does Little to Stymie Government Spending

This theory assumes that in such a case, the two parties will spend all their time fighting each other and neither will be able to pass much damaging legislation.

John Adams employed this theory, more or less, in his view of constitutional government. In his important and influential book Defence of the Constitutions of the United States, Adams imagined that the House, the Senate, and the Presidency would naturally represent three mutually exclusive and conflicting constituencies that would prevent each other from gaining too much political power.

Nowadays, though, this view of government appears to be rather naive. It is simply not true that members of Congress are necessarily in conflict with presidents, and it is certainly not true — as Adams thought — that members of the House have social and economic interests markedly difference from members of the Senate. In other words, it's not at all clear that all branches of the federal government are not perfectly capable of working together to serve their own interests at the expense of groups who are not influential in Washington.

Indeed, members of the Washington elite tend to intermarry, attend the same schools, and enjoy memberships in the same social and political institutions, regardless of whether or not they are in the White House or in the House of Representatives. Similarly, it is not a given that just because different political parties control different institutions in Washington, that they will "cancel each other out," so to speak. 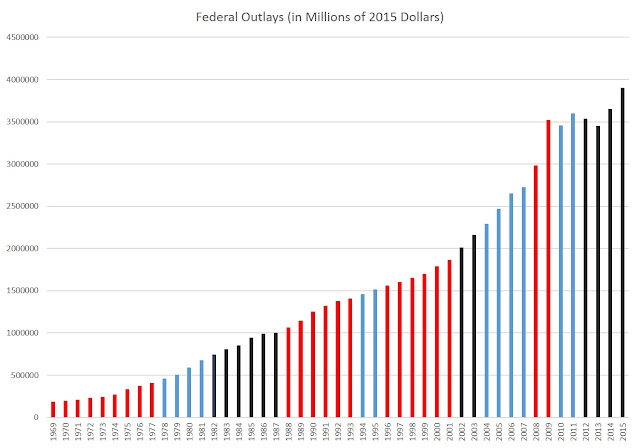 (I'm assigning budget years to Congresses based on the year that begins after each congress is sworn in. As explained here).

There's no clear trend here for when there's either total or partial gridlock. In fact, the budget years of 2014 and 2015, in which Obama faced a House with a heavy GOP majority have seen immense growth in government spending. Moreover, George W. Bush and the Democratic Congress apparently had no trouble agreeing on massive amounts of government spending in 2008 and 2009.

Let's look at it another way.  If we take the growth rates for all the years of each type of gridlock (or lack thereof) and average them out, we get this: 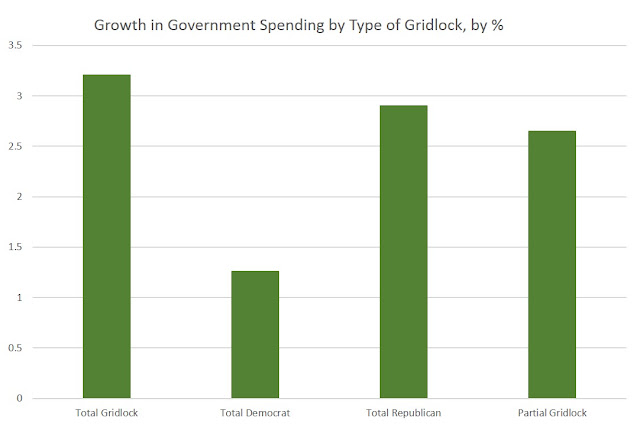 Viewed another way, let's look at each period: 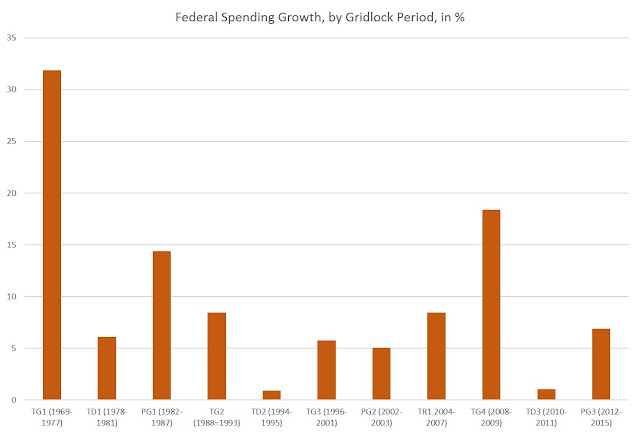 There's not much here either to suggest that gridlock does much to keep down federal spending. In fact, the two most sedate periods of federal spending growth occurred during periods in which Democrats totally controlled Congress and the White House. The partial gridlock period under Reagan saw significant growth, as has the most recent four budget years.

Thus, it's hard to see how gridlock is much of a saving grace, and the gridlock theory may be based more on wishful thinking than historical experience.

In fact, it's just as plausible to assume that both parties share enough in terms of common interest groups and an overall ideological outlook as to facilitate bipartisan efforts at ensuring major national interest groups remain well-favored regardless of party divisions. In other words, experience suggests that John Adams was wrong.

Moreover, any time we do see a sizable amount of support for someone who might function outside the expected bi-partisan zeitgeist (e.g., Ron Paul or Donald Trump, and to a lesser degree, Bernie Sanders) party elites work feverishly to eliminate the threat.