The number of police officers killed on duty dropped to near a 50-year low in 2017. As of December 28, 2017, 128 officers died in the line of duty. That's down 10% from 2016, when 143 officers died, according to new data from National Law Enforcement Officers Memorial Fund.

The only other year with fewer deaths in the past five decades was 2013, when 116 officers were killed.

These deaths should not all be interpreted as the result of attacks from members of the public. Traffic accidents are the leading cause of police-officer deaths, although shootings play a significant role.

Although we continue to hear complaints about a "war on cops" from police labor unions, government institutions, and their allies, there is no evidence to support the claim.

As Tate Fegley noted in October, the most recent data continues a decades-long trend:

Since we are dealing with such small numbers, of course, it is impossible to claim that this year's drop to the second-lowest in 50 years represents any sort of new trend. It would only take an additional 10 shooting deaths to significantly change the trend.

But to what should we attribute this trend?

According to USA Today, it is at least partly attributable to "officer safety":

"In my 33 years doing this, I've never seen the amount of awareness given to officer safety and wellness," [Craig Floyd, president and chief executive of the National Law Enforcement Officers Memorial Fund] said. "That's definitely been paying off and will continue to help make law enforcement a significantly safer profession."

Meanwhile, "The number of people killed by officers increased slightly from 963 in 2016 to 971 this year, according to data compiled by The Washington Post." In other words, in recent years, more than seven times as many people are killed by police, than police die on duty from all causes, including accidents.

"Officer safety," of course, is not exactly a non-controversial term. Often, in the wake of police shootings of unarmed citizens, we hear that training related to "officer safety" is geared toward a more aggressive stance.

Police training starts in the academy, where the concept of officer safety is so heavily emphasized that it takes on almost religious significance. Rookie officers are taught what is widely known as the “first rule of law enforcement”: An officer’s overriding goal every day is to go home at the end of their shift. But cops live in a hostile world. They learn that every encounter, every individual is a potential threat. They always have to be on their guard because, as cops often say, “complacency kills.” ... So officers are trained to shoot before a threat is fully realized, to not wait until the last minute because the last minute may be too late.

Training like this nowadays is peculiar to the public sector because it is enabled by "sovereign immunity" laws that make it more difficult for private citizens to sue government agents and agencies for damages. Federal Courts have also made it clear that police agencies are not required to protect citizens from threats. "Law enforcement" and not "citizen safety" is the purpose of government police agencies. If police agencies themselves are already shielded from legal sanction for any lack of action, why accept a high level of risk?

It should also be noted that policing is not among the deadliest professions, and is not in the top ten according to the Bureau of Labor Statistics: 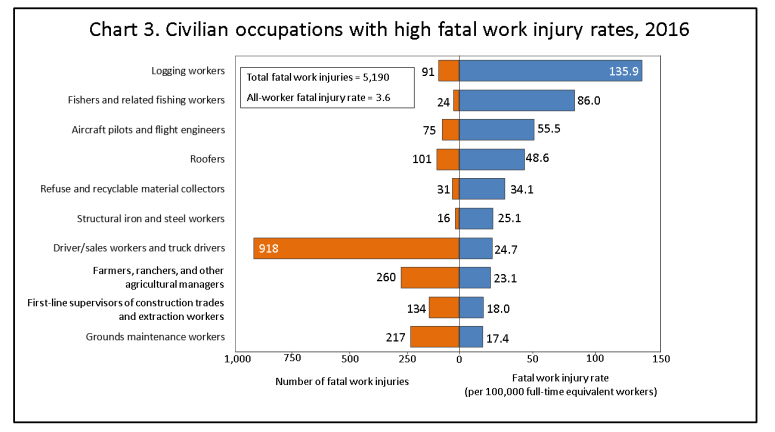 Given that there are more than 900,000 sworn officers, and with 128 fatalities (including accidents) reported in 2017, that brings the fatality rate to under 15 per 100,000. In other words, a job in "grounds maintenance" is more risky than being a police officer.

The BLS estimates that there are 1.1  million security guards in the United States, and they too face a variety of hazards:

Private Officer International (POI) has started keeping track of private security officer deaths on duty, concentrating mostly on so-called “feloniously killed” officers. That means they’ve been shot, stabbed, run over, run down, beaten to death, pushed off buildings and so on. According to POI, 112 private security officers were killed last year [2012], whereas (according to the FBI’s own statistics), 72 police officers suffered the same fate in the same period.

If we use these numbers to calculate fatalities based on "feloneously killed" officers, we find this fatality rate among private security officers to be 10.1 per 100,000 while the rate is 8 per 100,000 for government police. Unfortunately, definitions and numbers of private security officers and fatalities vary by source and it is difficult to find well-established data.

But what is gained by putting both police and private security in these risky situations? Given the police agencies do not face any direct competition in the United States, it is difficult to draw any conclusions as to the "efficiency" of policing. Looking at areas where both private security and government policing have intersected, however, we can draw some conclusions.

Private security is rarely studied by researches, but some data (including this suburban case) suggests that private security is, at the very least, not harmful, and can effectively reduce property crime. One larger study (this RAND study of Los Angeles) suggested that when businesses hired private security firms for "Business Improvement Districts" (BIDs) in the city, violent crime dropped more in BID areas than in non-BID areas. RAND also concluded that this was not a matter of simply pushing out crime into surrounding areas.

But what is the correct balance between agent safety and confronting criminal behavior? Interactions between police, security officers, and citizens always have the potential for violence. One way to reduce risk to police and security workers is to simple reduce these interactions. But that makes it difficult to investigate and head off criminal behavior. So, it would seem to be prudent to focus police and security agent actions toward the prevention and solving of real, violent crime (or property crime).

Private security, of course, tends to focus on these sorts of real crimes, precisely because they're the ones that are most costly to those who are paying for the private security.

Unfortunately, government police, on the other hand, end up serving the needs of elected officials rather than property owners, and government policing often involves enforcement of laws against "crimes" that have nothing to do with property crime or violent crime:

That means 82 percent of arrests were made for something other than violent crime or property crime.

Moreover, many of these non-violent offenses — such as drug use, liquor violations, carrying an illegal knife, or other infractions that should be regarded as small-time offenses can result in serious jail time or prison time, as well as steep fines and lost earnings.

For instance, the highly publicized death of Eric Garner at the hands of police officers was a conflict precipitated by the sale of untaxed cigarettes by Garner. The police officers who killed Freddie Gray in custody in Baltimore later claimed the arrest was necessary because Gray possessed a knife that violated city ordinances.

These situations are of course hazardous for the private citizens caught up in them. But they are also dangerous for the police involved as well. Is this really a prudent way to spend taxpayer resources while exposing police to risks?

If police really wanted to enhance officer safety, they'd push for an end to the War on Drugs, which turns every minor traffic stop into a potentially deadly situation. When police become engaged more in searching private citizens and seizing private property — rather than in recovering stolen property or tracking down violent criminals — then each police interaction becomes a fearful experience for a population of people far beyond the population of violent criminals. small-time drug addicts then fear arrest an imprisonment for any of the countless non-violent "crimes" that can bring stiff fines and jail terms. Officer safety could be enhanced by pursuing laws and policies that create a more clear connection between police work and suppressing real violent crime. This would create a more helpful, less fearful public, and a police force more focused on real crime. Given how the War on Drugs is extremely lucrative for government police agencies, however, this is unlikely to happen.