The course of economic development in England 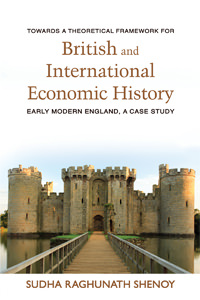 Sudha Shenoy (1943-2008) was a legendary figure in the history of the Austrian School. Her father, B.R. Shenoy, was practically the only libertarian in India in his day. His daughter, Sudha, was a student of Hayek and Rothbard and went on to teach in Australia, with a specialization in development economics. She inspired many students with her teaching and her eloquent defense of economic liberty.

This mighty treatise, her dissertation now in book format, is probably the first full Austrian treatment of development economics, with a model carved out of the writings of Menger, Mises, and Hayek. She traces an economy’s progress from consumption, to distribution, to production, and demonstrates the essential preconditions that must be met for an economy to move through this trajectory.

In many ways, this book earns for Sudha Shenoy a high place in the history of the Austrian School. Even though it is only now being published after her death, it is a book for which she will be long remembered.

“Professor Shenoy was brilliant, remarkably learned in the social sciences, especially economics and economic and legal history, always civil and considerate in discussions and debates,” writes Ralph Raico, “yet a feisty fighter for her libertarian ideas.”

Biden’s pick for assistant secretary of health forced nursing homes to accept patients with covid and wants to ration healthcare based on social justice.

With Biden, Get Ready For More "Regime Change"

No, the Chinese Won't Invade America If Secessionists Succeed

If the United States breaks up into smaller pieces, how will the new nations be able to defend themselves from the likes of China? Thanks to geography and wealth, even smaller American states would be well protected from Asian and European powers.