GET NEWS AND ARTICLES IN YOUR INBOXPrint
A
A
Home | Wire | Colonel House and Woodrow Wilson: Paving the Way for War

Colonel House and Woodrow Wilson: Paving the Way for War

[Editor's Note: This is part 4 of a multi-part series.]

In reconstructing the American decision to enter the Great War, the relationship between Colonel Edward Mandell House and his "alter ego," Woodrow Wilson, is crucial. Robert Higgs has called the Colonel "one of the most important Americans of the twentieth century." House played the central role in choosing and grooming Woodrow Wilson to become a presidential candidate, a role he relished. We could regard him as a significant historical actor even if this achievement had been his only one. But the rest of the story is that House became an "intimate" friend of Woodrow Wilson, Wilson's "alter ego," as the two liked to say. Wilson's chief of staff, Joseph Tumulty, testified to this close relationship, as did dozens of others. Ultimately, House would become a special roving emissary of Woodrow Wilson in Europe from 1914 onward. In this capacity, and through a large private network of highly influential friends, House's influence on American intervention in World War I can hardly be exaggerated. So who was this very important American?

House was a Texan. His father had immigrated to Texas in the early years of the state and had made a fortune as a blockade-runner during the American Civil War. Edward Mandell House was born in 1858 in Houston and attended elite secondary schools in England and the northeastern United States. Eventually, he ended up at Cornell University. When his father died in 1880, House returned to Texas and took over management of the family fortune of $500,000, something like eleven million dollars today. Not chicken feed, to be sure, but not a fortune that put him in the league of the individuals with whom he would soon be rubbing shoulders. Doing business in banking and railroads, House crossed paths with the J.P. Morgan more than once, and many other leading individuals of the day.

Before long, he left business to work in politics, but his aim was to work behind the scenes, to influence politics rather than leading as a figurehead. It may have been, as some biographers have suggested, that House considered his constitution as lacking the physical stamina for electioneering. But he certainly had a predilection for being the man behind the curtain in any case.

In Texas, House decided to back a gubernatorial candidate in 1890. For all House's railroad and oil connections, he chose the "trust-busting" populist Democrat "Big Jim" Hogg, and he was successful. Incidentally, it was a grateful Governor Hogg who appointed him an honorary state "Colonel," designation which House adopted proudly. But the Colonel had only just begun. Masterminding the elections of four Texas governors, House decided to go East just after the turn of the century to seek out a national candidate to groom for President.

House had long since collected a very large circle of wealthy individuals, including many in the rarefied world of J. P. Morgan — by all accounts he combined a kind of introverted public view and amazing social skills, including a very sharp sense of humor. Indeed, in his later years, a short memoir dwelt lovingly and in detail on the many elaborate practical jokes of his youth and indeed through his college years, almost all of them played in such a way as to demean and control. It is worth noting that many of them were essentially double manipulations which ended by tricking his own partners in crime. "Cruel sport if you like," wrote House in memoir years later, "but one fascinating to a half grown boy." In any case, he saved his most manipulative pranks for "some boastful, arrogant, conceited boy." Actual psychologists have pondered these passages House wrote. For the armchair psychologist, it is fascinating as well, considering House's manipulations recorded in his diaries for later historians.

By the time he entered politics, he had begun to embrace Progressivism, a doctrine of efficiency and wise leadership which was informed by the Positivist doctrine of French sociologist Auguste Comte. Progressivism became a widespread political movement in American life (as in the world as a whole), and in America it emanated from and came to characterize the wealthy and wise men of "efficiency" and "capital," chiefly from the Northeast. Indeed, in 1912 the Colonel would write a didactic novel ("not much of a novel," commented House himself to a friend). The book was Philip Dru, Administrator, whose protagonist would reshape the government of the United States, freeing it for reform by freeing it from the corrupt and ignorant element of an elected legislative branch, a constitutional element Comte himself saw as roadblock to "Positive" administration. 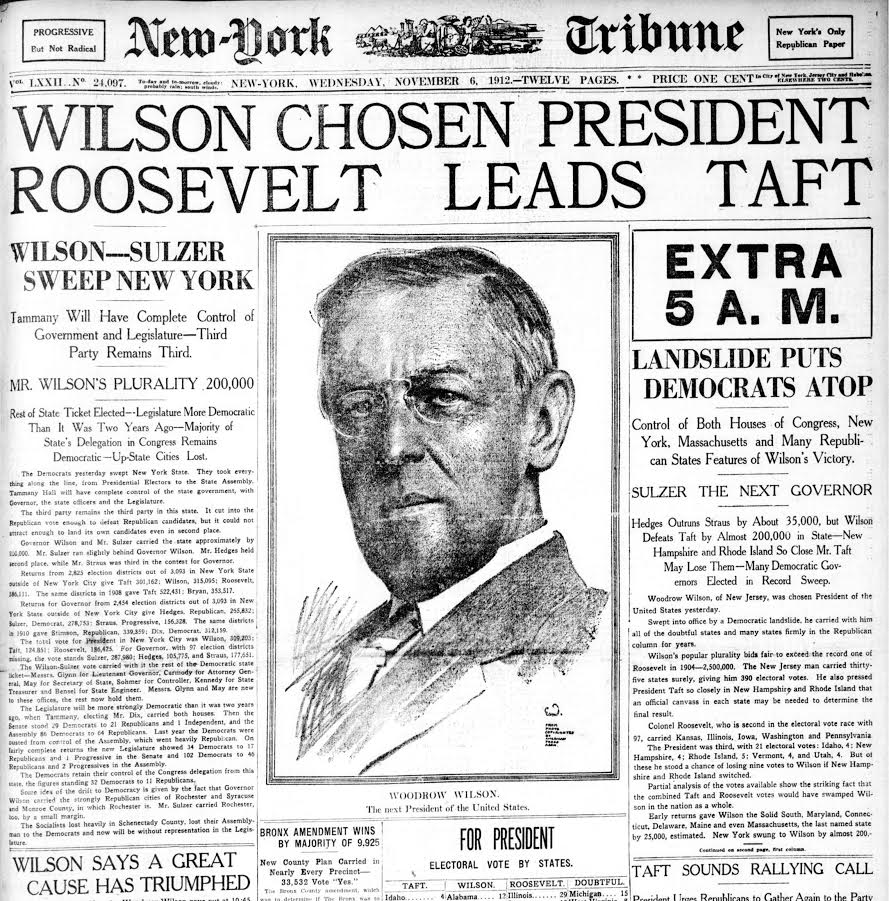 Living in New York, House found Woodrow Wilson, a Progressive one-term governor of New Jersey who had been an academic. Wilson served as President of Princeton, but entered New Jersey state politics, having left Princeton under heavy criticism for his high-handed reform of the curriculum and direction of the institution, condemned by many as a self-righteous, authoritarian leader who hated compromise. In late 1911, after a first "delightful visit" with Wilson, House wrote to a confidant, "He is not the biggest man I ever met, but he is one of the pleasantest and I would rather play with him than any prospective candidate I have seen."

House and Wilson were opposites in many ways. The quietly jovial, supercilious House and the formal, earnest but "pleasant" Wilson. The non-religious Texan admirer of heroic frontier men of violence and the Presbyterian minister's son whose life was circumscribed by a long line of church ladies. House, who reveled in recounting the practical jokes of his youth designed to belittle and control those around him, and Wilson, whose humor was of the quietest, most conventional kind. House, whose diary and letters universally groan with gourmet meals in the best restaurants with wine flowing, and the abstemious Wilson, who ate and drank little, preferring indeed to do that little within a quiet family circle.

Yet the two men had much in common. As many historians have pointed out, both were outsiders in terms of national politics, both late-comers to the Progressive political movement, both middle-aged Southerners, and both admirers of "vigor" and efficiency in individuals and government. Both men admired Great Britain with passion. Both men hoped to make a mark in life larger than the very respectable marks that each had already made. Both House and Wilson embodied those Comtean, Positivist elements of Progressivism that relied on the certainties of social science as a means of ruling. The great project of this odd couple and their Progressive associates was the efficient organization of the world in conjunction with the needs of the many, the few, the state, and the modern mind as a whole. Both House and Wilson consistently put their faith in wise men who would LEAD, as opposed to mere representatives of the people, such as congressmen and senators and the outmoded institutions these represented.

To make a long story short, the two became "intimates," as they were both fond of saying. After House helped get the one-term Governor elected President in 1912, a Washington insider asked the new President about House's apparent authority to make political commitments about the future. Wilson replied:"Mr. House is my second personality. He is my independent self. His thoughts and mine are one."

And from behind the scenes House ramrodded the new administration's legislation implementing the Federal Reserve and much else. His communications with the Governor, as he continued to address his presidential friend, were always flattering, always indirect, always purposeful, and full of sage advice. His role in managing William Jennings Bryan was especially important: gaining Bryan's endorsement the election, persuading Wilson to appoint him Secretary of State, keeping the unpredictable but powerful populist off balance and isolated from the President's inner circle.

But soon House found a still larger stage and with Wilson's agreement, roamed Europe with the full authority of the President's intimate and special emissary, meeting with kings, prime ministers, intellectuals, and others, "planting," as he said, “the seeds of peace." As Walter Millis pointed out in his 1935 analysis of House's "diplomatic" efforts, the Colonel was a supreme political operative in the United States, but knew European international politics a little, and the craft of diplomacy not at all. Millis suggested that for all the "seeds" the Colonel planted with European leaders, none of them had the least chance of germinating.

Once the war broke out in August 1914, House concentrated on putting Woodrow Wilson in a position to mediate the terrible war raging in Europe, a feat that would have made Wilson in some ways the chief benefactor of the world. Theodore Roosevelt had brokered the end to a much less extensive war (the Russo-Japanese conflict of 1904-5) and won the Nobel Peace Prize. Both House and Wilson considered Wilson the far greater man.

Of course any mediation by Wilson would come from a country that was supplying one side of the conflict exclusively with money, arms, ammunition, food, and other necessities of war. Even so, the Germans seemed tempted to take up Wilson's mediation offers at several points. Indeed, from Wilson's point of view, he made progress in mediation in the coming months and after more U-Boat sinkings of armed civilian vessels in designated zones. In the spring of 1916, he was able to pressure the Germans to drop their unlimited submarine warfare program.

In spite of increasing talk of "preparedness" and anti-German sentiment in the United States, Americans were on the whole far from ready to see their country intervene directly in the war. There was in any case, an election campaign to wage in 1916. But the stage was being set for American intervention in "the great crusade for democracy" being carried out by Britain, France, and the Russian "Tsar and Autocrat of All the Russias."

Yet long before 1916, three months before the Lusitania sinking, House had met in London with the British Foreign Secretary, Lord Grey, and made an amazing commitment. The Colonel had vague instructions from Wilson to persuade the British to lift the Blockade. Instead, as historian Justus Doenecke has commented, "Secretly defying the President, House uncritically supported Britain's war effort. More significantly, he committed his nation, under certain conditions, to enter the conflict on the Allied side."

A Brief History Of Secession Referenda in Europe

Texas Says It Can Enforce Immigration Restrictions. Texas Is Right

However one may feel about immigrants, both historical experience and an honest reading of the US Constitution makes it clear that the federal government is not, in fact, empowered to enforce immigration.

Why the US Supports Secession for Africans, but Not for Americans

If Bukele really wants monetary freedom for El Salvador, he should not have presented them with what, effectively, is a government handout for bitcoin hodlers and the companies behind the Strike app and other potential intermediaries.

How the Federalists Stacked the Deck to Win Ratification

The Federalists employed all the tricks: from delaying the postal delivery of Antifederalists' pamphlets to waging a propaganda war in the press. The Federalists also did their best to limit suffrage only to groups likely to vote for ratification.