GET NEWS AND ARTICLES IN YOUR INBOXPrint
A
A
Home | Wire | Central Banks Holding Steady, But Promise More Rate Hikes

In all cases — The Fed, the Bank of Canada, the BofE, the BOJ, and the Bank of Australia — central bankers said they expected to raise rates more in the near future. Even at the Bank of Japan, which has been especially dovish and pro-QE in recent years, the bank scaled back QE a tiny bit: 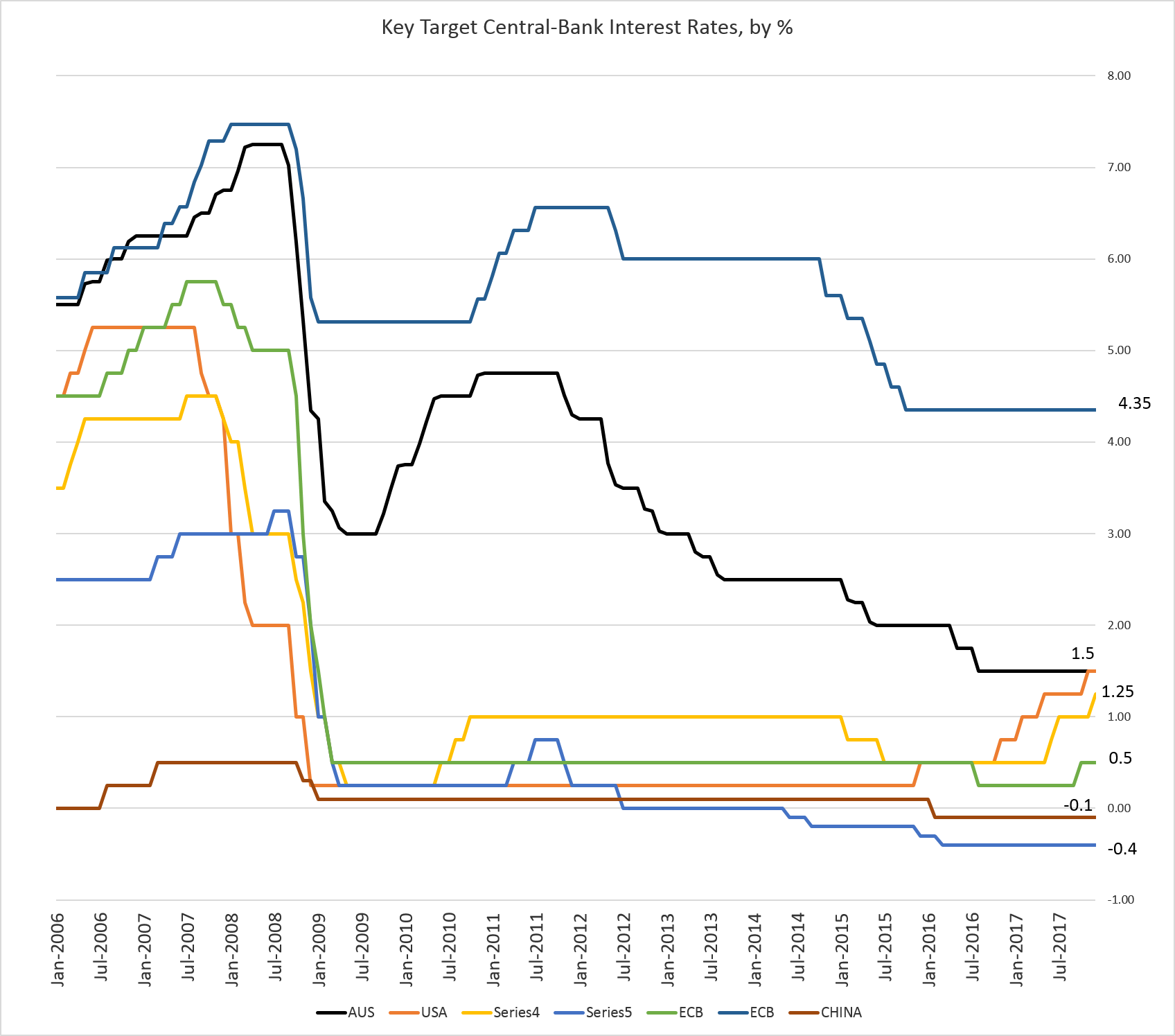 After years of blistering asset purchases, the Bank of Japan disclosed today that total assets on its balance sheet actually inched down by ¥444 billion ($3.9 billion) from the end of November to ¥521.416 trillion on December 31. While small, it was the first month-end to month-end decline since the Abenomics-designed “QQE” kicked off in late 2012.

The Bank of Canada has perhaps been the most aggressive at raising rates, with three rate hikes since July.

But, in all cases, rates remain well below where they were in 2008 before the financial crisis. We're now entering the tenth year of low-low interest-rate policy and Quantitative Easing. And even though we're hearing constantly about how the global economy is red hot, it appears the most central banks are still reluctant to get anywhere near what might be properly called "normalization."

One big exception to the claims of more rate hikes is the European Central Bank which isn't even talking about optimism at this point. Unlike other central banks, the ECB is already saying it might have to miss its self-imposed deadlines for unwinding QE:

The European Central Bank's top economist has warned that its bond-buying efforts will have to continue beyond the planned deadline of September, if inflation does not pick up.

Inflation has remained well short of the central bank's target of close to, but below, 2pc in recent years. Monthly data released at the end of January revealed that prices had risen by 1.3pc, the lowest reading since July 2017. The ECB has also warned that it expects inflation to slow in the next few months.

The European economy continues to be nothing to write home about, but even if things were better, it's hard to see how the ECB, faced with so many debt heavy regimes in Europe, would be willing to raise interest rates and put European governments on the hook for higher payments on their debts.

Using their conventional measures of inflation, central banks continue to see muted growth, which is partly why they refuse to budge much on their QE and key rates. Asset prices, however, continue to rise, with home prices reaching new highs in the US and — until this week, at least — stock prices were moving up rapidly.

With interest rates so far below where they were at the beginning of the last financial crisis, it's hard to see where central banks will go the next time a recession hits. The likely outcome is only small movement in interest rates, with more reliance on central-banks buying assets.

The Fed's Bill Dudley, however, maintains that the economy is still strong, and there's plenty of time and room to bring rates up. This week's mini-crash was only "small potatoes" according to Dudley.

Here are the specific key rates discussed here, with links: