GET NEWS AND ARTICLES IN YOUR INBOXPrint
A
A
Home | Wire | Bank of Canada Holds Overnight Rate at 0.5%, Following Multiple Cuts in 2015

Last week, the Bank of Canada announced it would stay at 0.5 percent for its target overnight rate (the equivalent of the Federal Funds Rate in the US).

Many had believed that the BOC was leaning toward another rate cut, but those seeking an additional cut to stimulate Canada's troubled economy were disappointed. The dropping oil price has heavily impacted Canada's economy, just as it has been taking its toll on oil-industry-heavy Western states in the US.

The overnight rate was cut twice in 2015. From 1.0 to 0.75 in January 2015 and again to 0.5 in July. While the recent hold-steady policy provides a respite from 2015's cuts, the overnight rate has been at very low levels since 2009. the BOC has been relatively hawkish compared to the Fed, although not by much: 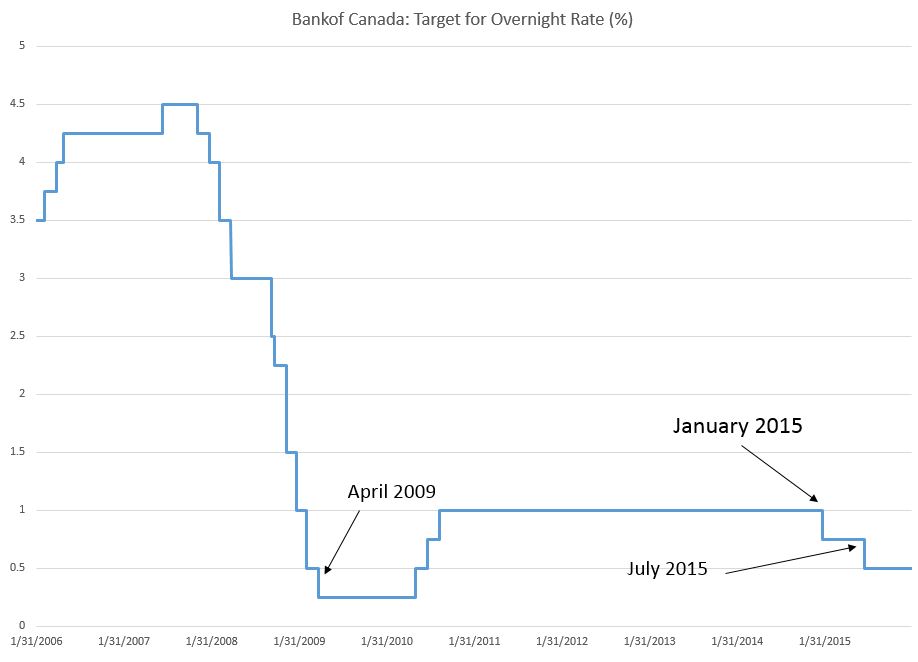 Now, unless you count the EU as a whole, Canada remains the US's largest trading partner. So what happens to the Canadian economy does indeed matter to American investors and consumers.

However, fortunately for Canadians, and for Americans who are adept at investing in Canada, Canada's economy has been relatively stable in recent years. Canada avoided the a collapse in housing markets, and in the wake of the 2008 financial crisis, Canada was said to have "gotten things right."

Indeed, Canada's central bank had pursued easy money less aggressively than the US in the early years of what would become the US housing bubble, possibly lessening the effects of malinvestment into the housing sector.

And the BOC has generally been more stable in terms of its overnight rate: 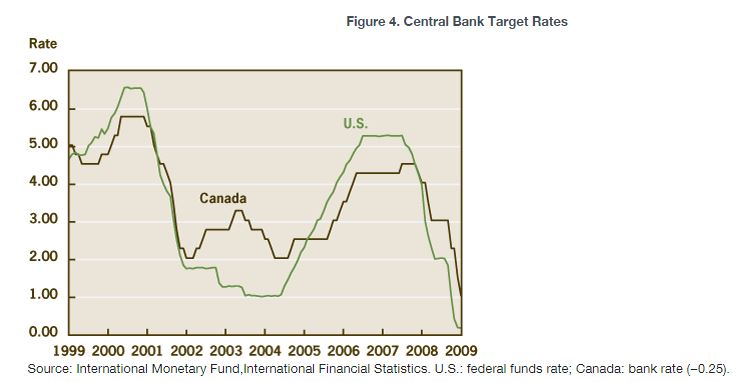 However, even independent of all the internal issues that might have effect on central bank policy, it's also important to remember that central banks to indeed coordinate with each other to mask the effects of monetary inflation.

This has been the case for at least a century, and was explicit by the 1920s. In 1922, at the Genoa conference, central banks had agreed to coordinate. Jörg Guido Hülsmann sums up Ludwig von Mises's opinion of these moves toward coordination:

Mises stated in plain language what coordination meant: the coordinated central banks would increase their note issues in concert, thus avoiding the embarrassment of the falling exchange rates that inevitably result from unilateral inflation. Coordination of national inflation policies in order to suppress one of the main symptoms of monetary decay has remained the state of the art to this day. For debtors in a very inflationary currency area, cooperation between the central banks is a boon. Without foreign assistance, the exchange rate of their currency would constantly fall and thus it would be next to impossible to obtain foreign credit. Central bank cooperation solves this problem, at the expense of creditors or would-be debtors in the more stable countries.

For example, if Canada were to simply go its own way from the Fed and allow higher interest rates for creditors right next door, yield-starved American investors might find the offer very tempting indeed, and capital would flow north. Fortunately, though, the Fed has a friend in the BOC that can be counted on to keep the Canadian dollar from getting too uppity. That has advantages in terms of tourism, of course, but from the Fed's point of view, isn't it convenient that the BOC's policies look so much like its own?

Nowadays, of course, there are genuine concerns about the Canadian economy "headed off a cliff." Given that the US exported more than 260 billion dollars worth of goods to Canada last year, that's not great news for the USA, either.

Argentina and Brazil Look to Establish a Common Currency

Two nations famous for hyperinflation now look to create a common currency. Unless that currency is gold, this is a bad idea.