GET NEWS AND ARTICLES IN YOUR INBOXPrint
A
A
Home | Wire | Are Markets Really as Calm as they Seem?

Are Markets Really as Calm as they Seem?

Tags Booms and BustsMoney and Banking

Indicators for financial market "stress" have reached their lowest levels in decades. For instance, stock market volatility has never been this low since the early 1990s. Credit spreads have been shrinking, and prices for credit default swaps have fallen to pre-crisis levels. In fact, investors are no longer haunted by concerns about the stability of the financial system, potential credit defaults, and unfavourable surprises in the economy or financial assets markets. How come? 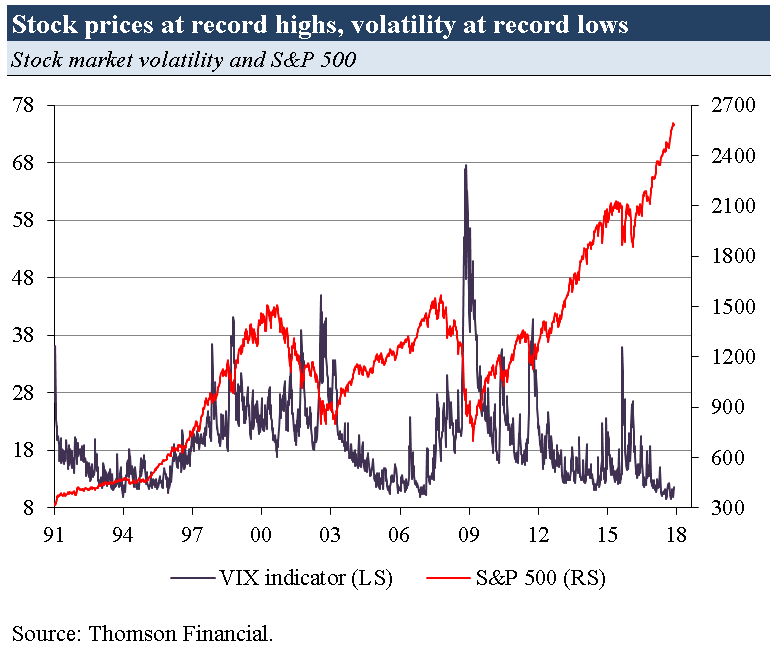 Monetary policy plays the significant role. By slashing interest rates and ramping up the quantity of money in the banking system, central banks around the world have kick-started the economies following the 2008/2009 crash. But this is not the full story. The fact that investors expect central banks to stand at the ready to fend off a slowdown of the economy and price declines in stock and housing markets is by no means less important.

The truth is that investors expect central banks to provide a "safety net." This expectation encourages them to make risky investments again (which they would otherwise have declined). That said, central banks have caused a colossal ‘moral hazard’: Investors feel pretty much assured that the risk-reward profile of their investments has become more favorable — that they can enjoy a considerable upside, while the downside is limited.

As a result, investors drive asset prices upwards. As stock prices rise, firms' cost of capital falls, encouraging risky investments. Consumers, with their real estate assets appreciating, go into even more debt. Maturing debt is rolled over at low interest rates, and borrowers’ spending capacity increases. In other words: The downward manipulation of interest rates and the decline in risk aversion translates into a cyclical strengthening of the economy.

But wait: Will the Fed's hiking of interest rates and the planned shrinking of its balance sheet not undo the very forces that have pushed economic activity back into positive territory? No, not necessarily. The crucial point is the Fed’s safety net: If investors continue to assume that the Fed willingly remains the ‘lender of last resort’, even a monetary policy of some short-term interest rate hiking is unlikely to do much harm to the current recovery.

Here is why: If things turn sour, the Fed is expected to reverse its restrictive monetary policy. This may well explain why financial markets have remained rather relaxed in the light of the Fed's current hiking cycle, which has begun back in December 2015. And markets haven’t become unsettled because of the Fed’s plan to shrink its bloated balance sheet, which means, inter alia, a reduction of liquidity in the US banking system and the quantity of money.

Many people welcome output and employment gains, coupled with decent investment returns in asset markets, which have been brought about by the Fed’s ultra-expansionary monetary policy. However, the downside of all this should not be overlooked. Central banks around the world, under the leadership of the Fed, have in fact orchestrated yet another artificial boom — which, sooner or later, will falter and turn into bust.

This is, by no means, a pessimistic prediction. But it is based on sound economics: A policy of artificially lowered interest, a relentless increase in the quantity of money and politically manipulated market prices simply cannot bring about greater prosperity and higher employment in the long run. To think so is delusional. The truth is that such a monetary policy will cause another round of trouble further down the road.

Higher interest rates have the potential to make the credit pyramid coming crashing down. They would make it hard for many consumers to service their debt, would reveal malinvestment and result in corporate losses, and stock and housing prices would ultimately follow the law of gravity. Credit markets could become jittery as borrowers run the risk of defaulting on their debt, with banks having limited capacity to absorb payment losses in their loan books.

This is the scenario if central banks take away the Halloween candy (aka low interest rates). Higher interest rates are one thing. Another thing is the flattening of the yield curve (meaning the difference between long- and short-term yields). A decline in the yield curve makes banks to reign in their credit supply. As bank credit supply dries up, financial market liquidity drops. The party comes to an end. Asset prices start nosediving. 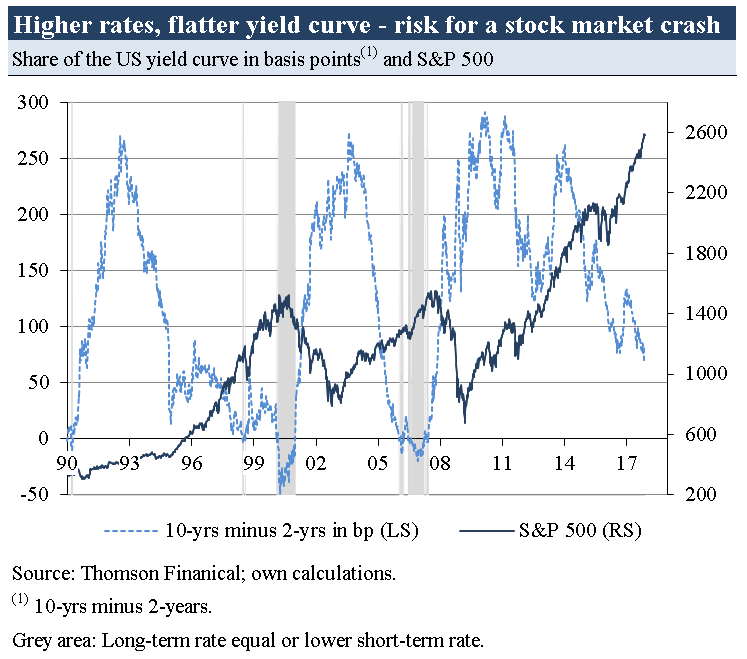 But maybe this time is different? Perhaps there is good reason to expect that the Fed will bring up interest rates just a little bit and not too much? By pursues a policy of bringing interest rates back up very slowly, the Fed makes it somewhat easier for debtors and the whole economy to adjust to a regime of higher borrowing and capital costs. As the extreme low level of volatility indicates, markets expect the Fed to succeed in avoiding the next crash.

The Fed's slow and gradual approach to tighten monetary policy might indeed be reducing the risk that it could "be raising interest rates too much too fast," pricking the credit bubble, and bringing down the house of (credit) cards. However, a considerable risk remains that the Fed will once again turn the boom into bust. And let’s be honest: In view of its track record, there is little reason to expect that the Fed won’t mess things up this time.

The empty shopping mall: a story of how government actions created a huge malinvestment in western Pennsylvania.

How Fast Should the Money Supply Grow?

As Murray Rothbard wrote, inflation is not an increase in prices. It is, instead, an increase in the supply of money in circulation. The distinction is important.

Objection, Professor Harari! Logic Proves the Existence of Free Will

Yuval Noah Harari, who teaches history at Hebrew University in Jerusalem, denies that free will exists. However, to...