When World War I began, many analysts believed that the international gold standard would keep the war short. A war of attrition was not thought to be possible because the disciplining effects of the gold standard — capital flight and gold outflow — were supposed to restrain the ability of states to mobilize resources in times of war. As many believed at the time, states under the gold standard would quickly run out of money to pay for soldiers and resources. No one ever imagined that the war would last four long years and that most countries would stop using the gold standard, turning instead to debt and inflation to pay for the war.

The gold standard was never the same after World War I. It survived in a modified form until August 15, 1971 — 45 years ago this month — when President Nixon cut the last link between the world monetary system and gold. The initial idea was to temporarily suspend the limited convertibility that existed; only governments could request reimbursements of gold against dollars. Unfortunately, there is nothing more permanent than temporary emergency measures. We are still living with a 45-year-old monetary experiment in which central banks have no direct link to gold.

Why was the Gold Standard Suspended?

Convertibility acts as a mechanism that constrains the arbitrariness of the monetary authorities. The United States dollar was little more than a promise made by the US government — or its central bank — to deliver a specific amount of gold: one ounce of gold for every $35.

If governments plan to spend more than they earn, they are forced to issue debt. If a government’s debt level is already too high, the market might refuse to keep lending or might only lend with very high interest rates. If this happens, governments can then turn to their central banks to monetize the debt; for example, a new currency may be issued against the debt that the market would not buy.

If monetizing debt reaches high levels, inflation quickly follows. However, the inflationary mechanism will differ depending on whether or not there is convertibility:

Debt monetization is a way of introducing the debt rejected by the market in monetary form in the absence of currency convertibility. It works as follows: The government spends more than it earns, issuing debt which is not accepted by the market. The central bank then takes it over and extends a new currency. The new currency is the recipient of the rejected debt. Inflation is nothing more than excess of public spending made into a currency.

If the gold standard and the currency convertibility are really a restraint to public spending and inflation, then it should be seen in the pre-1971 and post-1971 figures.

The period from 1951 to 1971 had an average federal deficit to GDP of 0.6%. From 1972 to 2015, this figure rose to 3.0%. These numbers suggest that the gold standard effectively controlled public debt, as the risk of gold loss by the central bank would have prevented debt monetization. 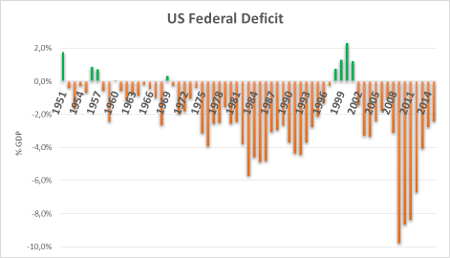 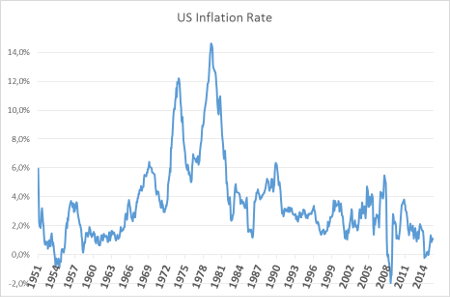 Therefore, the record of the current monetary standard — floating rates — has a dismal record compared to the last gold standard.

It is important to clarify the concept of the “last gold standard,” the modified gold standard that followed World War I. In the classic gold standard that existed prior to 1914, the general public was able to withdraw gold from the central bank if they wished. This was gradually restricted until after World War II, when only states could redeem coins in gold (everything was reduced to dollars and the exchange of gold for dollars was left to other states). Beginning in 1971, gold completely disappeared from the picture.

For ordinary people, the result is an inability to maintain their wealth without risk. With gold as the monetary base, the saver has three possibilities:

In a system without convertibility, like the one we have lived in since 1971, the third option disappears. In other words, if a person thinks the economy is entering a recession (economic instability) and that the monetary authorities are behaving irresponsibly by, for example, monetizing too much debt (monetary instability), she is forced to choose between losing her assets with an investment project or by keeping liquid balances that will depreciate as a result of careless monetary policy.

Economic agents who want to protect themselves against inflation must either forcibly buy illiquid real assets — capital goods or real estate — with the danger of losing them (because of economic or housing crises) or maintain a currency that will lose its value because of bad monetary policy. Leaving the system by remaining liquid is no longer an option, effectively turning everyone into a speculator.

Gold, a Protection Against Abuse

In short, gold acts as protection against fiscal and monetary abuses by governments. The proof of this is that both public deficit and inflation have dramatically increased since the gold standard ended.

Moreover, it forces economic agents to find other forms of non-monetary wealth to store their assets. Less risky agents will be hurt the most, because instead of keeping their assets in cash, inflation will push them to speculate on the purchase of assets and force them to take risks that they never intended to take.

These past 45 years have been a monetary experiment that has not ended well.

This article was first published by Universidad Francisco Marroquín. Reprinted with permission by the author.

Daniel Fernández Méndez is a lecturer in economics at Francisco Marroquín University in Guatemala and is director of UFM Market Trends, an economics/finance newsletter. Contact: email.

William L. Anderson is a professor emeritus of economics at Frostburg State University in Frostburg, Maryland. He...