To suppose all consumers to be dupes, and all merchants and manufacturers to be cheats, has the effect of authorizing them to be so, and of degrading all the working members of the community.

A. R. J. Turgot's career in economics was brief but brilliant, and in every way remarkable. In the first place, he died rather young, and second, the time and energy he devoted to economics was comparatively little. He was a busy man of affairs, born in Paris to a distinguished Norman family which had long served as important royal officials. Turgot's father, Michael-Etienne, was a Councillor of the Parliament of Paris, a master of requests, and top administrator of the city of Paris. His mother was the intellectual and aristocratic Dame Magdelaine-Francoise Martineau.

Turgot had a sparkling career as a student, earning honors at the Seminary of Saint-Sulpice, and then at the great theological faculty of the University of Paris, the Sorbonne. As a younger son of a distinguished but not wealthy family, Turgot was expected to enter the Church, the preferred path of advancement for someone in that position in eighteenth-century France. But although he became an Abbe, Turgot decided instead to become magistrate, master of requests, intendant, and, finally, a short-lived and controversial minister of finance (or "controller-general") in a heroic but ill-fated attempt to sweep away statist restrictions on the market economy in a virtual revolution from above.
Not only was Turgot a busy administrator, but his intellectual interests were wide-ranging, and most of his spare time was spent in reading and writing, not in economics, but in history, literature, philology, and the natural sciences. His contributions to economics were brief, scattered, and hasty. His most famous work, "Reflections on the Formation and Distribution of Wealth" (1766), comprised only fifty-three pages. This brevity only highlights the great contributions to economics made by this remarkable man.
In the history of thought, the style is often the man, and Turgot's clarity and lucidity of style mirrors the virtues of his thought, and contrasts refreshingly to the prolix and turgid prose of the physiocrat school.

One of the striking examples of injustice in the historiography of economic thought is the treatment accorded to Turgot's brilliant analysis of capital and interest by the great founder of Austrian capital-and-interest theory, Eugen von Böhm-Bawerk. In the 1880s, Böhm-Bawerk set out, in the first volume of his Capital and Interest, to clear the path for his own theory of interest by studying and demolishing previous, competing theories. Unfortunately, instead of acknowledging Turgot as his forerunner in the pioneering Austrian theory, Böhm-Bawerk brusquely dismissed the Frenchman as a mere physiocratic land-productivity theorist. This unfairness to Turgot is all the more heightened by recent information that Böhm-Bawerk, in his first evaluation of Turgot's theory of interest in a still-unpublished seminar paper in 1876, reveals the enormous influence of Turgot's views on his later developed thought. Perhaps we must conclude that, in this case as in others, Böhm-Bawerk's need to claim originality and to demolish all of his predecessors took precedence over the requirements of truth and justice.

In the light of Böhm-Bawerk's mistreatment, it is heart-warming to see Schumpeter's appreciative summation of Turgot's great contributions to economics. Concentrating almost exclusively on Turgot's "Reflections," Schumpeter declares that his theory of price formation is "almost faultless, and, barring explicit formulation of the marginal principle, within measurable distance of that of Böhm-Bawerk." The theory of saving, investment, and capital is "the first serious analysis of these matters" and "proved almost unbelievably hardy. It is doubtful whether Alfred Marshall had advanced beyond it, certain that J.S. Mill had not. Böhm-Bawerk no doubt added a new branch to it, but substantially he subscribed to Turgot's proposition." Turgot's interest theory is "not only by far the greatest performance . . . the eighteenth century produced but it clearly foreshadowed much of the best thought of the last decades of the nineteenth."

History of the Austrian School of EconomicsPricesValue and Exchange

03/17/2011BooksA.R.J. Turgot
Murray Rothbard considered Turgot one of the greatest economists of all time and one of the foremost classical liberals of the eighteenth century. He extended economic theory beyond the Physiocrats, defended free trade, anticipated the notion of opportunity cost, developed an early concept of...
Formats 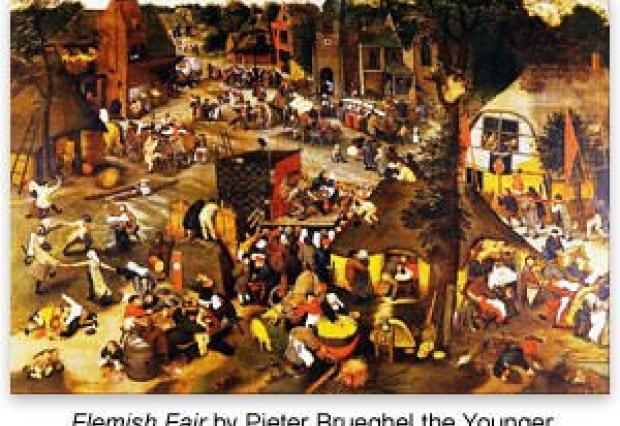 The Fundamental Difference between Fairs and Markets

06/07/2011Mises Daily ArticlesA.R.J. Turgot
Turgot explains (in a dazzling way) how a fair results from government intervention and how a market is the real thing.
Read More

History of the Austrian School of EconomicsPricesValue and Exchange

03/17/2011BooksA.R.J. Turgot
Murray Rothbard considered Turgot one of the greatest economists of all time and one of the foremost classical liberals of the eighteenth century. He extended economic theory beyond the Physiocrats, defended free trade, anticipated the notion of opportunity cost, developed an early concept of...
Formats

Murray Rothbard considered Turgot one of the greatest economists of all time and one of the foremost classical...

The Fundamental Difference between Fairs and Markets

Turgot explains (in a dazzling way) how a fair results from government intervention and how a market is the real thing.