GET NEWS AND ARTICLES IN YOUR INBOXPrint
A
A
Home | Mises Library | But Wouldn't Warlords Take Over?

But Wouldn't Warlords Take Over? 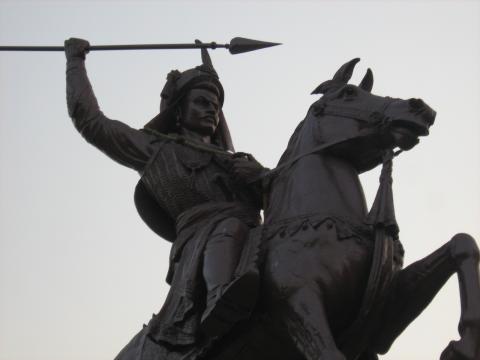 On two separate occasions in the last couple of weeks, people have asked me a familiar question:  “In a system of ‘anarcho-capitalism’ or the free-market order, wouldn’t society degenerate into constant battles between private warlords?”  Unfortunately I didn’t give adequate answers at the times, but I hope in this article to prove the adage that later is better than never.

When dealing with the warlord objection, we need to keep our comparisons fair. It won’t do to compare society A, which is filled with evil, ignorant savages who live under anarchy, with society B, which is populated by enlightened, law-abiding citizens who live under limited government.  The anarchist doesn’t deny that life might be better in society B.  What the anarchist does claim is that, for any given population, the imposition of a coercive government will make things worse.  The absence of a State is a necessary, but not sufficient, condition to achieve the free society.

To put the matter differently:  It is not enough to demonstrate that a state of private-property anarchy could degenerate into ceaseless war, where no single group is strong enough to subjugate all challengers, and hence no one can establish “order.”  After all, communities living under a State degenerate into civil war all the time.  We should remember that the frequently cited cases of Colombia and now Iraq are not demonstrations of anarchy-turned-into-chaos, but rather examples of government-turned-into-chaos.

For the warlord objection to work, the statist would need to argue that a given community would remain lawful under a government, but that the same community would break down into continuous warfare if all legal and military services were privatized.  The popular case of Somalia, therefore, helps neither side.1  It is true that Rothbardians should be somewhat disturbed that the respect for non-aggression is apparently too rare in Somalia to foster the spontaneous emergence of a totally free market community.  But by the same token, the respect for “the law” was also too weak to allow the original Somali government to maintain order.

Now that we’ve focused the issue, I think there are strong reasons to suppose that civil war would be much less likely in a region dominated by private defense and judicial agencies, rather than by a monopoly State.  Private agencies own the assets at their disposal, whereas politicians (especially in democracies) merely exercise temporary control over the State’s military equipment.  Bill Clinton was perfectly willing to fire off dozens of cruise missiles when the Lewinsky scandal was picking up steam.  Now regardless of one’s beliefs about Clinton’s motivations, clearly Slick Willie would have been less likely to launch such an attack if he had been the CEO of a private defense agency that could have sold the missiles on the open market for $569,000 each .2

We can see this principle in the case of the United States.  In the 1860s, would large scale combat have broken out on anywhere near the same scale if, instead of the two factions controlling hundreds of thousands of conscripts, all military commanders had to hire voluntary mercenaries and pay them a market wage for their services?

I can imagine a reader generally endorsing the above analysis, yet still resisting my conclusion.  He or she might say something like this:  “In a state of nature, people initially have different views of justice.  Under market anarchy, different consumers would patronize dozens of defense agencies, each of which attempts to use its forces to implement incompatible codes of law.  Now it’s true that these professional gangs might generally avoid conflict out of prudence, but the equilibrium would still be precarious.”

“To avoid this outcome,” my critic could elaborate, “citizens put aside their petty differences and agree to support a single, monopoly agency, which then has the power to crush all challengers to its authority.  This admittedly raises the new problem of controlling the Leviathan, but at least it solves the problem of ceaseless domestic warfare.”

There are several problems with this possible approach.  First, it assumes that the danger of private warlords is worse than the threat posed by a tyrannical central government.  Second, there is the inconvenient fact that no such voluntary formation of a State ever occurred.  Even those citizens who, say, supported the ratification of the U.S. Constitution were never given the option of living in market anarchy; instead they had to choose between government under the Articles of Confederation or government under the Constitution.

But for our purposes, the most interesting problem with this objection is that, were it an accurate description, it would be unnecessary for such a people to form a government.  If, by hypothesis, the vast majority of people—although they have different conceptions of justice—can all agree that it is wrong to use violence to settle their honest disputes, then market forces would lead to peace among the private police agencies.

Yes, it is perfectly true that people have vastly different opinions concerning particular legal issues.  Some people favor capital punishment, some consider abortion to be murder, and there would be no consensus on how many guilty people should go free to avoid the false conviction of one innocent defendant.  Nonetheless, if the contract theory of government is correct, the vast majority of individuals can agree that they should settle these issues not through force, but rather through an orderly procedure (such as is provided by periodic elections).

But if this does indeed describe a particular population, why would we expect such virtuous people, as consumers, to patronize defense agencies that routinely used force against weak opponents?  Why wouldn’t the vast bulk of reasonable customers patronize defense agencies that had interlocking arbitration agreements, and submitted their legitimate disputes to reputable, disinterested arbitrators?  Why wouldn’t the private, voluntary legal framework function as an orderly mechanism to settle matters of “public policy”?

Again, the above description would not apply to every society in history.  But by the same token, such warlike people would also fail to maintain the rule of law in a limited State.

A sophisticated apologist for the State—especially one versed in mainstream economics—might come back with yet another justification:  “The reason a limited government is necessary is that we can’t trust the market to adequately fund legitimate police forces.  It may be true that 95 percent of a population would have similar enough views with respect to justice such that peace would obtain if they all contributed substantially to defense agencies dedicated to enforcing their views.”

“However,” the apologist could continue, “if these police agencies have no right to extract contributions from everyone who endorses their actions, then they will be able to field a much smaller force.  The market fails specifically because of the free rider problem:  When a legitimate firm cracks down on a rogue agency, all law abiding people benefit, but in a free market they would not be obliged to pay for this ‘public good.’  Consequently, rogue agencies, funded by malevolent outlaws, will have a much wider scope of operation under anarchy.”

Again, there are several possible replies to such a position.  First, let us reflect that a large standing army, ready to crush minority dissenters, is not an unambiguously desirable feature of government.

Second, the alleged problem of free riders would not be nearly as disastrous as many economists believe.  For example, insurance companies would “internalize the externalities” to a large degree.  It may be true that an “inefficient” number of serial killers would be apprehended if the relevant detective and police agencies had to solicit contributions from individual households.  (Sure, everyone gets a slight benefit from knowing a serial killer has been caught, but whether or not one person contributes probably won’t make the difference between capture or escape.)

Yet insurance companies that each held policies for thousands of people in a major city would be willing to contribute hefty amounts to eliminate the menace of a serial killer.  (After all, if he kills again, one of these companies will have to pay out hundreds of thousands of dollars to the estate of the victim.)  The same reasoning demonstrates that the free market could adequately fund programs to “contain” rogue agencies.

Third, people need to really picture the nightmare scenario to see how absurd it is.  Imagine a bustling city, such as New York, that is initially a free market paradise.  Is it really plausible that over time rival gangs would constantly grow, and eventually terrorize the general public?3  Remember, these would be admittedly criminal organizations; unlike the city government of New York, there would be no ideological support for these gangs.

We must consider that in such an environment, the law-abiding majority would have all sorts of mechanisms at their disposal, beyond physical confrontation.  Once private judges had ruled against a particular rogue agency, the private banks could freeze its assets (up to the amount of fines levied by the arbitrators).  In addition, the private utility companies could shut down electricity and water to the agency’s headquarters, in accordance with standard provisions in their contracts.

Of course, it is theoretically possible that a rogue agency could overcome these obstacles, either through intimidation or division of the spoils, and take over enough banks, power companies, grocery stores, etc. that only full-scale military assault would conquer it.  But the point is, from an initial position of market anarchy, these would-be rulers would have to start from scratch.  In contrast, under even a limited government, the machinery of mass subjugation is ready and waiting to be seized.

The standard objection that anarchy would lead to battling warlords is unfounded.  In those communities where such an outcome would occur, the addition of a State wouldn’t help.  Indeed, the precise opposite is true:  The voluntary arrangements of a private property society would be far more conducive to peace and the rule of law, than the coercive setup of a parasitical monopoly government.