GET NEWS AND ARTICLES IN YOUR INBOXPrint
A
A
Home | Mises Library | The Worst Recession in 25 years?

The Worst Recession in 25 years? 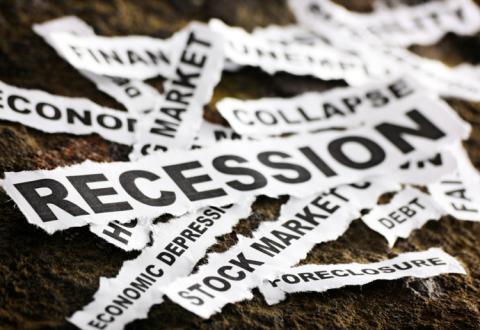 On September 18 the Fed cut its target for the fed funds rate by 50 basis points (0.5 percentage points), from 5.25% to 4.75%. The move surprised many analysts who had been expecting a more modest cut of 25 basis points.

For those versed in the Austrian theory of the business cycle, as developed by Ludwig von Mises and elaborated by Friedrich Hayek, the aggressive Fed "stimulus" is ominous indeed. Not only will it pave the way for much higher price inflation than Americans have seen in decades, but it will also exacerbate what could be the worst recession in twenty-five years.

How the Fed "Sets" Interest Rates

Before discussing the history of interest rate manipulation by the Fed, a primer will be useful. When people say the Fed did such-and-such to "interest rates," they are specifically referring to the Fed's target for the federal funds rate. The Federal Reserve itself is neither a borrower nor a lender in this market; the fed funds rate is the interest rate that banks charge each other for overnight loans of reserves. Recall that in our fractional reserve banking system, the Fed mandates that banks keep a certain amount of reserves (either cash in the vault or deposits with the Fed itself) in order to "back up" their total outstanding deposits. At any given time, some banks have more reserves than they need, while others have less. The banks with excess reserves can thus loan them to those with deficient reserves, and the (annualized) interest rate is the fed funds rate.

Now a further complication: the Fed itself does lend reserves to banks, but it does this at the so-called "discount window," and the relevant interest rate is the discount rate. In recent years the Fed has traditionally maintained a margin between the fed funds target and the discount rate, in order to encourage banks to borrow from each other, rather than coming hat in hand to the (more expensive) Fed. Some readers may recall in mid-August that the Fed slashed the discount rate (not the fed funds rate) and encouraged banks to borrow from it in an effort to restore liquidity and calm to the credit markets.

It is clear enough how the Federal Reserve can set the discount rate: since the Fed is the one loaning these reserves, it can insist on any rate it wants. (Of course, if the rate were too high it might not get any takers.) But how does the Fed influence the federal funds rate, if it doesn't directly participate in this market? Is the target enforced the way, say, the government in some areas controls apartment rents or minimum wages?

The process is much more complicated. Very briefly: the Fed can control the quantity of reserves held by banks, and thus indirectly can control the price the banks charge each other for lending out reserves. If the Fed thinks banks are charging each other too much for reserves — in other words, if the actual fed funds rate is higher than the target — then the Fed will engage in an "open market operation," buying assets such as US Treasury bonds from banks. The Fed pays for these purchases by adding numbers to the accounts the selling banks have with the Fed.

This is the precise point of entry for the new money that the Fed creates out of thin air. To repeat: When the Fed buys (say) $1 million in bonds from Bank XYZ, Bank XYZ surrenders ownership of the bonds but sees that its deposits of reserves at the Fed go up by $1 million. But the Fed didn't transfer this money from some other account. No, it simply increased the electronic entry representing Bank XYZ's total reserves on deposit. There is no offsetting debit anywhere in the banking system. Bank XYZ now has $1 million more in reserves, while no other bank has less. Bank XYZ is now free to go out and loan more reserves to other banks, or to make loans to its own customers. (In fact, due to the fractional-reserve system, the bank could make up to $10 million in new loans to customers.) The money supply has increased, putting upward pressure on prices measured in dollars.

But back to our original theme, the injection of reserves obviously increases their supply and thus (other things equal) pushes down the rate Bank XYZ will charge other banks who might want to borrow reserves from it. The open market operation has thus achieved the Fed's goal of pushing the actual fed funds rate down to the desired target. Of course, going the opposite way, if the actual fed funds rate were too low, the Fed would sell assets to the banks, thereby destroying some of the total reserves in the system.

According to Ludwig von Mises and his followers, the boom-bust cycle is not inherent in the free market, but is rather caused by the government's interference in the credit markets, specifically its manipulation of interest rates. The government causes the boom period when it injects new credit into the system (pushing down rates), and then the unsustainable, non-economic investment projects put into motion necessitate a bust at some future date. (Here is a reading plan for this topic.)

The following chart illustrates the Misesian explanation. Note the chart does not include the recent September cut. 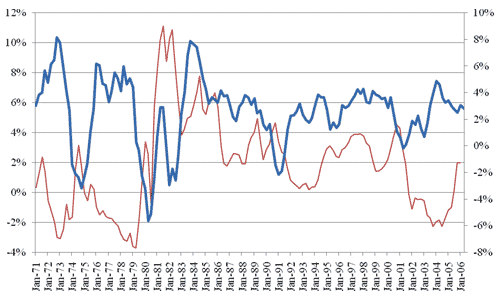 Generally speaking, the chart indicates an inverse relationship between the two series. This accords with the commonsense view that cutting interest rates provides a stimulus while hiking them is contractionary. However, what the Austrian approach provides is the understanding of the real forces behind the boom-bust cycle. In other words, most financial commentators think that today's interest rates affect today's economic growth, end of story. But if a previous boom period has led to massive malinvestments, there must be a bust period to liquidate the various projects (for which there is an inadequate capital structure to complete).

To put it another way, many commentators seem to believe that if the Fed held interest rates low indefinitely, then we'd never have high unemployment, just rampant price inflation. And yet, the recent experience shows that this is dead wrong. The Fed didn't cause the recent problems by "responsibly" hiking interest rates. No, rates had been steady at 5.25% for some time, and then the housing bubble burst and the mortgage market faltered, thus "forcing" the Fed to take action.

Looking back at the chart above, we can see why the worst may be yet to come. In (price) inflation-adjusted terms, the early-2000s levels of the actual fed funds rate is the lowest since the Carter years. And many readers may recall the severe recessions of 1980 and 1982 that followed that period.

In the Austrian view, the boom-bust cycle is caused by the Fed's maintenance of artificially low interest rates, which causes businesses to expand, hire workers, buy other resources, and so forth, even though these projects are not justified by the true supply of savings in the economy. The greater the "stimulus" the worse the malinvestments.

From 2001–2004, the Fed kept (real) rates at the lowest they've been since the late 1970s. One of the consequences that has already manifested itself is the housing bubble. But a more severe liquidation seems unavoidable. The recent Fed cut may postpone the day of reckoning, but it will only make the adjustment that much harsher.