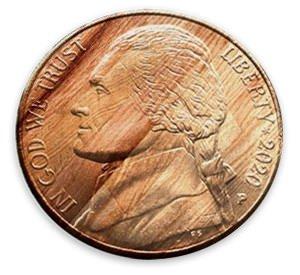 "Don't take any wooden nickels" was an admonition to be careful in your dealings because someone might try to pay you with worthless money. Wooden coins were actually used in trade in America in certain limited circumstances on a local level. A contemporary equivalent could be "don't take any steel pennies." The United States House Of Representatives has already passed a bill, HR 5512, authorizing the Treasury Department to substitute steel for the nickel and copper now used in American pennies and nickels.

The rationale is that, by substituting cheaper metals, the government can save many millions of dollars. This is, in fact, a very valid point. Another observation is equally obvious and valid. The dollar has been devalued to such an extent that a penny — as in one hundredth of a dollar — can only buy a fraction of the metal needed to make a physical penny. Each coin takes significantly more than one cent to produce.

This is not the first time in history that the currency of a country has been debased. In centuries past, kings would debase gold and silver coins by reducing metal content, making smaller coins and actually replacing the original metals with cheaper alloys, while holding the legal-tender value the same. This gave rise to Gresham's Law, a principle in economics that bad money drives out good money. Consumers will use the devalued currency in transactions and take the more valuable money out of circulation. Since the establishment of the Federal Reserve, American coins have been debased numerous times, replacing more valuable metals with less valuable ones. The dollar, which was backed by gold decades ago, is now backed by nothing but legal-tender laws.

Fuel prices are very high right now. Because of that, people adjust their lives to accommodate them. This adjustment results in a lower quantity demanded for many goods and services that rely on travel and energy consumption. The lower quantity demanded should also lead to lower prices of nonenergy items. With a constant supply of money, an increase in prices in one area necessarily has to result in a decrease in prices in other areas. The only way that prices of all things can increase at the same time is if the relative supply of money increases; more dollars chasing after the same amount of goods and services.

Congressional leaders give the appearance of being interested in saving taxpayers money, which would be a very good thing if only it were true. In theory, the less they spend making coins, the less they would have to tax the people. What they don't reveal is that inflation, which gives rise to the need for devaluing the coins, is in effect a tax. It takes wealth from your pocket and transfers it to the pockets of bankers and government agents who get the money first. The inflation tax is just as much a burden on the population as a direct tax. It is more insidious, however, because it is not seen as a tax. It has become such a normal occurrence that people just factor it into their daily business. People are told that rising prices cause inflation to divert the heat from our elected officials. In reality, it is just the opposite. The rising prices are the effect. The increasing money supply is the cause.

There was another time in the past when pennies were made of steel. I have a steel penny from the World War II era. At that time, copper was in short supply due to military consumption during the war. Copper was expensive because it was scarce. Today it is not scarce. Copper and nickel have a high dollar price because the dollar is rapidly losing its value. With the current inflationary scheme for financing government, there will come a time when even steel will cost too much to use in coins. We may be forced to accept wooden nickels because every metal will be priced out of the market for coinage.