Why I Expect Serious Stagflation 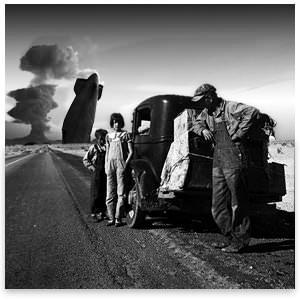 When doing interviews for my new book on the Great Depression, a natural question comes up: will the present crisis turn out as bad as the 1930s?

My standard answer is typical for an economist: "yes and no." On the one hand, there were very specific reasons that unemployment broke 25 percent in 1933, and we don't have those factors in place today. So I don't think the official unemployment rate will get anywhere near that catastrophic level, though it could very well come in at the #2 spot in US economic history.

However, even though unemployment rates will not be as severe, I still predict that we are in store for a miserable decade of economic stagnation. Given all of the huge assaults of the federal government into the private sector in just the past six months, I frankly don't understand how anyone except true believers in Karl Marx can be seeing "green shoots."

What is perhaps worse, laid on top of the stalled output in goods and services, I predict Americans are in store for the worst price inflation in US history. Just as stagflation referred to the combination of high unemployment and price inflation rates in the 1970s — something Keynesians thought was impossible — we can use the term hyperdepression to refer to the mix of hyperinflation and a serious recession in real output. In the remainder of this article I'll explain my pessimistic outlook.

The single biggest blunder Herbert Hoover made was insisting that businesses maintain wage rates after the stock-market crash in October 1929. Hoover adhered to an "underconsumptionist" theory of the business cycle, in which a small shock to business could end up cascading into a full-blown depression if market forces were left to their own devices. In Hoover's view, the worst thing businesses could do in 1930 would be to slash wage rates, because then workers would have even less money to buy products; there would be a downward spiral into oblivion.

The problem was that the United States was still on a gold standard, and so the Fed couldn't inflate the economy with new paper money with reckless abandon (the way it has done in subsequent recessions). When Americans began panicking and pulling their money out of the banks, the overall quantity of money (measured by aggregates such as M1 or M2) fell sharply, declining by about a third from 1929 to 1933.

Because of the shrinking money stock as well as people's desire to hold larger cash balances, prices in general fell substantially as well, falling at an annualized rate of more than 10 percent for portions of the Hoover years.

This is why Hoover's high-wage policy proved so disastrous. With everything except labor getting cheaper by the month, unemployed workers found it difficult to re-enter the work force. With sales and revenues plummeting, no employer wanted to hire workers at the same wage rate prevailing at the height of the boom in 1929. Because Hoover insisted that wage rates stay the same, even though the market-clearing wage rate was falling with productivity and general prices, the result was larger and larger unemployment. This is Econ 101.

In our present crisis, we don't need to worry about unemployment rates hitting 25 percent. Even though federal policies will reduce labor productivity, and even though Obama's pro-union policies will exacerbate "wage stickiness," over the next few years I predict large price inflation that will tend to mitigate these factors. In short, most workers will still be able to find jobs, because Bernanke's running of the printing press will ensure that their paychecks don't buy very much at the stores. Consequently, it won't be as difficult for employers to justify taking on people laid off from other firms, compared to the situation in the Hoover years.

Why Real GDP Will Stagnate

I am not going to be foolish and give annual rates of projected real GDP growth; let me simply summarize my view by saying that the economy will be in the toilet for a decade. (Consult another economics PhD for a precise translation of those terms.)

I really don't understand how even some free-market analysts on CNBC and the like can talk about the recession ending this year, or who speculate that we've finally "hit rock bottom." If they really believe that, then I wonder why they spend so much of their careers praising free markets and blasting socialism? If all of Bush's and now Obama's enormous interventions only yield a few quarters of a moderately bad recession, then what's all the fuss about?

We have all been desensitized to the federal power grabs, because they have been so sudden and so sweeping. The human mind is able to adapt to any new environment fairly quickly.

Let's think back just one year ago. Remember when plenty of people were worried about the "unjustified" intrusion of the Federal Reserve into the Bear Stearns takeover? Contrast that to today, when the federal government is literally acquiring outright, common-stock ownership in major banks, where the precise accounting mechanism is a conversion of (TARP) "loans" that it forced some of these banks to take, and which the government (as of this writing) refuses to allow to be paid back.

Or how about this one: in the spring of 2008, the Bush administration pushed through a stimulus tax cut that cost a little more than $150 billion. Do you remember that at the time, this was considered a fantastic sum of money? Analysts on CNBC fretted about the impact on the deficit and interest rates.

Well President Obama's stimulus package was $787 billion; the expected federal deficit this fiscal year is $1.8 trillion. The CBO projects that the federal debt as a share of the economy will double over the next decade, from about 41% last year to 82% by 2019.

Beyond the massive shift of resources to the government, though, are the massive intrusions of federal power into various sectors. The feds have already partially nationalized the banking sector (a process started under that "laissez-faire conservative" George Bush); they have taken over one of the biggest insurers in the world (AIG) and two of the Big Three car companies; and they have taken over Fannie and Freddie and now control more than half of US mortgages.

On top of that, they are pushing through a plan to cap carbon-dioxide emissions — which allows the government to control energy markets, and — oh why not? — they are trying to nationalize health care too. Just to make sure investors around the world stay clear of the American economy, the Obama administration has overturned secured-creditor rights in the Chrysler fiasco and has hired 800 new IRS employees to put the screws to wealthy filers with international business operations.

It is no exaggeration to say that the last time the government expanded this much, this quickly, was under FDR's New Deal. And we got a decade of misery during that particular experiment. Why would things be different this time?

As if all of the above weren't bleak enough, on top of that we have the very real possibility that the dollar will crash. Central bankers have openly discussed switching away from the dollar and into a "basket" of currencies; this talk would have been unheard of even 18 months ago.

It's true there are deflationary forces at work, but I believe Bernanke has overcome them and will continue to do so. First of all, look again at what he has done to the "monetary base," which basically captures how much in reserves Bernanke has pumped into the banking system:

I know, I know, there are all sorts of clever arguments economists can give, to explain why there's "nothing to see here, folks." But if and when the dollar collapses and we see 20+ percent price inflation, I think people will look back at the above chart and wonder, "How in the heck did we manage to convince ourselves to worry about deflation?"

For what it's worth, the monetary aggregate M1 (very liquid assets such as cash and checking deposits) rose by 17 percent during 2008. Remember, during the Hoover years the Fed was unable to prevent M1 from falling at a steep clip. We need to keep these differences in mind before drawing any conclusions about what happens to prices "during a depression."

One last point about deflation/inflation: If you have been reading CNBC headlines and listening to Ben Bernanke, you would get the impression that we are still experiencing "deflationary pressures" in 2009. But guess what? If you look at the non-seasonally-adjusted consumer price Index figures maintained by the BLS, you will see that from December 2008 to April 2009, prices have risen at an annualized rate of 4.3 percent. Yes, you heard right: if you throw out the "seasonal adjustments" and just look at the raw CPI figures, over the last four months the rate of price inflation is well above Bernanke's professed "comfort level."

I realize there is a temptation to give very gloomy forecasts, since that's the way to attract attention. You may think I'm succumbing to that here. But looking back over my arguments above, I don't see where emotion or sensationalism is creeping in.

Let me try one last thing to get my point across. Suppose in 2007 you were handed a piece of paper and a pencil, and were asked, "Come up with a list of bullet points for how to generate severe stagflation in the years 2010 through 2019."

Wouldn't your list look pretty similar to what has already happened?