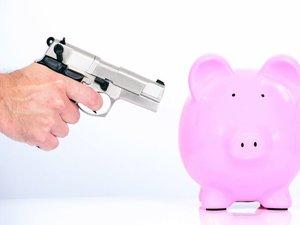 In April it was announced that Greece was imposing a surcharge for all cash withdrawals from bank accounts to deter citizens from clearing out their accounts. So now the Greeks will have to pay one euro per 1,000 euros that they withdraw, which is one-tenth of a percent. It doesn’t seem very big, but the principle at work is extremely big because what they’re in effect doing is breaking the exchange rate between a unit of bank deposits and a unit of currency.

PAVING THE WAY FOR NEGATIVE INTEREST

To make the calculations easier, and to illustrate the effect, let’s say that the Greek “surcharge” is ten dollars for every 100 dollars withdrawn. Now, instead of being able to convert one euro in your checking account into one euro in cash, on demand, you will only be able to buy one euro in cash by spending 1.10 euros in your bank accounts. That’s a negative 10-percent rate in some sense. That is to say that you can only take out one euro from the bank if you’re willing to pay 1.10 euros. So, you would only really get ninety cents for every dollar that you wanted to withdraw and that’s very significant because this means it will be more expensive to buy an item with cash than with bank deposits.

At the same time, the Greek government made it very clear that if you deposit the cash in the banks, you don’t get 1.10 euros of bank money for every euro you deposit.

So the system is now structured to lock the money in the banks. Now, what does that allow them to do? If you lose 10 percent every time you withdraw one euro in cash, they can lower the interest rate that you get on bank deposits to negative 5 percent, or negative 6 percent. You still wouldn’t withdraw your cash from the banks even if the interest rate went negative.

What we are witnessing is a war on cash in which governments make it either illegal or inconvenient to use cash. This, in turn, allows governments the ability to spy on and regulate financial transactions more completely, while also allowing governments more leeway in manipulating the money supply.

THE ORIGINS OF THE WAR ON CASH

It all started really with the Bank Secrecy Act of 1970, passed in the US, which requires financial institutions in the United States to assist US government agencies in detecting and preventing money laundering. That was the rationale. Specifically, the act requires financial institutions to keep records of cash payments and file reports of cash purchases or negotiable instruments of more than $10,000 as a daily aggregate amount. Of course, this is all sold as a way of tracking criminals.

THE PROBLEM IS INTERNATIONAL

The war on cash in Sweden has gone probably the furthest and Scandinavian governments in general are notable for their opposition to cash. In Swedish cities, tickets for public buses no longer can be purchased for cash; they must be purchased in advance by a cell phone or text message — in other words, via bank accounts.

The deputy governor of the Swedish Central Bank gloated, before his retirement a few years back, that cash will survive “like the crocodile,” even though it may be forced to see its habitat gradually cut back.

The analogy is apt since three of the four major Swedish banks combined have more than two-thirds of their offices no longer accepting or paying out cash. These three banks want to phase out the manual handling of cash at their offices at a very rapid pace and have been doing that since 2012.

In France, opponents of cash tried to pass a law in 2012 which would restrict the use of cash from a maximum of 3,000 euros per exchange to 1,000. The law failed, but then there was the attack on Charlie Hebdo and on a Jewish supermarket, so immediately the state used this as a reason for getting the 1,000 maximum limit. They got their maximum limit. Why? Well, proponents claim that these attacks were partially financed by cash.

The terrorists used cash to purchase some of the stuff they needed. No doubt, these murderers also wore shoes and clothing and used cell phones and cars during the planning and execution of their mayhem. Why not ban these things? A naked barefoot terrorist without communications is surely less effective than the fully clothed and equipped one.

Finally, Switzerland, formerly a great bastion of economic liberty and financial privacy, has succumbed under the bare-knuckle tactics of the US government. The Swiss government has banned all cash payments of more than 100,000 francs (about $106,000), including transactions involving watches, real estate, precious metals, and cars. This was done under the threat of blacklisting by the Organization of Economic Development, with the US no doubt pushing behind the scenes. Transactions above 100,000 francs will now have to be processed through the banking system. The reason is to prevent the catch-all crime, of course, of money laundering.

Chase Bank has also recently joined the war on cash. It’s the largest bank in the US, a subsidiary of JP Morgan Chase and Co., and according to Forbes, the world’s third largest public company. It also received $25 billion in bailout loans from the US Treasury. As of March, Chase began restricting the use of cash in selected markets. The new policy restricts borrowers from using cash to make payments on credit cards, mortgages, equity lines, and auto loans.

Chase even goes as far as to prohibit the storage of cash in its safe deposit boxes. In a letter to its customers, dated April 1, 2015, pertaining to its “updated safe deposit box lease agreement,” one of the high-lighted items reads, “You agree not to store any cash or coins other than those found to have a collectible value.” Whether or not this pertains to gold and silver coins with no collectible value is not explained, but of course it does. As one observer warned, “This policy is unusual, but since Chase is the nation’s largest bank, I wouldn’t be surprised if we start seeing more of this in this era of sensitivity about funding terrorists and other illegal causes.” So, get your money out of those safe deposit boxes, your currency and probably your gold and silver.

ONLY (SUPERVISED) SPENDING IS ALLOWED

Gregory Mankiw, a prominent macroeconomist, came up with a scheme in 2009: the Fed would announce that a year from the date of the announcement, it intended to pick a numeral from 0 to 9 out of a hat. All currency with a serial number ending in that numeral, would instantly lose status as legal tender, causing the expected return on holding currency to plummet to -10 percent. This would allow the Fed to reduce interest rates below zero for a year or even more because people would happily loan money for say, -2 percent or -4 percent because that would stop them from losing 10 percent.

Now the reason given by our rulers for suppressing cash is to keep society safe from terrorists, tax evaders, money launderers, drug cartels, and other villains real or imagined. The actual aim of the ﬂood of laws restricting or even prohibiting the use of cash is to force the public to make payments through the financial system. This enables governments to expand their ability to spy on and keep track of their citizens’ most private financial dealings, in order to milk their citizens of every last dollar of tax payments that they claim are due.

Other reasons for suppressing cash are (1) to prop up the unstable fractional reserve banking system, which is in a state of collapse all over the world, and (2) to give central banks the power to impose negative nominal interest rates. That is, to make you spend money by subtracting money from your bank account for every day you leave it in the bank account and don’t spend it.

Editor’s Note: This article was adapted from a talk delivered at the New York Area Mises Circle in Stamford, Connecticut.