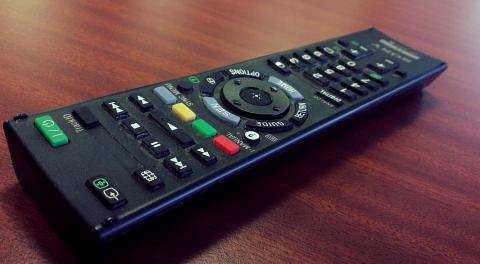 Have you wondered what those boxes with the letters in the corner of your favorite television program are? Do they serve a purpose or are they merely a distraction from your favorite show? The boxes are television ratings, another attempt of a paternalistic government to warn us about what we are watching.

In February 1996, Bill Clinton signed the Telecommunications Act into law. Claiming to be a deregulatory bill for the telecommunications industry, it imposes several costs upon consumer and producers alike.

The Telecommunications Act of 1996 imposes costs on consumers in two ways. First, it provides subsidies to spread the "information superhighway" to schools and libraries where it otherwise would not be profitable to provide this service. Second, this legislation requires that manufacturers of televisions include the new V-chip.

The V-chip is essentially the same chip that is currently in televisions to decode closed captions. The Federal government began requiring manufactures to include this technology after the passing of the Television Decoder Circuitry Act of 1990. The V-chip allows you to block material that you do not want to receive. This feature sounds harmless enough. However, rather than allowing consumers to choose whether they would want such a feature we all have to pay for it. The justification for this part of the 1996 legislation is to give parents more control over what their children watch. Instead of allowing parents to make these decisions, it creates the opportunity for parents to depend upon the government.

Upon the signing of the legislation, the federal government and FCC gave broadcasters the opportunity to "voluntarily" come up with a rating system for television shows by January 1997, or the FCC would design one for them. Broadcaster quickly and "voluntarily" devised a system that had to meet the approval of the FCC. Thus, in spite of the cooperation of the broadcasters (over the air and cable) the FCC has final say over these ratings.

The V-chip screens out material based upon the rating system determined by broadcasters who take their cue from the federal government. Presently, the design of the chip can block four levels in each of the following categories: sex, violence, and mature content; therefore, the chip can distinguish twelve levels. However, the rating system designed and approved by the FCC in January 1997 contained six ratings (TV-Y, TV-Y7, TV-G, TV-PG, TV-14, and TV-M). Broadcasters amended these six categories in the fall of 1997 to include letters to provide additional information to viewers.

Letters such as V-violence, S-sex, L-offensive language, D-dialogue (sexual) FV-fantasy or cartoon violence. That means that TV-G and TV-GFV are not the same. The amended system with ratings for age and content result in more combinations than the chip can decode. At a minimum, the existing rating system will require designers to alter the existing chip to decode these additional ratings. This altered chip or the addition chip creates higher prices for consumers.

The biggest political controversy over the V-chip has been the issue of first amendment rights regarding free speech. The ACLU already has court cases in progress that will serve only to waste taxpayer money. However, this point is a red herring. It is not a violation of freedom of speech to block a television signal from coming into your home. The V-chip allows you to program what broadcasts will be blocked. Broadcasters can still produce their shows in a manner they believe to be appropriate for their target audiences. It is not a violation of the first amendment if you choose not to watch their broadcast.

The greater concern is that parents are relying more on government to raise their children. It is easy for parents to rely on the government approved rating system as opposed to watching programs themselves and determining whether they are appropriate for their children. This technology lowers the cost of monitoring the programs your children watch by simply choosing to block all programs the networks deem inappropriate for children. Thus, parents are taking less responsibility for their children by trusting this rating system. Why shouldn't parents trust the rating system after all it was approved by the federal government, which only acts in the best interest of it citizens? The questions are what is acceptable, and who decides. Whose morality will be the guide?

The advocates of coercive enforcement of morality always assume their view of morality will be the one government enforces. What do the broadcasters view as appropriate? Many programs that receive a rating appropriate for young children today contain political correctness, multiculturalism, and anti-capitalist propaganda. In addition, public service announcements bombarded children telling them not to smoke, do not use drugs, fight racism, to volunteer, and to fight urban sprawl. All of these messages are Uncle Sam's means of teaching children right from wrong. I thought that was the job of the parent.

Parents already give up a great deal of responsibility in the age of big government. Public schools have children for six to eight hours a day. Government taxes families at such high rates that they force both parents to work outside the home allowing them less time with their children. Nowgovernment wants to come into your living room and tell you what shows you should let your children watch.

The V-chip is a technological marvel that in some ways is an anachronism. If parents decide a show is inappropriate for children then they should change the channel or turn the television off altogether. We know that parents cannot watch their children 24 hours a day, but the V-chip makes it easier for parents not to know what their children are watching by placing their trust in the government and broadcasters.

Murray Rothbard explains in detail in his work Power and Market how this kind of government protection is costly and inefficient. Restrictions on quality and safety by government are arbitrary, and do more to restrict innovation and competition than to provide services and protection to consumers. The free market through social cooperation fosters innovation and competition to provide safe and quality products to consumers.

With the all the recent reporting of violence in schools, which many parents and government officials claim is the result of violence on television, the rating system for television does not appear to be effective at deterring such violence. In addition, we will not know the full effectiveness of the V-chip for quite some time. After all, how many parents will feel the need to cast aside their existing television set because it does not have a V-chip? What about individuals without children who would not want this feature, but are being forced to pay for it anyway? In a free market, the V-chip would be an option like picture in picture and not a requirement by law.

This action is big government at its worst projecting its standards on us by coercing broadcasters and forcing consumers to buy this new technology. They are not giving us the choice of selecting the V-chip as an option on a new television. Manufacturers' will absorb some of the increase in cost causing profits to decline, and consumers will pay more fortelevisions. In addition, broadcasters have to invest in new equipment to transmit these ratings.

Of course parents need to take responsibility for their children including what they watch on television. If parents desire a V-chip then they should have that option, but the government should not force it upon all of us. One has to wonder why parents are willing to give up their freedom of choice for the convenience of not having to monitor their children as closely.

We must remember that government, no matter how hard it tries, cannot protect an individual from themselves. This legislation is simply one more attempt by big government to tell us that they know what is best for us. It is not the first time and it will not be the last. As Mises warns us "once the principle is admitted that it is the duty of the government to protect the individual against his own foolishness, no serious objection can be advanced against further encroachments" (Human Action p.728-29).

Peter T. Calcagno is Professor of Economics at the College of Charleston.