An Unsustainable Path of Debt Expansion

In Q2 2009, total debt outstanding in the United States — financial plus nonfinancial debt — amounted to 373.4% of GDP.[1] At the start of 1952, the debt-to-GDP ratio stood at only 130%. In fact, in the last decades the rise in total debt has increasingly outpaced nominal income — a development which gained momentum after the erosion of the last vestiges of the gold standard in the early 1970s.

Admittedly, we do not know how much debt relative to GDP an economy can shoulder. And, of course, there might even be good reasons for the ratio to rise over time. For instance, an increase in "financial intermediation" and a decline in the societal time preference(related, for instance, to rising confidence in the protection of property rights) might justify a higher level of loaning and borrowing in the economy.

One thing is clear, though: the level of debt relative to income cannot rise without limit.[3] This insight is important, given that there is strong reason to believe that the extraordinary rise in the debt-to-GDP ratio is a result of the government-controlled, fiat-money system in which the money supply is increased through bank lending.

Let us assume, for the sake of argument, that the current debt-to-GDP ratio has exceeded its sustainable level. What are the chances that output could start expanding more strongly than debt, thereby lowering the ratio? This would be a rather favorable scenario, as the debt-to-GDP ratio would decline, while income and employment would increase. Unfortunately, however, it is a rather unlikely correction scenario.

Austrian Economics teaches that a circulation-credit-fueled boom can only be sustained by ever-greater doses of credit and money expansion, provided at ever-lower interest rates. As soon as the growth rate of credit and the money supply slows down, the illusionary upswing collapses. Malinvestment is revealed, firms cut employment, and the economy goes into recession.

Lenders can then be expected to demand higher interest rates and/or to stop extending loans — as the outlook for the possibility of borrowers repaying their debt (in real terms) deteriorates. In other words, market forces start pressing for a change in the hitherto-observed path of the total-debt-to-GDP ratio.

If commercial banks make their debtors repay their loans, the money supply declines. A drop in the money supply, in turn, would represent deflation — and the symptoms would be declining prices for goods and services of current production, and for existing assets (such as, for instance, stocks and real estate).

Deflation would lead to credit losses as a growing number of borrowers would find their incomes greatly diminished and — most importantly — falling short of expectations. Many borrowers would default on their debt.

If credit-related losses exceed their equity base, banks go bankrupt. Savers and investors in bank debentures would have to accept losses, as banks could not meet their debt service. It doesn't take much to see that such an outlook could trigger a "flight out of debt."

Investors would try to dump their bonds, causing interest rates to go up. Borrowers in need of rolling over their debt would have to accept higher refinancing rates, which would leave a growing number of investment projects unprofitable. The mere expectation of rising credit costs would therefore make possible an anticorrection scenario.

In the anticorrection scenario, central banks — seeing an unraveling debt pyramid — would decide to prevent banks from defaulting on their debt by pushing short-term interest rates to record lows and providing additional base money for bank refinancing — by monetizing banks' debentures and/or (troubled) assets.

Keeping a circulation-credit boom going requires — as Austrian economists have explained in great detail — ever-greater amounts of credit and money, provided at ever-lower interest rates. However, credit and money cannot be increased indefinitely by the central bank and commercial banks. In fact, it is money demand that would set a limit.

The private sector may be able to cope with deflation (and the ensuing redistribution of property rights). The institution of government, in its current size and scope, however, cannot. Inflation — the rise in the money supply — is an indispensable tool for financing government outlays for which the taxpayer would presumably not want to pay out of his current income.

Inflation becomes one of the most important psychological aids to an economic policy which tries to camouflage its effects. In this sense, it may be described as a tool of antidemocratic policy. By deceiving public opinion, it permits a system of government to continue which would have no hope of receiving the approval of the people if conditions were frankly explained to them.[5]

The effort to prevent government from defaulting on its debt — and this goal would most likely be subscribed to by the ruled class as well as the ruling class, especially under deflation — is therefore the greatest danger for the value of money. And this is why an unsustainable debt-expansion path poses such a great danger to the exchange value of money.

Central banking makes it possible for the government to expand the money supply by any amount, at any time deemed necessary. And once (hyper)inflation is publicly seen as being the lesser evil of all options available for the government meeting its debt service, it cannot be dismissed out of hand that (hyper)inflation would be the consequence of an unsustainable debt-to-GDP ratio.

In 1923, Ludwig von Mises (1881–1973) published his essay, "Stabilization of the Monetary Unit – From the Viewpoint of Theory."[6] In it, he not only outlined the consequences if the government continues to increase the money supply, he also outlined a monetary reform plan. In view of today's challenges regarding worldwide monetary affairs, Mises's essay is as insightful and instructive today as it was back then. 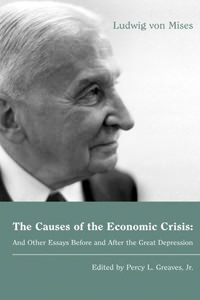 [1] In this article, I focus on total debt outstanding, which includes the holders and issuers of debt, namely the financial sector.

[3] It should be noted here that in the free market, the real interest rate, which is determined by peoples' time-preference rate, cannot go to zero (let alone become negative).

[6] It should be noted that Mises finalized his essay in January 1923 — that is, before the Reichsmark had collapsed under hyperinflation, which occurred in November 1923.