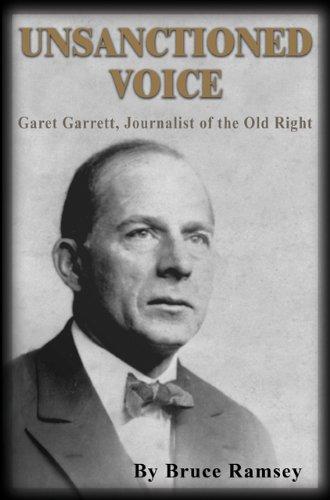 What a fascinating life Garet Garrett lived! Journalist, novelist, anti-New Deal writer, and then prophet of decline in the 1950s, no one's prose and thought combined to create such a rich combination of toughness and insight. He was a great champion of liberty, and fabulous stylist. He warned of the 1929 crash, explained the depression, and no one better captured the essence of the FDR revolution than this one man in his great monograph People's Pottage.

Unsanctioned Voice is the first biography of this amazing writer. Bruce Ramsey explores Garrett’s life and work as reflected in his novels and pamphlets and in dozens of essays in the Saturday Evening Post, the New York Times and other publications. He covers his humble background, his frenzied early career, his near-death in a speakeasy shootout, his lone and courageous fight against the New Deal, his interesting correspondence and travels with Rose Wilder Lane, and more.

Bruce Ramsey is a journalist in Seattle and editor of Salvos Against the New Deal, Defend America First, and Insatiable Government.

Bruce Ramsey is a journalist in Seattle and editor of Salvos Against the New...

Unsanctioned Voice is the story of a writer who found himself on the losing side of a national debate about the...

The Capitalist Fiction of Garet Garrett

These four novels are of definite ideological interest to libertarians