Unions and the Other Tiny Tim 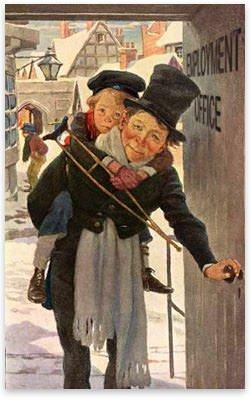 04/12/2012Christopher Westley
Walking home from work the other day, I passed a car parked in front of the English department that I used to chuckle at. It is a grayish sedan with a greenish bumper sticker saying we should thank union labor for the 40-hour work week.

My chuckling would be at that car's owner, who is known as a smart guy on the English faculty and someone who "gets it" in terms of the broad social and political movements of the day relative to Average Joe, but who nonetheless engages in one of Average Joe's favorite pastimes — that is, advertising uninformed economic opinions — by putting that bumper sticker on his car.

Those English profs. Many think they are underpaid because they adhere to the labor theory of value when it comes to their own wages. Many read Upton Sinclair and assume that unions forced quality standards in production. They read Charles Dickens and assume the union movement he spawned rescued western workers from unspeakable horror, even though child labor was not legally abolished in the United States until almost 100 years following the publication of Oliver Twist. Had the Bob Cratchits of Victorian-era England had access to a United Clerk Workers Union, not only could Scroogie management practices be confronted but the Tiny Tims of the world would sleep more soundly.

As Mises opined several times, absent theory, one can assume anything. This applies equally to Dickens when he wrote novels or to my colleagues when they affix bumper stickers to their cars.

I confess: As an undergraduate interested in economics, I used to hold such professors with a contempt that often became mutual by the semester's end. There I was in those dreary classes, a part of a captive audience, being forced to listen to state-funded lectures on socialism, while my fellow students — the progeny of Average Joe — lapped it all up.

Experiences like that were among the many that led me to study economics. At least the econ profs seemed to have a sense of humor, and while a few brought normative agendas into their classrooms (which were less captive, as these instructors understood marginal benefit and cost decisions regarding skipping class), they all nonetheless had a reverence for both theory and real-world data to buttress their opinions. Needless to say, there wasn't much pro-union sentiment in the economics department. Maintaining such sentiment would require ignoring too much theory and evidence of the Dickensian effects of union labor on society as a whole.

Two Effects of the Union Wage

The theory is straightforward. When you increase the price of an input to the production process, there are two important effects. The first is that, all other things equal, the minimum price required by the producer to sell his output on the market rises. At this price, the producer expects to earn enough revenue to cover the costs of the factors of production, and to the extent that unions increase the price of labor they place an upward pressure on output prices.

Furthermore, if the industry is competitive and the producer is unable to raise his price without losing market share, then the union forces the producer to cut back in other areas. Perhaps he must reduce profits that would otherwise go to the firm's shareholders. Perhaps he decides to cut back on higher quality inputs for lower quality but less expensive ones. Perhaps he reduces the size of the goods sold on the market.

Whatever. The one thing he can't do is raise union wages and benefits without a corresponding adjustment elsewhere. Often, these adjustments include sectors of the economy that now receive lower payments for their contribution to output and consumers who now receive cheaper goods. Think about this the next time you see someone tooling around in a Smart Car — which, not surprisingly, first became popular in the more union-friendly Europe.

These are not accounting costs. They are mostly unseen effects of successful union activity.

The second effect is that the higher price received by union labor inevitably attracts substitutes. This is the law of supply — which states that there is a positive relationship between prices and quantities supplied — at work. At the higher union wage, many workers make their labor available on the market, whether or not they are accepted in the union. On its own, this effect increases the size of the labor force — especially the unemployed portion. This higher price also increases incentives to producers to adopt capital-intensive production at a higher rate than they would absent the union, promoting, at least in the short-term, structural unemployment.

Given these two effects, there's little wonder that the states with successful unions in the 20th century are the ones that are economically stagnant today, reflecting decades of bleeding capital and labor to other states where they are less expensive. All the union organizing has turned into a long-term benefit for right-to-work states. If that fact alone doesn't make union labor notorious, then unions' status as the only institution in society outside of the government with the legal right to inflict violence on others surely does. The term of endearment "union thug" is well earned.

Unions are less socially disruptive when union pay is tied to worker productivity. For instance, Southwest Airlines' pilots are unionized, but Southwest requires higher levels of flight time compared to less-well-run, and less-competitive, airlines. Southwest's pilot-productivity clauses tie its labor cost to productivity, so that if the firm hires an additional pilot and pays him a union wage equivalent to pilot wages at other airlines, the marginal revenues that result from that pilot's productivity justify the wage. This outcome contrasts with other airlines in which pilot wages exceed their contribution to revenues. Such airlines actually lose money by hiring their pilots and are forced to economize on other inputs.

Figures computed in March 2012 by the author using data from Airline Pilot Central. The hourly wage applies to captains with 12-years tenure flying Boeing 737s, except for airlines indicated by an asterisk (*), in which Airbus A320s apply.

Most recently, this economizing has taken the form of the bankrupt American Airlines' campaign to dump its defined-benefit pension obligations on the American taxpayer. Although the airline's attempt has been thwarted (for now), you can't blame it for trying. United Airlines successfully pulled off this scheme in bankruptcy seven years ago and is better off today because of it. Absent cost pressures brought by unions, would airlines be less likely to attempt to socialize their pensions?

This is not a question for my English-professor friend who sees shorter work weeks correlating with union labor and, absent a theoretical justification, urges gratitude for the union movement. Makes for a good bumper sticker, I guess, even if it ignores the possibility that the growth of capitalism over decades actually made child labor superfluous. Perhaps his own family survived on union wages when he was growing up and he has never been exposed to the struggles of other families that found themselves on the short side of organized labor's negative-sum gain.

But he should know that violent interventions in the market process always and everywhere result in negative consequences, and this applies whether the government favors investment bankers in Manhattan or rubber workers in Akron. If only Dickens had written about a Tiny Tim whose father remained unemployed due to artificial barriers to his entry into the labor market.