GET NEWS AND ARTICLES IN YOUR INBOXPrint
A
A
Home | Mises Library | Uncle Sam: Busted

On Monday, Standard and Poor's (S&P) announced that although the US government would retain its AAA debt rating, the outlook for the United States' future was being downgraded from "stable" to "negative." The move is a welcome if tepid acknowledgement of the fiscal train wreck of which Austrians have been warning for years.

Standard & Poor's on Monday downgraded the outlook for the United States to negative, saying it believes there's a risk U.S. policymakers may not reach agreement on how to address the country's long-term fiscal pressures.

"Because the U.S. has, relative to its 'AAA' peers, what we consider to be very large budget deficits and rising government indebtedness and the path to addressing these is not clear to us, we have revised our outlook on the long-term rating to negative from stable," the agency said in a statement.

In an interview with CNBC, David Beers, S&P's global head of sovereign ratings, said the agency has been "struck increasingly by the difference in how other governments are dealing with fiscal consolidation."

"The U.S. to us looks to be an increasing outlier in that context," Beers added.

The White House tried to spin the news as an endorsement of the budget talks and of the fiscal approach laid out in President Obama's recent speech. But even the allegedly "radical" Paul Ryan plan is grossly inadequate to grappling with the looming fiscal crisis.

For once, I agree with Paul Krugman: the Paul Ryan budget plan doesn't deserve the adjective "serious," no matter how many pundits christen it as such. The politically painful budget slashing is deferred to the future. As Lew Rockwell has said of any would-be budget hawks, tell me how much you want to cut spending this year — not ten years from now when someone else will be in office. (On that score, Rand Paul's proposal is far more serious than Paul Ryan's).

Despite all the talk of how "savage" the Ryan budget cuts are (when described by critics) or how it "puts the country on the path to fiscal sanity" (when described by friends), in reality the plan does neither. Yes, the Ryan proposal is certainly better than the long-term budget plan put out by the Obama White House, but that's like saying Darth Vader is a pretty nice guy compared to the Emperor.

I don't need to scour left-wing blogs to demonstrate just how moderate the Ryan plan is. We can reproduce a chart and crucial line from the Ryan plan itself: 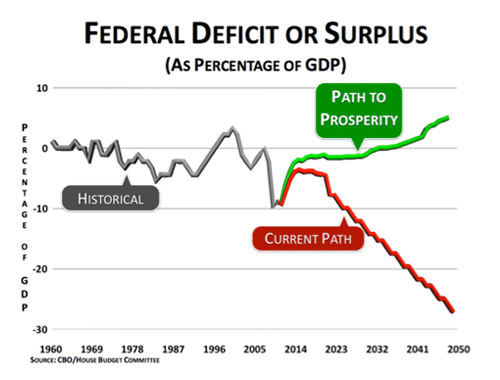 Commenting on the above figure, the Ryan proposal says:

According to the Congressional Budget Office, this budget charts a path to complete balance. By 2040, the CBO estimates that this budget will produce annual surpluses and begin paying down the national debt. (p. 57, see PDF)

To be clear: The Ryan plan — even using its own numbers — has the federal government running a fiscal deficit this year, next year, the next year, and so on, until about 2038. So under the Ryan plan's own rosy forecast, the federal budget won't actually be balanced for almost three decades. Does that strike most readers as "savage" budget cutting that recognizes the fiscal emergency upon us?

For another demonstration of the halfhearted urgency of the Ryan plan, consider Table S-1 (p. 62) from the appendix:

When evaluating the above numbers, keep in mind that the scenario modeled in these projections does not assume that, say, the world dumps the dollar five years from now and interest rates spike. Yet even absent such bumps in the road, the Ryan plan nonetheless calls for adding $5.1 trillion to the federal debt held by the public over the next ten years — an increase of 45 percent from the assumed starting level in the fiscal year 2012. You don't hear too many fans of Ryan couching it in these terms.

The Cash-Flow Deficit Isn't Even the Main Problem

By focusing on the projected cash-flow deficits and accumulation of explicit Treasury debt held by the public, we actually play into the government's smoke and mirrors. The real fiscal crisis is due to the demographic shifts that will make the current configuration of Social Security and Medicare simply untenable.

In contrast to the current outstanding Treasury debt (held by the public and government agencies) of some $14 trillion, the government's own actuaries estimated that as of January 2009, over a 75-year horizon, the various Medicare and OASDI programs were unfunded in present-value terms by about $46 trillion.1

Unfortunately, this estimate is probably far too optimistic; credible analysts have placed it higher than $100 trillion. And now we see why the Ryan plan — which only balances the cash flow deficit by the late 2030s — is hardly adequate. Tom Woods explains in his latest book, Rollback:

[The cash flow deficits,] staggering as they are, do not reflect the impending problem posed by the unfunded liabilities of Social Security and Medicare. Even if the federal budget were balanced [immediately] and the deficit reduced from over $1 trillion to zero, when we factor in the unfunded liabilities problem, the U.S. government would still fall further into the hole by $2 trillion to $4 trillion a year (p. 6).

Now it's true that the Ryan plan purports2 to rein in escalating Medicare expenditures, but the pattern is the same: the difficult choices only affect future politicians. The Republicans are not daring to tell voting seniors that their benefits will be cut today. As the quotation from Woods underscores, we can't wait another decade before really "getting serious" about the problem.

S&P's downgraded outlook for US debt is one of many objective signs that those of us warning of a fiscal crisis aren't crazy. The federal government is digging itself deeper and deeper into debt at an alarming rate. Although the budget proposal put forth by Paul Ryan is better than that of President Obama, it is nowhere near a solution.