GET NEWS AND ARTICLES IN YOUR INBOXPrint
A
A
Home | Mises Library | Uncivil War: Detroit Blames the South 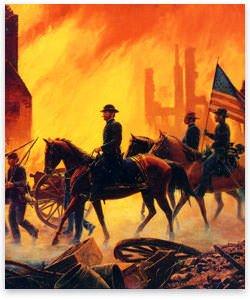 "Some of the old guard still hold on to pipe dreams of an all-conquering Union."

The Union is squaring off against the South again. This time it's Detroit's union — the UAW — partnering with the auto manufacturers, politicians, and media supporters of the domestic auto industry to wage warfare against the entire South.

The problem here centers on certain southern states — Mississippi, Louisiana, Georgia and, in particular, Alabama — where certain bone-headed senators seem to have forgotten that the Civil War ended, with the appropriate outcome, almost 150 years ago.

What's more, these Alabama representatives argued that they and other southern states had plenty of automotive manufacturing capacity to take up the slack and keep the country's economy going if Detroit was to go belly up. Specifically, Alabama's Republican senator Richard Shelby called Detroit a 'dinosaur' and said bankruptcy was a better solution to the problems facing U.S. carmakers. The state's other senator, Jeff Sessions, also a Republican, said Detroit's collapse would "not be the end of the world. We have a very large and vibrant automobile sector in Alabama."[1]

Detroiters continue to embarrass themselves by placing the auto industry collapse into an us-versus-them framework. In the midst of all the whining and begging for a bailout, the South has been declared the new enemy, along with the foreign-car manufacturers who are producing cars — in Southern plants — that consumers want to buy. The army of politicians and opinion columnists in Michigan who lay the groundwork for resuscitating this fading industry don't bother to acknowledge that it is in the best interests of any public company to maximize quality for its customers and efficiency of production and profits for its shareholders.

Instead, Toyota and Honda are pegged as evil because they are thriving. They are especially evil for building plants that aren't located near Detroit. However, it is important to remember that foreign auto manufacturers are able to build plants where they want to build them, according to what fits best into their strategic plans and potential for profit. The US automakers have UAW officials making those decisions for them for the sole purpose of enriching the union's overpaid officers and dues-paying members.

Moreover, the whole South is considered evil for luring foreign plants into the region. Sure, the massive subsidies granted to foreign automakers to lure them to the South are the quintessence of corporate welfare. But no country, no state, no region, is immune to such politics. Michigan does the same to lure high-tech companies to the state, and most recently, it offered huge incentives to Volkswagen to build a new plant in the state. The game is played the same everywhere.

The free-market method would be to allow for a business environment that would be ideal for businesses to thrive (no taxes or stifling regulations); thereby encouraging companies to relocate to low-cost states on a mutually cooperative basis. This would engender competition among states that would drive down all costs everywhere. But that would mean that the people in power — the politicians and government planners — would become less influential and less wealthy; it is for that reason the free market has not prevailed.

Additionally, Southern members of Congress are seen as evil because they refuse to vote "yea" on a bailouts for debt-laden, deadbeat companies in the North. Immediately following the failed bailout vote, Michigan Congressman John Dingell accused Southern senators of "unpatriotically blocking a bill that was supported by the White House, that passed the House with a bipartisan majority, and that had the support of 52 Senators." Michigan Governor Jennifer Granholm referred to the lack of support for the bailout as "un-American."

Along the way, the Detroit, pro-bailout contingent is frantically seeking outside parties to come to its aid — assorted journalists, neocons, politicians, and ideologically compatible sympathizers who all wish to preserve and fortify the Yankee mercantile system.

Perhaps the most preposterous line of attack I've seen from one of the non-Detroit proponents is the tripe produced by Michael Lind in Salon, who is still fighting the War Between the States. He stated, "The South will have risen by bringing down the North. Jefferson Davis will have had his revenge." Lind refers to a "Southern economic strategy" as he charges the South with "poaching" key industries from New England and the Midwest in the early 20th century because it played dirty with less regulation and public spending.

"It is in the best interests of any public company to maximize quality for its customers and efficiency of production and profits for its shareholders."

He goes on to declare that "the neo-confederates" are aligning with the economic axis — Germany and Japan — to defeat a common enemy, the Northern union (as in UAW). Lind is distraught because Reconstruction of the South was never completed and thus he calls for a Third Reconstruction (the New Deal-Civil Rights era being the Second Reconstruction) that could be carried out by engaging the majority Northern congressional contingent, along with the executive branch, to use "the power of the federal government to put a stop to the Southern conservative race-to-the-bottom strategy once and for all."

Then the Feds could foist Yankee traditions onto those poor, backwards Southerners who just don't know any better. The new Reconstruction would be consummated by turning out national minimum-wage laws ($12 per hour), more safety regulations, more environmental regulations, and higher taxes. So the brilliant plan goes like this: if the Detroit model doesn't work in Detroit, extend it everywhere else by the force of majority power and government fiat. Doing so, he says, will finally fix the broken South, making it a more suitable place. Poor Michael Lind believes he is still trying to free slaves from the ghosts of Southern plantation masters.

The failure of Congress to bail out Detroit's failed automakers has been identified as the cause for Detroit's flop. In fact, hyperbole-laden journalists keep saying, "Detroit is collapsing." But Detroit is not collapsing. Three auto manufacturers born of Detroit are no longer financially able to continue operations. They are financially failed because they long ago sold their souls to union brutes who have run their businesses in the best interests of the UAW's overpaid executives and managers, and their spoiled autoworker constituency. They have become insolvent because of the parasite effect: too many years of a top-heavy, management scheme sucking the blood from each company's long-term potential. They have ceased to sell cars because they have, for decades, been turning out scores of dreadful cars — with serious design flaws and quality concerns — that don't last as long as the car payments. And finally, American automakers have never saved for the rainy days ahead. All of their balance sheets reflect an attitude of "live for the day," and indeed they did.

Ford, Chrysler, and GM all went hog wild during the boom years — they reaped gorgeous profits from consumers loaded with the credit bubble's cheap cash and too much debt. The Big Three's financing arms became inordinately profitable while their profits from operations dropped and dropped — and then stopped altogether. Still, not once did executive management look forward, beyond the peculiarity of the boom, and prepare for the business environment and consumer demands of tomorrow. Instead, all three companies continued to put all of their resources into the short-term channel to secure today's profits at the expense of tomorrow's stability and survival.

Boom times and credit bubbles (and recent bailouts) have masked dead business models, considerable quality issues, and insolvency. Now that the veneer of phony prosperity has been stripped off the economy, the naked auto companies are a frightening sight to behold. And since Detroit came to rely so heavily on one industry, and put all of its eggs in that one basket, the region's economy is starting to crumble.

In response, Detroit automakers and unions seek to use aggressive tactics against others to remain intact. The automakers sought, and received, the theft and redistribution of other peoples' money in order to sustain their failed businesses. The UAW seeks to use legislative fiat to direct the terms of the bailout and extend their power by planting their gangs in the South. Some of the old guard still hold on to pipe dreams of an all-conquering Union. As one union president said (apparently, a guy who never got past the intro to macro and micro in high school),

What the economy needs now is rising wages so the country can get on the path of wage-driven consumption growth. That means stronger unions. Indeed, I believe eventually it will mean the unionization of the entire U.S. auto industry.

However, in the South the market has spoken in at least one respect — the unions are not welcome by the workers.

Getting back to John McCormick's limp line of reasoning, he ends his column by implying that Michiganders should boycott Alabama — especially the retirees and warm-weather family vacationers. As always, the little guys are told to give up their way of life to preserve the high-paying jobs of corporate and union executives — along with the jobs of people who make cars no one wants to buy. But what's in it for them? National pride?

Perhaps Detroit should just send a battalion down to Atlanta to rough things up a little. A new Civil War anyone?

Karen De Coster is a CPA and has an MA in economics. Born in Detroit into an autoworker family, she writes from halfway between Detroit and Minneapolis. See her website and blog at www.karendecoster.com. Send her mail. Comment on the blog.

[1] John McCormick, "Maybe it's time to turn the tables on the South."