The Ultimate Foundation of Economic Science 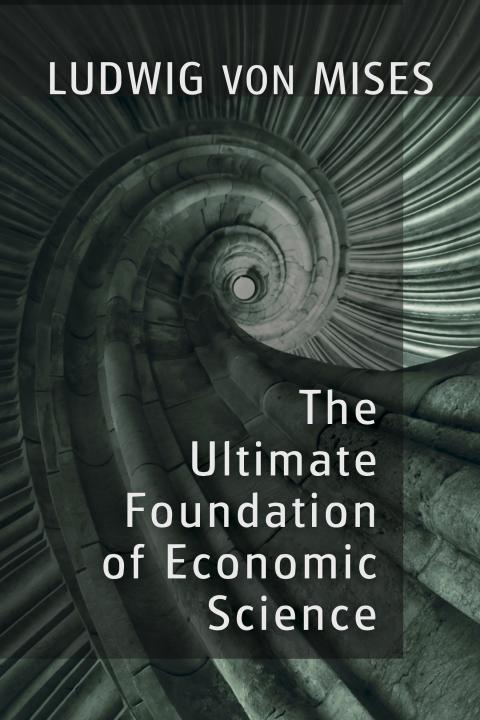 If Mises has an unheralded masterpiece, The Ultimate Foundation of Economic Science is it. There are two senses in which this book is indeed ultimate: it deals with the very core of economics as a science, and it is the last book that he wrote.

If you have never read this book, you will be struck by the fiery and determined prose and the weightiness of the subject matter. The content reflects a lifetime of learning and his desire to make one last impassioned statement to save both economics and liberty from sure destruction at the hands of intellectual error.

As his career was coming to a close, Mises saw that that fiercest battles over economic questions come down to issues of epistemology: how do we determine what is and what is not true in economics? How do we even know that economics is a valid science? What are the methods we should use in studying economics? What constitutes a true proposition and how do we know?

These questions matter because, as Mises says, the very future of freedom and civilization itself depend on economic science, the development and application of which was "the most spectacular event of modern history."

Between Mises's earliest writings on this subject and this book, two movements had taken hold: "scientific" planning in public policy, and positivism in the social sciences. Mises here battles both, first by showing how the two are related, and, second, by demolishing the basis of both. He shows that humans cannot be studied in the same way that we study the physical world. We are dealing with volitional beings whose choices make controlled experiments completely impossible.

And yet does that imply that a kind of chaos exists in economic theory, that we must throw up our hands and do nothing observe that all is in flux? Not at all, says Mises. There is a logical structure of the human mind that manifests itself in economic reality through strict laws of cause and effect. To understand economics is to see these laws as universal and inviolable.

To provide a flavor, here is Mises on the existence of causality:

No thinking and no acting would be possible to man if the universe were chaotic, i.e., if there were no regularity whatever in the succession and concatenation of events. In such a world of unlimited contingency nothing could be perceived but ceaseless kaleidoscopic change. There would be no possibility for man to expect anything. All experience would be merely historical, the record of what has happened in the past. No inference from past events to what might happen in the future would be permissible. Therefore man could not act. He could at best be a passive spectator and would not be able to make any arrangements for the future, be it only for the future of the impending instant. The first and basic achievement of thinking is the awareness of constant relations among the external phenomena that affect our senses. A bundle of events that are regularly related in a definite way to other events is called a specific thing and as such distinguished from other specific things…. Whatever philosophers may say about causality, the fact remains that no action could be performed by men not guided by it. Neither can we imagine a mind not aware of the nexus of cause and effect. In this sense we may speak of causality as a category or an a priori of thinking and acting.

This proposition cuts through the nonsense of Marxism (which postulated without evidence the existence of historical laws), Keynesianism (the economic laws of which were arbitrary), and positivism (which erred in importing methods from an unrelated field of study). That only scratches the surface of the extent of the ideologies confronted here. He also confronts those who claim the existence of "statistical laws," the advocates of primitivism, the apostles of polylogism, and pushers of panphysicalism, and the demogogues of determinism. Above all, he elevates the Misesian idea of praxeology—the science of action—as the starting point for all economic theory and historical understanding.

Of all the books in the Misesian library, this book is probably the most neglected. And unjustly so. He wrote it as a final defense of his theoretical work, and the reader is struck by the extent to which Mises complete that intellectual revolution that began in Austrian in the 1870s, when Carl Menger rediscovered the foundation of economic science in the understanding of acting, choosing human beings.

Mises ends his book with a conclusion that doesn't at all seem far-fetched after his blistering and impassioned examination of the subject at hand:

The outstanding fact about the contemporary ideological situation is that the most popular political doctrines aim at totalitarianism, the thorough abolition of the individual's freedom to choose and to act. No less remarkable is the fact that the most bigoted advocates of such a system of conformity call themselves scientists, logicians, and philosophers.