The Truth About Economic Forecasting 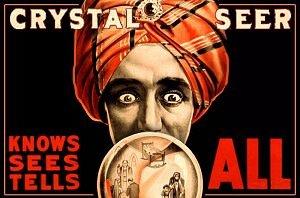 Astrologers, palmists, and crystal-ball gazers are scorned while professional economists are heralded for their scientific achievements. Yet the academics are no less mystical in trying to predict the direction of interest rates, economic growth, and the stock market.

Forty years ago, Thomas Dewey was defeated by Harry Truman, stunning the political experts and journalists who were certain Dewey was going to win. While questions about “scientific” polling techniques naturally arose, one journalist focused on the heart of the matter. In his November 22, 1948, column in Newsweek, Henry Hazlitt said the “upset” reflected the pitfalls of forecasting man’s future. As Hazlitt explained:

The economic future, like the political future, will be determined by future human behavior and decisions. That is why it is uncertain. And in spite of the enormous and constantly growing literature on business cycles, business forecasting will never, any more than opinion polls, become an exact science.

We know how well economists forecasted the eighties: from the 1982 recession and the employment boom to the Crash of 1987, no major forecasting firm came close to predicting these turns in the market. And following the Crash, virtually every professional forecaster revised his economic forecasts downward, all because the historical data suggested that the stock market was a reliable barometer of future economic activity. The economy then continued to expand and the stock market eventually reached new highs.

After President Eisenhower’s heart attack on September 24, 1955, the stock market experienced a massive drop. The stock market later recovered as the president recovered; like 1987, 1955 turned out to be one of the statistically best in economic history.

Despite the sorrowful record, most economists remain die-hard advocates of forecasting. Most have spent years in college and graduate school learning the tools of their trade, and can’t bring themselves to admit their own entrepreneurial errors. As one investment advisor put it: “No matter how many times they fail, their self-assurance never weakens. Their greatest (or only) talent is for speaking authoritatively.”

Of their errors, the forecasters contend that it’s only a matter of time before they master the techniques. Though that day will never arrive, economic forecasting remains an integral part of the economics mainstream. The original motto of the Econometric Society still holds sway: “Science is Prediction.”

Whether one uses a ruler to extend an economic trend into the future, or a sophisticated econometric model with dozens of equations, the problem is still the same: there are no constant relations in human affairs.

Economics, unlike the natural sciences, deals with human actions, plans, motivations, preferences, and so on, none of which can be quantified. Even if it were possible to quantify these things, changing tastes (and all the factors that affect tastes) would make the data almost instantaneously useless to the forecaster. And then there are the millions of “unimaginable” things, like Eisenhower’s heart attack, which constantly crop up, influencing people in unpredictable ways.

Economic statistics (i.e., history) do not imply anything about the future. Because data show the relation between price and supply to be one way for one period of time doesn’t mean that it cannot change. As Mises pointed out, “external phenomena affect different people in different ways” and “the reactions of the same people to the same external events vary.”

Some economic forecasters like to argue that economic forecasting is not unlike predicting the weather (and should also be equally difficult). Not only is the nature of these two problems entirely different, but one can reasonably expect that as scientific methods become more sophisticated, weather prediction could theoretically approach perfection. This is because there are constant relations among physical and chemical events. By experimenting in the laboratory, the natural scientist can know what these relations are with a high degree of precision. However, human society is not a controlled laboratory. This fact makes the forecaster’s job of accurately predicting future events impossible.

Forecasters try to get around this problem by linking events in historical chains, and randomly guessing that if one variable reoccurs, then the others will necessarily follow. But this is a sophisticated version of the logical fallacy, post hoc ergo propter hoc (after this, therefore, because of this). This has led major forecasters to seriously study astrological patterns and to build mathematical models that correlate weather patterns with business cycles. Once the forecaster throws out economic logic, anything could have caused anything else, and all variables in the universe are open to study. One mainstream forecasting theory for investors, for example, is based on the rate at which rabbits multiply.

Does this mean we can know nothing about the future? No, the best forecasters are successful businessmen, whose entrepreneurial judgment allows them to anticipate consumer tastes and market conditions. As Murray N. Rothbard points out:

The pretensions of econometricians and other “model-builders” that they can precisely forecast the economy will always flounder on the simple but devastating query: “If you can forecast so well, why are you not doing so on the stock market, where accurate forecasting reaps such rich rewards?”

The myth that economists can predict the future is not just harmless quackery, however. Central planners use the same theories to direct the economy. Yet by setting production goals with the data collected by the planners themselves, they destroy the very process that directs free-market production.

Central planners try to overcome uncertainty by substituting formulas for entrepreneurial judgment. They believe that they can replace the price system with commands, but they miss the whole purpose of individual action on the free market. As Ludwig von Mises said, they make “not the slightest reference to the fact that the main task of action is to provide for the events of an uncertain future.” In that sense, central planners are no different from professional forecasters.

Don’t expect unemployment among forecasters, however. Many have cushy jobs with the Congress, the White House, and virtually every agency of the U.S. government, and will happily issue predictions to no end.

In the Austrian view, on the other hand, economists have three functions: to further our understanding of the free market, to identify possible consequences of government policies, and to counter economic myths.

Economic forecasting has nothing to do with these objectives. In fact, by presenting itself as the only scientific dimension of economics, forecasting has helped discredit the whole discipline, and fueled an exodus of economists from the more mundane academic world to the arena of state control and coercion, to the detriment of every American.