Triumph of the Red-State Fascists 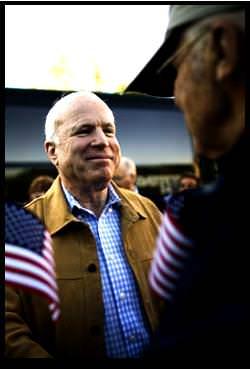 Every Republican I've spoken to is mystified that John McCain has sewn up the Republican nomination. For his entire career, he has been more statist on both domestic and foreign policy than even the typical Republican. He has been considered a "liberal," and not in a good sense. He doesn't share any of the values that are said to make up the Republican consensus on economics or culture or religion. His personal baggage is heavy and a mile long. He had no dedicated constituency within the party.

Of course I'm not talking to the run-of-the-mill Republican. There are vast hordes of these people who have never read a book and vote only by the most sordid political instinct known to man. McCain is their candidate. It comes down to one thing only: the simple-minded, unthinking impression that he is a war hero and, more than anyone else, has what it takes to smash the evil foreign peoples who want to kill us. In short, he appeals to the militaristic, nationalistic impulses of the base Republican base.

Murray Rothbard used to tell the story of speaking to conservative and Republican audiences in the late 1950s and early 1960s. There would be large groups gathered for various talks on economics and politics. He would give a lecture on the problem of price controls, or protectionism, or high taxes. People really liked what he had to say. They would clap, and learn from his lecture.

Then he would sit down. At some point in the course of the conference, the appointed anti-Communist speaker would rise to the podium. He would decry the evil of Russia and its atheistic system of government. He would call for beefing up nuclear weapons and hint darkly of the necessity of war. He would end with an apocalyptic statement about the need for everyone to completely dedicate themselves to eradicating the communists by any means necessary. No talk of limiting or cutting government; quite the opposite.

So how would these people, who clapped for Murray, respond to the warmonger? Insanely, wildly, uncontrollably. They would stand and scream and yell and cheer, getting up on their chairs and putting their hands together high in the air. The applause would go on for five minutes and more, and the speaker would be later mauled for autographs. His books would sell wildly.

Meanwhile, poor Murray would stand there in alarm. How could these same people cheer both a call for liberty and a call for empire, and, most notably, give their hearts over to the maniacal nationalist while being merely polite to a call for the same liberty that had led this party to oppose FDR's domestic and foreign-policy? It was experiences like these that led him to write the most important dissection of the Republican party ever to appear: The Betrayal of the American Right. It is here that Murray engages in a deep, soul-searching look at his own role in red-baiting in the 1950s. He had hoped to use the anti-Communist movement to educate people about the need for freedom.

"It is clear that libertarians and Old Rightists, including myself, had made a great mistake in endorsing domestic red-baiting, a red-baiting that proved to be the major entering wedge for the complete transformation of the original right wing," writes Murray. Instead of supporting freedom, the anti-Communist movement ended up acculturating Republicans to the imperial mindset. The moral priority of crushing a foreign government trumped every other issue.

At the same time, the libertarianism of the GOP's domestic agenda was supplanted by a belief that "big government and domestic statism were perfectly acceptable, provided that they were steeped in some sort of Burkean tradition and enjoyed a Christian framework." Fiery individualism and radicalism were replaced by a longing for a static, controlling elite of the European sort. Liberty was washed away.

That was fifty years ago. Today the same priorities abound on the Right: first, nationalism and empire, and, second, longing for order in the domestic area. The switch from anti-Communist militarism to anti-Islamic imperialism was not difficult. They took a chapter out of Orwell, and merely changed the name of the enemy.

All of this laid the groundwork for McCain. Each Republican presidential contender has been worse than the last: Nixon and Reagan felt the need to endorse some libertarian themes in their campaigns, and even the two Bushes used limited government and anti–big government rhetoric. But that has evaporated, replaced now by the most virulent jingoism combined with domestic statism.

Many of my Republican friends criticize McCain as a leftist. I can see the point. But we ought not be too quick to believe that all forms of antilibertarian ideology are leftist. We need to recognize that there is a form of nonleftist statism of a very distinct kind. It is not socialist in the traditional sense. It believes in a corporate state, combined with protectionism and belligerence in foreign policy. The right-wing predecessors here are Mussolini, Franco, and Hitler, and the name of the ideology is fascism.

For more on this, see John T. Flynn's As We Go Marching. He listed some points of the fascist program. It is a form of social organization "in which the government acknowledges no restraint upon its powers," is managed by the "leadership principle," and in which "the government is organized to operate the capitalist system and enable it to function — under an immense bureaucracy." In fascism, "militarism is used as a conscious mechanism of government spending," and "imperialism is included as a policy inevitably flowing from militarism." "Wherever you find a nation using all of these devices," he wrote, "you will know that this is a fascist nation."

Republicans are prepared to push this agenda, altered to fit the American political context, in this election. Their number one tactic to retain power is impugning the patriotism of Barack Obama. It seems like a puzzle, but an opinion piece by William Kristol in the New York Times offers a clue into the basis of the Republican campaign. He first makes a big deal out of the fact that Obama used to wear an American flag pin on his coat, but now no longer does so. He drags this up as if to accuse him of disloyalty to the American cause.

It is hard to imagine a more brainless and low-level tactic than to harp on such things. It compares only to the periodic campaigns by Republicans on the issue of flag burning, as if whether a person burns a privately owned flag has any bearing at all on the well-being of the country. But then Kristol goes further into the depths of depravity by attempting to paint Obama's wife as guilty of treason for saying that she is proud of America "for the first time in my adult lifetime." By citing these words, he is implying that she is an America hater.

Now, what buttons is Kristol trying to push here? It is the now familiar fascist theme: loyalty to the nation state and its wars must be the first and only test of worthiness to serve in public office. Folks, this is a cloud no bigger than a man's hand that is very likely to mutate into a full storm. Sad to say, the Republican faithful, the same people that were stupid enough to vote for McCain, will probably go for it.

How I recall those heady days of the 1970s, when everyone said that the move of the neoconservatives into the Republican party portended a raising of the intellectual level. Quite the reverse. These people are taking things straight into the gutter, where they had already been tending since the late 1950s.