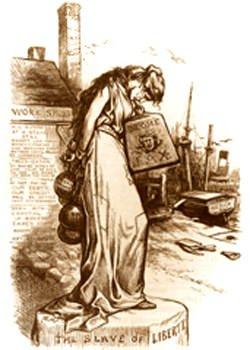 Have you never chanced to hear it said, "There is no better investment than taxes. Only see what a number of families it maintains, and consider how it reacts upon industry: it is an inexhaustible stream, it is life itself."

In order to combat this doctrine, I must refer to my preceding refutation. Political economy knew well enough that its arguments were not so amusing that it could be said of them, repetitions please. It has, therefore, turned the proverb to its own use, well convinced that, in its mouth, repetitions teach.

The advantages which officials advocate are those which are seen. The benefit which accrues to the providers is still that which is seen. This blinds all eyes.

But the disadvantages which the taxpayers have to get rid of are those which are not seen. And the injury which results from it to the providers is still that which is not seen, although this ought to be self-evident.

You compare the nation, perhaps to a parched tract of land, and the tax to a fertilizing rain. Be it so. But you ought also to ask yourself where are the sources of this rain, and whether it is not the tax itself which draws away the moisture from the ground and dries it up?

Again, you ought to ask yourself whether it is possible that the soil can receive as much of this precious water by rain as it loses by evaporation?

There is one thing very certain, that when James B. counts out a hundred sous for the tax gatherer, he receives nothing in return. Afterwards, when an official spends these hundred sous, and returns them to James B., it is for an equal value in corn or labor. The final result is a loss to James B. of five francs.

It is very true that often, perhaps very often, the official performs for James B. an equivalent service. In this case there is no loss on either side; there is merely an exchange. Therefore, my arguments do not at all apply to useful functionaries. All I say is — if you wish to create an office, prove its utility. Show that its value to James B., by the services which it performs for him, is equal to what it costs him. But, apart from this intrinsic utility, do not bring forward as an argument the benefit which it confers upon the official, his family, and his providers; do not assert that it encourages labor.

But when James B. gives a hundred sous to a government officer, and receives nothing for them unless it be annoyances, he might as well give them to a thief. It is nonsense to say that the government officer will spend these hundred sons to the great profit of national labor; the thief would do the same; and so would James B., if he had not been stopped on the road by the extralegal parasite, nor by the lawful sponger.

Let us accustom ourselves, then, to avoid judging of things by what is seen only, but to judge of them by that which is not seen.

Last year I was on the Committee of Finance, for under the constituency the members of the opposition were not systematically excluded from all the commissions: in that the constituency acted wisely. We have heard M. Thiers say, "I have passed my life in opposing the legitimist party and the priest party. Since the common danger has brought us together, now that I associate with them and know them, and now that we speak face to face, I have found out that they are not the monsters I used to imagine them."

Yes, distrust is exaggerated, hatred is fostered among parties who never mix; and if the majority would allow the minority to be present at the commissions, it would perhaps be discovered that the ideas of the different sides are not so far removed from each other; and, above all, that their intentions are not so perverse as is supposed. However, last year I was on the Committee of Finance. Every time that one of our colleagues spoke of fixing at a moderate figure the maintenance of the President of the Republic, that of the ministers, and of the ambassadors, it was answered,

"For the good of the service, it is necessary to surround certain offices with splendor and dignity, as a means of attracting men of merit to them. A vast number of unfortunate persons apply to the President of the Republic, and it would be placing him in a very painful position to oblige him to be constantly refusing them. A certain style in the ministerial saloons is a part of the machinery of constitutional governments."

Although such arguments may be controverted, they certainly deserve a serious examination. They are based upon the public interest, whether rightly estimated or not; and as far as I am concerned, I have much more respect for them than many of our Catos have, who are actuated by a narrow spirit of parsimony or of jealousy.

But what revolts the economical part of my conscience, and makes me blush for the intellectual resources of my country, is when this absurd relic of feudalism is brought forward, which it constantly is, and it is favorably received too:

"Besides, the luxury of great government officers encourages the arts, industry, and labor. The head of the state and his ministers cannot give banquets and soirées without causing life to circulate through all the veins of the social body. To reduce their means would starve Parisian industry and consequently that of the whole nation."

I must beg you, gentlemen, to pay some little regard to arithmetic, at least; and not to say before the National Assembly in France, lest to its shame it should agree with you, that an addition gives a different sum, according to whether it is added up from the bottom to the top, or from the top to the bottom of the column.

For instance, I want to agree with a drainer to make a trench in my field for a hundred sous. Just as we have concluded our arrangement the tax-gatherer comes, takes my hundred sous, and sends them to the Minister of the Interior; my bargain is at end, but the minister will have another dish added to his table. Upon what ground will you dare to affirm that this official expense helps the national industry? Do you not see, that in this there is only a reversing of satisfaction and labor? A minister has his table better covered, it is true; but it is just as true that an agriculturist has his field worse drained. A Parisian tavern-keeper has gained a hundred sous, I grant you; but then you must grant me that a drainer has been prevented from gaining a hundred sous. It all comes to this—that the official and the tavern-keeper being satisfied, is that which is seen; the field undrained, and the drainer deprived of his job, is that which is not seen. Dear me! how much trouble there is in proving that two and two make four; and if you succeed in proving it, it is said “the thing is so plain it is quite tiresome,” and they vote as if you had proved nothing at all.