Steve Jobs Was No Innovator — He Was Better 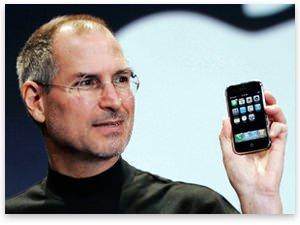 Over the past few months since his unfortunate passing, the media has consistently praised Steve Jobs for his many talents. Frequently, he has been described as one of history's greatest innovators, standing shoulder to shoulder with the likes of Einstein, Da Vinci, and the Wright brothers. While such statements about Jobs's talents are not false, they certainly miss the point.

To "innovate" is to "introduce or make new." Jobs rarely accomplished this feat. In fact, Jobs was notorious for plagiarizing great ideas. He poached the concept of a graphical user interface (GUI) from Xerox. He bought Pixar from George Lucas. He copied Sony's Walkman. He was even a poor programmer, relying heavily on Steve Wozniak's talent during Apple's formative years. Furthermore, in a 1996 interview for the PBS series Triumph of the Nerds, Jobs himself admitted, "We have always been shameless about stealing great ideas."

But back in the 1970s, while his computer club was happy meeting once a week, IBM was content selling mainframes, and Microsoft was a small startup in New Mexico, Jobs already recognized the power of this new technology and envisioned personal computers in every home in the world.

While not necessarily an innovator, Jobs personifies something far more powerful in a free society — the entrepreneur. An "entrepreneur" is one who "organizes an enterprise through risk and initiative." He accomplished this feat in spades.

Jobs enjoyed a gift few possess: the ability to transform a fledgling idea into a masterpiece. He rarely created from scratch, but he could recognize what we "needed" long before we even wanted it. As Mises eloquently states in Human Action,

What distinguishes the successful entrepreneur and promoter from other people is precisely the fact that he does not let himself be guided by what was and is, but arranges his affairs on the ground of his opinion about the future. He sees the past and the present as other people do; but he judges the future in a different way.

Like the Romans to the Greeks, Jobs realized that wonderful inventions already existed but were not being harnessed to their potential. In response, he stood shamelessly on the shoulders of giants, bravely utilized their creative energy, and boldly maximized the power of the free-market system. As a result, Jobs could transform great ideas into palatable form.

Case in point: I typed this article, in my home, on a personal computer.

Contrary to popular belief, not everything Jobs touched turned to gold. Remember the Lisa or the Pippin, Apple's foray into the video-game-console market? Perhaps the still-work-in-progress Apple TV?

Maybe Apple's biggest flop, the Newton MessagePad, turned into Jobs's crowning achievement. To review, the Newton was both a tablet operating system (OS) and a personal digital assistant (PDA). The Newton OS dates back to the 1980s and the Newton MessagePad PDA debuted in 1993. The entire package was ahead of its time, even as far as the now-extinct PDA market was concerned.

The complaints were endless: the price was too high; battery life was too short; the interface was clunky; and there was a lack of third-party support. The list goes on and on. Even The Simpsons poked fun at the device.

However, Apple was on to something, and Jobs knew it. While he could not put his finger on it years ago, this was a winner. Jobs swallowed his pride and suffered the losses, but he refused to quit. Like all great entrepreneurs, he doubled down, studied the market, redesigned the product, and waited for the right moment to deliver his first portable megahit — the iPod. Still not content, Apple set new standards with the iPhone and iPad.

And the Spirit Lives On

Jobs is to the entrepreneurial spirit what Michael Jordan is to basketball or Beethoven to music. He is a spiritual successor of the great industrialists of a century ago. From Cornelius Vanderbilt and James J. Hill to Phil Knight and Bill Gates, entrepreneurs have always made life better. Today, the torch, burning as brightly as it did centuries ago, has passed to new titans like Mark Zuckerberg.

While Jobs may be gone, that entrepreneurial spirit burns inside everyone. Unfortunately, few possess his fearless initiative to march into the unknown. While it is fitting that much of the world learned of Jobs's passing on a device he created, his true gift will not go extinct.