Stateless in Somalia, and Loving It | Mises Institute
Skip to main content

GET NEWS AND ARTICLES IN YOUR INBOXPrint
A
A
Home | Mises Library | Stateless in Somalia, and Loving It

Stateless in Somalia, and Loving It 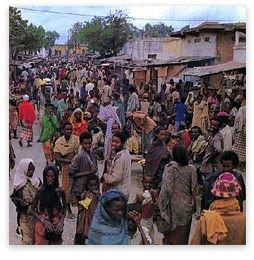 Somalia is in the news again. Rival gangs are shooting each other, and why? The reason is always the same: the prospect that the weak-to-invisible transitional government in Mogadishu will become a real government with actual power.

The media invariably describe this prospect as a "hope." But it's a strange hope that is accompanied by violence and dread throughout the country. Somalia has done very well for itself in the 15 years since its government was eliminated. The future of peace and prosperity there depends in part on keeping one from forming.

As even the CIA factbook admits:

"Despite the seeming anarchy, Somalia's service sector has managed to survive and grow. Telecommunication firms provide wireless services in most major cities and offer the lowest international call rates on the continent. In the absence of a formal banking sector, money exchange services have sprouted throughout the country, handling between $500 million and $1 billion in remittances annually. Mogadishu's main market offers a variety of goods from food to the newest electronic gadgets. Hotels continue to operate, and militias provide security."

To understand more about the country without a government, turn to The Law of the Somalis, written by Michael van Notten (1933-2002) and edited by Spencer Heath MacCallum, sheds light on the little known Somali law, culture and economic situation. Somalia is often cited as an example of a stateless society where chaos is the "rule" and warlords are aplenty.

The BBC's country profile of Somalia sums up this view as widely publicized by the mainstream media: "Somalia has been without an effective central government since President Siad Barre was overthrown in 1991. Fighting between rival warlords and an inability to deal with famine and disease led to the deaths of up to one million people."

The first sentence is indeed true: when the president was driven out by opposing clans in 1991, the government disintegrated. The second sentence, however, depicts Somalia as a lawless country in disorder. As for disorder, Van Notten quotes authorities to the effect that Somalia's telecommunications are the best in Africa, its herding economy is stronger than that of either of its neighbors, Kenya or Ethiopia, and that since the demise of the central government, the Somali shilling has become far more stable in world currency markets, while exports have quintupled.

As for Somalia being lawless, Van Notten, a Dutch lawyer who married into the Samaron Clan and lived the last dozen years of his life with them, specifically challenges that portrayal. He explains that Somalia is a country based on customary law. The traditional Somali system of law and politics, he contends, is capable of maintaining a peaceful society and guiding the Somalis to prosperity. Moreover, efforts to re-establish a central government or impose democracy on the people are incompatible with the customary law.

Van Notten distinguishes between the four meanings of the word "law" — statutory, contractual, customary, and natural law. The common misunderstanding is that legitimate rules only come from formally established entities and that therefore a country without a legislature is lawless. Refuting that misunderstanding, van Notten explains that a perfectly orderly and peaceful country can exist when people respect property rights and honor their contracts. While natural laws denote peace, liberty, and friendly relations, statutory laws represent commands. Statutory laws reflect the preferences of legislators, who impose "morality" on those they govern and regulate their ability to voluntarily enter into contracts. This, according to van Notten, is wrong from the standpoint of both morality and law.

Customary laws develop in a country like Somalia in the absence of a central legislating body. Rules "emerge spontaneously as people go about their daily business and try to solve the problems that occasionally arise in it without upsetting the patterns of cooperation on which they so heavily depend" (Van Notten, 15: 2005). Van Notten contends that the Somali customary law closely follows the natural law and therefore should be preserved.

The extended family is the core of Somali society. Families descended from common great grandparent form a jilib, the basic independent jural unit, and a number of jilibs in turn form a clan. Each family, jilib, and clan has its own judge, whose role is to facilitate the handling of disputes by deciding where the liability lies and what compensation should be paid. For example if a man is murdered, the murderer's clan gives the victim's clan one hundred camels (the blood price). Verdicts are widely discussed, and a judge who does not base his decision on norms prevailing in the community is unlikely to be asked to settle further disputes. Thus while a judge may form his own principles, his customers will decide his competence as a judge.

The family of the successful plaintiff can resort to self-help to enforce a payment, or the court can order the men of the community to do so. Every clansman is insured by his jilib. For instance, if A violates B's right and it is held that A should pay compensation to B, A's jilib will provide the compensation. Hence the jilib functions as "a safety net, venture capital, protection, and insurance" (Van Notten, 74: 2005).

If a clan member constantly violates others' rights and his jilib repeatedly pays compensation, the jilib can expel him. On the other hand, there is nothing to stop someone from leaving his jilib and joining another, if it will have him, or setting up his own. A person without a jilib is unthinkable, an outlaw, because he is not insured against liabilities he might incur toward others. Hence he loses all protection of the law.

Decisions are enforced and oaths taken in ways that may seem unsophisticated or odd, yet they are the custom and must be respected. If, for instance, the defendant refuses to comply with the verdict without appealing his case to a higher court, he can be tied to a tree covered with black ants until he agrees. When evidence is sketchy or lacking, several types of oaths are available. A strong oath is one that is repeated fifty times. Another type is a divorce oath. If a man testifies under divorce oath and it is later found that his testimony was false, his marriage becomes null and void.

Independent extended families being the basic social and economic unit does have its weaknesses. While clansmen are under no obligation to share their wealth with other clans, they must share it to a significant extent within the clan. Van Notten notes this as a drawback and states that the "law makes clansmen somewhat a prisoner of their clan." Since individuals differ in their productivity, it is inevitable that some family members will benefit from more successful members. In addition, as a way of promoting internal cohesion, extended families may foment animosity against other families. Van Notten also writes that foreigners are not recognized under Somali law unless they marry into a clan or come under the protection of a Somali patron.

This has important economic implications. For example, because land cannot be sold outside the clan, foreigners would generally be prohibited from purchasing it. One way to work with this might be land leasing, which is possible under customary law. Somali elders suggested to Van Notten that a group of foreign investors could form their own 'clan' on a leased territory and develop it, say for a free port, on a land-lease basis.

An important discussion centers around democracy. In 1960, when the British and Italian colonizers withdrew from Somalia, they formed the government of the Republic of Somalia as a democratic entity. Nine years later, the country was under a dictatorship. Through these events, according to van Notten, many Somalis realized that they could return to their traditional form of governance founded on independent clans.

Nevertheless, since 1991, the United Nations has made efforts to promote the establishment of a democratic government in Somalia. Van Notten strongly argues that such government is incompatible with the Somali customary law, which prizes life, liberty, and property. He asserts that democracy is not even a viable option:

"When the electorate is composed of close-knit tribal, religious, linguistic or ethnic communities, the people invariably vote, not on the merits of any issue, but for the party of their own community. The community with the greatest numbers wins the election, and the minority parties then put rebellion and secession at the top of their political agenda. That is nothing but a recipe for chaos." (van Notten, 127; 2005)

Van Notten contends that the argument that a central government is a prerequisite for making treaties with foreign government agencies is flawed because the Somalis have long dealt with foreign governments and their agencies on a clan-by-clan basis. A common ministry of foreign affairs would pose a grave danger because it would undermine the customary law. He suggests that clans sharing a common interest could appoint a private company as their common agent. Van Notten and MacCallum further dispute that a central government is needed to provide "public" services. They propose the establishment of freeports, land-leasing, and commercial insurance companies. Certain sectors such as telecommunications have been thriving in Somalia's free market and government regulation could only hinder their growth.

"A democratic government has every power to exert dominion over people. To fend off the possibility of being dominated, each clan tries to capture the power of that government before it can become a threat. Those clans that didn't share in the spoils of political power would realize their chances of becoming part of the ruling alliance were nil. Therefore, they would rebel and try to secede. That would prompt the ruling clans to use every means to suppress these centrifugal forces… in the end all clans would fight with one another." (van Notten, 136; 2005)

He thus asserts that efforts by the United Nations are not only futile, but also harmful to the Somalis.

Van Notten calls for documentation of clan law systems to facilitate doing business with foreigners, especially, on a nationwide scale. He argues that by compiling all the major jurisprudence under Somali law, the customary law will more readily evolve into a coherent body of common law. But if each clan is only bound by its own rules and custom, and if the Somalis so far never felt the need for the "merger of clan law systems," why would compiling rules of all different clans be necessary? Moreover, it is unclear how such a task can effectively be undertaken when the customary law evolves constantly, and clans have a nomadic character.

The book does not contain information regarding the Somali presidential election in 2004, which took place in Kenya. Efforts to construct a formal government continue but they appear to be in vain, inspiring hope in UN bureaucrats and the news media, but only fear and loathing in Mogadishu and the rest of the country.

Yumi Kim studied law in London, where she now works in financial services. Send her mail. Comment on the blog.