GET NEWS AND ARTICLES IN YOUR INBOXPrint
A
A
Home | Mises Library | The State: Its History and Development Viewed Sociologically

The State: Its History and Development Viewed Sociologically 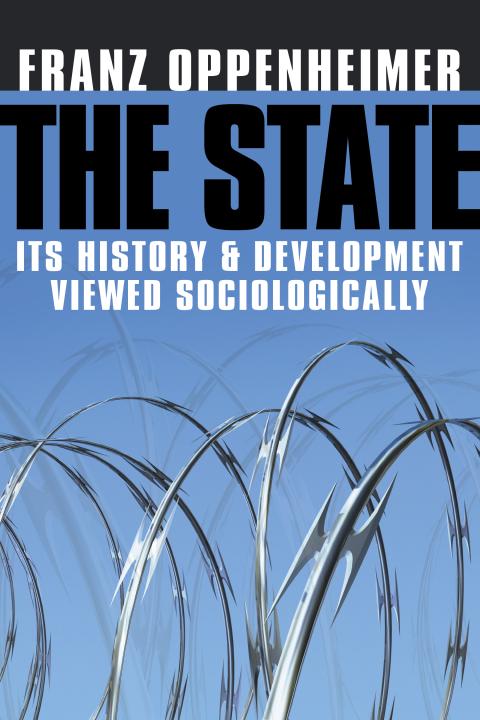 The State Its History and Development Viewed Sociologically_2.pdf

The State Its History and Development Viewed Sociologically_2.pdf

The State Its History and Development Viewed Sociologically_2.epub

The State Its History and Development Viewed Sociologically_2.epub

This is the 1908 book that started it all in the 20th century, the book that kicked off a century of anti-state, pro-property writing. This was the prototype for Nock's writing, for Chodorov's work, and even the theoretical edifice that later became Rothbardianism.

Indeed, Franz Oppenheimer wrote what remains one of the most bracing and stimulating volumes in the history of political philosophy. The author sought to overthrow centuries of fallacious thinking on the subject of the state's origin, nature, and purpose, put its it place a view of the state that constitutes a foundational attack on the structure of modern society.

He utterly demolishes the social-contract view of the state as it had been advanced by most thinkers since the Enlightenment. He seeks to replace that view with a realistic assessment of the state, one that can only make anyone with statist leanings squirm: he sees the state as composed of a victorious group of bandits who rule over the defeated group with the purpose of domination and exploitation. It achieves its status through a form of conquest, secures its power through relentless aggression, and sees its main function is to secure its status and power.

Consider that when this book was written such views were a scandal, especially in Germany. Oppenheimer, who was a medical doctor who became a professor of sociology, suffered terribly for his libertarian views. Then this book appeared, which stunned even his most vociferous critics with its analytical rigor, historical sweep, and steely resolve. The book has since appeared in more than a dozen languages. In a world that cared about ideas, this would be required reading in political philosophy.

From an economic point view, his analysis holds up even where his language about capitalism and socialism can be somewhat confused. In fact, it was Rothbard's own work that took Oppenheimer's theory and fit it into a free-market framework. But to fully understand the state theory behind modern Austro-libertarian thinking, this work is indispensable.

In essence, he said, there are only two ways for men to acquire wealth. The first method is by producing a good or a service and voluntarily exchanging that good for the product of somebody else. This is the method of exchange, the method of the free market; it’s creative and expands production; it is not a zero-sum game because production expands and both parties to the exchange benefit. Oppenheimer called this method the "economic means" for the acquisition of wealth.

The second method is seizing another person’s property without his consent, i.e., by robbery, exploitation, looting. When you seize someone’s prop­erty without his consent, then you are benefiting at his expense, at the expense of the producer; here is truly a zero-sum "game"--not much of a "game," by the way, from the point of view of the victim. Instead of expanding production, this method of robbery clearly hobbles and restricts production. So in addition to being immoral while peaceful exchange is moral, the method of robbery hobbles production because it is parasitic upon the effort of the producers.

In other words, the state is organized theft, organized robbery, organized exploitation. And this essential nature of the state is high­lighted by the fact that the state ever rests upon the crucial instrument of taxation.

This book is classic, with an introduction by George H. Smith. It is on the must-read list of every libertarian in every generation.

Franz Oppenheimer (1864–1943) was a German-Jewish sociologist and political economist, best known for his work on the fundamental sociology of the state. His book The State: Its History and Development Viewed Sociologically was the prototype for Albert Jay Nock's writing, for Frank Chodorov's work, and even for the theoretical edifice that later became Rothbardianism.

Franz Oppenheimer (1864–1943) was a German-Jewish sociologist and political economist, best known for his work...

The history of primitive peoples shows that the desire to trade and barter is a universal human characteristic.