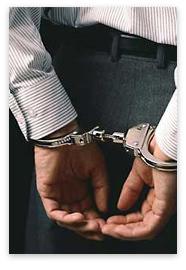 "What are you in for?" the inmate of Lee County jail asked the new prisoner.

"Rolling through a stop sign in my subdivision," answered the new inmate, to gales of laughter from others languishing in the same cell.

As they laugh, crumbs from their hard, dry sandwiches — distributed by the wardens twice per day — flew from their mouths to add to the debris of filth on the floor that was ground up by the cracked plastic sleeping mats and absorbed by the old, thin blankets inmates use to keep warm in this cold and wet 8x8 room.

The new inmate today joined the 500 prisoners, among whom were some of the most violent threats to society — but also people who, like Inmate 501, are no threat to anyone.

He had been trying to make his one phone call, to which you are supposedly entitled when you land in the big house. The phone would only call collect, even for local calls. That meant that it couldn't call cell phones. Most local services don't even have collect-call options anymore. So you dial and dial but the phone might as well be a prop on the wall. There is no way out.

There is also no way for you to be called, by anyone. You have no cell phone. No laptop. No book. No watch, and there is no clock on the wall. No one knows what time it is. No one who does know will tell you. Not even a single scrap of paper are you allowed to take into the cell after your arrest. You can only stand there in your paper-thin prison clothes and plastic sandals.

"Man, this is jail," someone screamed as the new inmate tried to dial for the tenth time. "Jail! Phones don't work in JAIL!"

So Inmate 501 stood for an unknown number of hours, hoping that he would be bailed out by his wife and kids who had seen him handcuffed and dragged away from home after Sunday brunch. He also hoped that this would happen before he needed to use the toilet, which was filthy and frontally exposed to everyone, including the women coming and going.

The saga began last October, when he rolled through the same stop sign in front of a private swimming pool that he and fifty others roll through several times per day. He thought he had paid the ticket but he hadn't, and the court date came and went. He received no other notices.

But something interesting was brewing in local politics after he received the ticket. The local newspapers ran a series that claimed to unearth ticket-fixing going on in the Auburn city government. It seems that some friends of powerful people were getting their tickets dismissed. Auburn was already known for its lax enforcement but this had the whiff of corruption.

The papers lacked details but there were hints that the whole story was a result of a dispute between an elected official and an appointed city manager. The city manager later resigned or was kicked out.

The suggestion of corruption was enough to attract the attention of the FBI, which made some inquiries. The combination of the media pressure and FBI curiosity was enough to force a change in city policy. The new policy in Auburn would be total crackdown on ticket violators, particularly those that didn't pay and didn't show up to their court dates.

Now, usually people who don't show up for court dates for petty issues such as this are just contacted and eventually pay. But technically, they can also be arrested, just as this person was. When the city government is under pressure to show that it is not corrupt but good and clean and tough on crime, the result is that the fine print becomes a license for just about anything.

So in the last several months, the city has been busy issuing warrants for people who have outstanding tickets of any sort. Cops have been tracking down people in their workplaces, homes, on the streets or anywhere, and treating them all like violent offenders.

The new prisoner, for example, who had never been arrested in his life, still had discolored marks on his wrists where the handcuffs had been slapped on.

We tend to think of the law as some sort of oiled machine that works according to the regulations. The truth is that the law is administered by people with a great deal of discretion over how others are treated. The wardens and correctional officials can choose to humiliate a person in whatever way they want. They can put you in prison clothes that fit or in some that are way too tight. They can tell you the time or not. Leave you to languish or make a call for you. They can insult you and lie about your status or be kind.

No one has more discretion than the judge, who holds your life in his hands. You are dependent on his mood of the moment. If he lets you off easy, he considers himself benevolent. If he sentences you to 10 years or a life in prison, he is only doing his job. It's always your fault for not having been sufficiently subservient at the outset.

The dramatic change in Inmate 501's life occurred in the course of minutes. All it took was a knock on the door. It mattered not at all that the supposed crime was completely innocuous. Once you are on the wrong side of the law, your life is officially worth nothing to anyone but those who can do little or nothing to help you.

People talk of government compassion. But there is no compassion in jail, which is where anyone who resists the state — even in the smallest way — ultimately ends up. People talk of social justice but to implement it means requiring everyone to make a choice: obey or face humiliation and servitude.

Yes, people can "file grievances" or "sue," and that is always the first thought of anyone who finds himself in the hands of captors. But to whom do you appeal? Whom do you sue? You are here again appealing to the same class of people, the same group of coercive agents, who have robbed you of your freedom. Your rights extend only as far as your masters allow them to extend.

People who criticize government as nothing but beating, killing, and hanging — to use Mises's phrase — are sometime accused of using exaggerated and hyperbolic language. Surely government is more than that and is not always that. Something as simple as a stop sign doesn't beat you or kill you!

And yet, what the critics of government mean is that all law, even that which appears to be a mere guideline and a help, must ultimately be enforced at the point of a gun. It represents a threat to obey or lose all freedom.

This insight applies to all law, whether it results from a Constitution, legislation, or appears out of nothing more than a regulatory body. Every regulation, no matter how small is enforced at the point of the gun. Every tax can result in handcuffing and jailing and even killing those who fail to fork over. Hidden behind each mandate is an armed tough in jackboots and a bulletproof vest who is prepared to beat and kill to serve the state and its laws.

As legislation extends, so does the coercive arm of the state, its police powers, its jails, and its reach over society. It is like a poisonous fog that descends and grows more by the day, seeping into every nook and cranny of life: schools, businesses, homes, churches. Nowhere is exempt. The sound of the jailer's key rattling grows louder and more ear-piercing. The culture of the jail, where people are treated worse than animals, proliferates. You can't move without risking life or limb.

At some point in his day, Inmate 501's heard someone holler out his name. The electronic click on the bars sounded and the door opened. He had been bailed out, $500 in cash having been extracted from his bank account and forked over to the city police. He was now free — pending payment of the ticket and another court date.

He left behind 500 others who are not so fortunate. Some of them are hardened criminals. Others are in jail for smoking pot. Others were in the same boat as he: a minor traffic violation gone wrong. None have rights. All are captive, like citizens in an occupied city where there is only violence and no law.

But how free is he really? He lives in a society where nothing takes place outside the purview of the state, which is to say that he will always live one step away from the prison cell that was his home for a day. One or two wrong moves and he has lost it all. All of society is not yet a jail such as you find in totalitarian societies or a society under occupation due to military conquest, but with every expansion of the state, the jailers get that much more power over all of us.

Their power is not always overt but it always lies in waiting. This was triggered by a zealous cop looking to fill a ticket quota, and an attempt to clean up government from corruption — prompted by a media-driven non-scandal that attracted the attention of the Feds. It resulted in personal catastrophe. We really don't get all the government we pay for, and thank goodness. Lord protect us on the day that we do.