The Social Function of Insurance 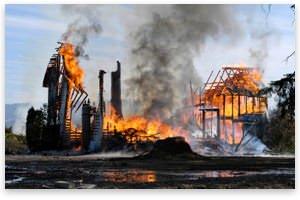 Legal requirements and prudence require most adults to carry various insurance policies. Although we may often take insurance for granted, it serves a valuable social function. Beyond its standard role recognized by all economists, insurance plays an important part in many Austrolibertarian proposals for privatizing traditionally state-run enterprises.

To put it succinctly, the provision of insurance allows for risk sharing that makes every participant better off. When insurance companies take in premium payments in exchange for pledging conditional payouts, these are win-win transactions that benefit the companies and their policyholders.

Consider a community with 100,000 similar families, where each household is worth $200,000. Suppose that every year, on average, 100 of these homes burn down, and suppose that the families are all equally susceptible (as far as anyone can tell) to such a catastrophic event.

If this were the end of the story, each family every year would play a lottery of sorts, in which it faced a 99.9 percent probability of losing nothing, and a 0.1 percent probability of losing $200,000. Although charity and neighborly volunteers would no doubt help a family facing such hardship, this common menace — which could strike anyone at a moment's notice — would strike seemingly at random, focusing its wrath on one unlucky family out of a thousand every year.

In this bleak scenario, a group of investors has a bright idea. They pool their funds and then begin selling "fire insurance" to people in the community. Specifically, if a family pays the investors $210 every year, then the investors promise to send the family a check for $200,000 in the unlikely event that their house burns down.

This arrangement is obviously beneficial to the investors — at least once a sizable fraction of the community starts participating. With a big enough client base, the investors can be reasonably confident that they will take in more revenue in premium payments in a given year than they will have to pay out in damage claims. Actuarially speaking, the investors earn $10 per year from every client over and above their expected damage claims. Out of this surplus, the investors have some overhead expenses (an office, record-keeping, claims adjusters to investigate fraud, etc.), but the rest they keep as the return on their initial start-up capital.

What is not as obvious is that the customers benefit too. Here the benefit is not in the accounting; each family "loses" $210 per year in premium payments. Even if we factor in the implicit risk of a house fire, each family still "loses" $10 per year to the insurance company.

But this is irrelevant. What matters in economics is subjective preference. The voluntary clients of the fire insurance company benefit from the arrangement just as surely as they benefit from a gym membership that makes them "lose" money too.

Specifically, the participating family has swapped a very risky lottery — in which it faced a 99.9 percent probability of nothing happening, but a 0.1 percent probability of losing $200,000 — for a certain loss of $210. Most people are "risk averse," meaning that they would prefer scenarios in which they are not subject to wild swings in their wealth, even if the alternative is actuarially "unfair" as in this example. In short, there is nothing irrational or uneconomic about a family being willing to pay $210 to eliminate a 0.1 percent chance of losing $200,000.

This is the essence of insurance: rather than concentrating the disaster on a small segment of the population, the losses are effectively spread out among all the policyholders. In practice, insurers quote different premiums based on the risk of the applicant, and may deny coverage altogether for particularly risky cases. But the general function of insurance is to allow customers to exchange the lottery nature has given them for something much more pleasant to bear.

People sometimes say, "When you buy fire insurance, you're betting that your house will burn down and the insurance company is betting it won't." But this totally misconstrues the nature of insurance.

In the first place, the insurance company clearly isn't gambling at all. If it only had a few clients, then it would be. With our numbers above, if the investors only took on one client, then they would effectively be doubling their own exposure to fire in exchange for an extra $210 per year. That would be gambling.

However, if the investors take on half of the community as clients — so that there is a pool of 50,000 households paying them premiums — then they are no longer gambling, assuming that their actuaries have correctly estimated the odds of a house burning down. The insurance company isn't betting that a given client's house will or won't burn down. It knows that some will and some won't, and it is only assuming that it has correctly identified the risk pool and placed equivalent homes into it. This is no more gambling than running a casino is; the owners of a Vegas resort aren't betting that each player who sits down at the blackjack table will bust.

From the policyholder's perspective, if anything, insurance is the opposite of gambling. When someone gambles, he typically gives up a small amount of money in exchange for a more uncertain future, in which he faces a large probability of getting nothing back but a small probability of winning a much larger sum than he initially paid out.

In contrast, with insurance the client pays a small amount of money (the premium) in exchange for a more certain future, in which his wealth will not fluctuate as wildly in different possible scenarios.

There is a very legitimate sense in which someone who foregoes various types of insurance is living recklessly or "gambling." To repeat: if anything, buying insurance is the very opposite of gambling.

The Austrians on Insurance

For example, I have long argued that the Federal Aviation Administration should be abolished, and that private-sector insurers could do a much better job regulating air travel safety. Insurance companies — so long as they were operating in a truly free market — would be much better than the TSA at finding the proper balance between air travelers' safety and privacy concerns.

Even more radically, Austrian economists such as Hans Hoppe and Murray Rothbard (see chapter 12 of For a New Liberty) have described how the functions of police services and even military defense could be directly provided, or at least augmented, by insurance companies in a world without a monopoly state.

Insurance contracts provide a mutually beneficial arrangement among policyholders and providers. For those wishing for a more thorough treatment, I recommend Huerta de Soto's magisterial work on bank credit and the business cycle, which just so happens to contain several passages explaining the nature of insurance from an Austrian perspective.