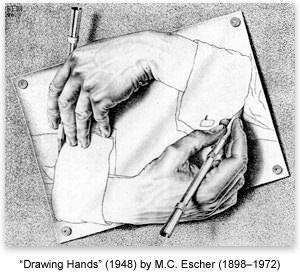 [Chapter 4, The Philosophy of Ownership]

If the idea of owning property privately began as I have conjectured, then the self-identification of the individual as a unique center of consciousness not only assisted in orienting him to his surroundings, but awakened in him the recognition that he owned himself.

Each person grows to maturity, taking particular note of his own configuration, skin texture, features, appendages, and blemishes. Never will he know anything quite as well as he knows his own body. As he identifies himself with his physical structure, he will turn his attention within to note his own mental processes, and to wonder at this strange function of cognition and this utterly fascinating ability to think and remember and even to think about thinking and remembering. He develops cravings for food and drink and for other satisfactions, he experiences pain and joy, and centers himself in the property of his person.

If he does not formally think through the process wherein he recognizes that he owns himself, he nonetheless adopts all the attributes of ownership over himself. Doubtless, many early thinkers recognized the fact of man's ownership of his person, although no one phrased it better than John Locke:

Though the earth and all inferior creatures be common to all men, yet every man has a "property" in his own "person." This nobody has any right to but himself.

The process whereby the child first becomes conscious of himself, and finally awakens in maturity to the recognition of his full self as incontrovertibly unique and separate from the rest of creation, is the process of maturing. There is no fixed time schedule for this maturation. Some develop rapidly and sense their complete control over their energies and facilities before they reach their teens. Others develop slowly, passing into the twenties and even the thirties until the process is as complete as it ever will be for them.

The parental task in raising children is essentially telescoped into the attainment by the child of self-realization and self-control. The more rapidly this can be accomplished, the more thoroughly the task can be done, the quicker the person can emerge as an adult, irrespective of his chronological age.

From man's recognition that he owns himself, and from the idea of private ownership which begins at this point, if not chronologically at least rationally, it is but a step to the creation of one kind of improper ownership the condition in which it is presumed that one person owns another.

If a man owns himself, why can't he own another? It would seem, superficially, that he could. Certainly, mothers and, later, fathers looked upon their offspring as chattels. Children were viewed as property and not as persons.

For centuries, women were treated as chattels belonging to their fathers, husbands, brothers, or uncles; they were never actually released into full adulthood as self-owning persons. The woman who, through circumstance, might find herself alone in the world and essentially unowned, was deemed either an evil person or the epitome of misery. Someone must assume responsibility and take her into a condition of ownership, through marriage or some other relationship.

The custom of one man owning another opened the door to long ages of slavery. On the field of battle, when the vanquished surrendered to the victor, it was presumed that he lost all rights to his life and hence all rights to any property. If the victor spared him, he was a slave, whose life was instantly forfeit at any time that suited the victor's pleasure. The concept of slavery might also have arisen through the generative process wherein it was presumed that women were natural slaves to men, or that children were the properties of either or both parents.

If one contemplates the situation, it will be seen that the slave relationship is wholly improper for it presumes to transfer the control of one living man into the hands of a second living man. The condition is contrary to nature and can only be maintained if both play their specific assigned roles. The slave must act as though he did not control himself, as though, indeed, the slave-master did control him. The slave-master must act as though he really could and did control the slave. But the slave always controls himself, even though he may do so in harmony with his owner's wishes. It is simply impossible for the owner to exert control.

By no process of the mind can the owner of the slave cause the slave to flex a single muscle. The only process open to the slave owner is to impose force or the threat of force. If obedience is obtained, it is because the slave elects to do as he is told. But he must be the actor in respect to his own energy. His owner cannot generate or control the slave's energy. A condition of slavery must be classified as one instance of incorrect ownership. In this condition, a man seeks to control another man as though he were a property and not a man.

A marriage relationship in which it is presumed that one spouse owns the other is equally fictitious. The same fallacy would appear if a parent or both of them presumed to own their children. The child is an owner of himself, from birth. The fact that he may not know this, and the fact that he does not have full control of his physical or mental facilities, in no way remove his ownership of himself.

An adult who is injured in some way, who may be ill or decrepit in old age, is still recognized as an owner of himself and his other properties. He may have to be waited upon hand and foot, yet his ownership of himself is not questioned, so long as he lives. The same realization should apply to all persons, infants included. I would set down as the fundamental instances of incorrect ownership the ancient practice of possessive marriage, possessive child-parent relationships, and control of the slave obtained in battle or in any other way.

This idea of owning another person is so prevalent that it is not unusual for employers to think of themselves as the actual owners of their employees and to act accordingly. Labor union leaders often act as though they owned their dues-paying members.

The labor union leader may obtain a member but he does not own the member, nor does the member own the organization or the labor leader. Each has contracted for certain specifics; the one for the payment of dues, the other for certain collective assurances.

Government officials frequently view the taxpayers as a kind of productive herd to be milked and controlled, just as the ancient slave-master presumed to control the person of his slave. The relationship between government and taxpayers is probably closest to the ancient idea of slavery. The relationship is hardly contractual, however one stretches the imagination.

For a contract to exist in fact, both parties to the exchange must voluntarily agree to the terms of the contract. When governments are imposed and the taxpayers placed under control, the consent of the latter on an individual basis has never been sought, so far as is known. Rather, governments are imposed in much the same way that the victor imposes his ownership over the man defeated on the field of battle. The victor has the power; the vanquished is helpless and must submit.

Here a mystique has been created which supposes that a few men may, by right, impose governmental controls on all with consent of a majority or even a plurality. Usually, those imposing such controls do so after a war in which the vanquished, utterly without the means to resist, are tossed into political serfdom, bound to obey the new state, rather than being claimed by individual warriors as the personal property of the winner after a passage of arms. This practice is so common that few detect in it any form of slavery; most presume that their political control by a party of strong men can be equated with freedom.

Whatever is to be said of this practice of installing political vassalage on whole populations, any effort on the part of one person to own another, and all practices wherein this type of ownership is assumed, lead into much of the sadness and unhappiness that mar so many human relationships.

However, the fact that an improper ownership condition may occur does not justify abandonment of the ownership concept, as many contend. Rather, it behooves us to understand the nature of ownership, to recognize that it is so fundamental to man that it cannot be swept aside, and then to institute self-disciplinary procedures wherein incorrect ownership conditions are not attempted.

Ownership can be said to begin with an effort of will. This can occur when man views himself as the exclusive owner of himself and realizes that decisions to be made affecting his person must invariably be his own. Whether he begins with the recognition of himself as his first property, every property he will ever own will require an act of will. He wishes to possess something — a piece of land, a house, clothing, a tool — as an exclusive owner. A property he acquires, either through original claim or through subordinate claim, becomes an actual extension of himself by this same act of will. Thus, a trespass against a property that is owned, either by theft or some type of vandalism, is actually a trespass against the owner of the property in the same way that a trespass against the person of the owner would be.

The idea insensibly arises through the marriage contract that a sexual partner is somehow a property of his opposite number. This is not the case. Each person owns himself and all of his functions, including those of sex, digestion, cognition, and so on. Among the greatest satisfactions available to human beings are those which recognize other persons as equals in the property ownership of self. Although a man may wish an exclusive association with a particular friend, and while it may be possible to contract for such an exclusive relationship, the fact remains that each party to any association always remains the owner of himself.

This article is excerpted from The Philosophy of Ownership.

Robert LeFevre (1911–1986) ran the Freedom School and Rampart College, founded in 1957. He had a legendary impact on a whole generation of libertarians. LeFevre's complete audio archives is available in Mises Media.