GET NEWS AND ARTICLES IN YOUR INBOXPrint
A
A
Home | Mises Library | Selected Writings of LVM, vol 2: Between the Two World Wars

Selected Writings of LVM, vol 2: Between the Two World Wars 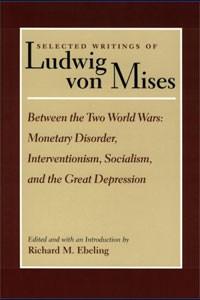 The life and work of Ludwig von Mises is marked by the appearances of large treatises, on topics from money to methodology. But along the way, he also wrote many shorter articles and essays. The essays collected in this volume are from the interwar period, when Mises was working for the Vienna Chamber of Commerce. They concern monetary policy, fiscal policy, the boom and bust cycle, trade, economic calculation, socialism, and the history of ideas.

Some of the essays have never before appeared in print, and only surfaced with the discovery of Mises's personal papers, which had landed in Moscow after World War II. This volume is beautifully produced and printed, with outstanding editorial work by Richard Ebeling. A special bonus is a Soviet-sponsored attack on Mises, appearing in a Soviet journal, and published here for the first time.