GET NEWS AND ARTICLES IN YOUR INBOXPrint
A
A
Home | Mises Library | Schumpeter vs. Keynes 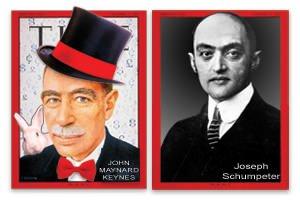 "We're All Keynesians Again" shouted the Wall Street Journal's opinion page recently. The collapse of the financial markets and the subsequent recession, depression, banana, or whatever you want to call it, has the intelligentsia screaming for government money as prescribed by John Maynard Keynes so many years ago. And what with all college undergraduates receiving an economics education in Keynesianism and nothing but, no wonder government intervention is thought to be the cure for what ails the punk economy. Of course the fact is that the current funk is the result of Keynesian policies, and more of it will just prolong the downturn.

But it wasn't so long ago that Keynes was out of favor. Back in 1983, the hundredth anniversary of Keynes's birth, Forbes magazine declared that it was not Keynes who knew the way, but another economist who shared the same birth year as Keynes — Joseph Schumpeter. Instead of the government intervention that Keynesians demand to prop up the economy and failed businesses of all types, Schumpeter believed that capitalism is driven by entrepreneurs whose innovations replace old worn-out business models in a process he called "creative destruction."

Keynes and Schumpeter were not only contemporaries, but also rivals who had a "distaste for each other's work," according to Harvard business professor Thomas K. McCraw, author of Prophet of Innovation: Joseph Schumpeter and Creative Destruction. And the lives of the two economists couldn't have been more different. As McCraw describes, "Keynes grew up in the cocoon of the English upper middle class." He lived a sheltered life, with a father who was a respected economist at Cambridge University, and a mother who was the mayor of Cambridge. His brother went on to be a well-known surgeon. Keynes attended Eton and then Cambridge, where "his homosexuality was generally accepted as ordinary," McCraw writes.

In contrast, Schumpeter's life was anything but sheltered. Born in Austria, his father died when he was four. And by the time he married Elizabeth Boody (his third wife), he had lived in nine cities and five countries, relocating his household twenty-three times. After starting as an "academic boy wonder," he published books in his twenties, had a brief career as Austria's finance minister in his thirties, had a banking career, and earned a fortune that he subsequently lost in the stock-market crash. Returning to academics, he moved to the United States and taught at Harvard. But while he was world famous, Schumpeter was also penniless.

McCraw's very readable account doesn't focus on Schumpeter's economic theories, but instead on the man and his tumultuous life, which included what the author describes as "the bumbling FBI's investigation of [Schumpeter] and Elizabeth about the Office of Production Management's rejection of her services." Despite the many tragedies he endured, Schumpeter "always behaved in public like a Continental bon vivant," McCaw recounts. He wore expensive tailored clothes and confessed that it took him an hour to dress. He loved women and women loved him back. In the author's view, Schumpeter was constantly being saved by the women who loved him, putting "his well-being above their own."

Schumpeter told many that he aspired to be the greatest economist, lover, and horseman in the world — but then would add that he was having trouble with the horses. Although he was of Austrian descent and was a student of Eugen von Böhm-Bawerk, Schumpeter cannot be considered part of the Austrian School. He never opposed government intervention like his classmate Ludwig von Mises.

But in addition to Schumpeter's contributions in the area of entrepreneurship and innovation, his book History of Economic Analysis — which, if not for the efforts of Elizabeth Boody after his death, would not have seen the light of day — exposed Adam Smith as unoriginal and praised Turgot as the 18th century's greatest economist instead.

Innovation is what raises living standards over time. Businesses that don't innovate will fail, and it is competition that drives that innovation. Businesspeople are, "in a situation that is sure to change presently," McCraw quotes Schumpeter from Capitalism, Socialism and Democracy, "standing on ground that is crumbling beneath their feet." But the busts that inevitably follow a central-bank-liquidity-induced boom must be allowed to liquidate unprofitable enterprises and outmoded business strategies as a windstorm fells rotted trees, clearing the way for new growth.

With the world economies currently experiencing a wicked downdraft that is correcting the malinvestments of the past decade, the new crop of Keynesians are stumping loudly for reflation. Such was the case in 1933 during the first Great Depression. "Discussions arose in many countries about public inflationary measures as a way to stop price slides," McCraw writes. "Having witnessed Austrian hyperinflation a decade earlier, Schumpeter believed policies of 'reflation' to be a bad idea." Schumpeter shared F.A. Hayek's view that "neither reflation or price stabilization would be effective."

In a speech to the American Economic Association in 1948, Schumpeter told an audience of Keynesians that Keynes was blinded by his ideology of stagnationism: underemployment equilibrium that required government stimulus to be overcome. He went on to remind the audience that the heart of the capitalist process was its endless dynamism, which was the opposite of Keynesian stagnationism.

Schumpeter may not have been the strongest free-market advocate, but he would surely be dismayed by the current worship of Keynesian interventionism, which will ultimately stifle the entrepreneurial genius that drives capitalism and improved living standards.