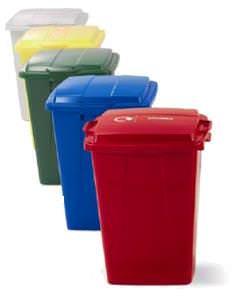 As a Swede I get to hear a lot of the myths of how wonderful a country Sweden supposedly is — the "prosperous socialism" it stands for, a role model for the rest of the world. For instance, quite a few friends from around the world have commended me on Swedish recycling polices and the Swedish government's take on coercive environmentalism.

The way it has been presented to me, Sweden has succeeded with what most other governments at best dream about: creating an efficient and profitable national system for saving the environment through large-scale recycling. And the people are all in on it! Everybody's recycling.

The latter is actually true: everybody is recycling. But that is the result of government force, not a voluntary choice. The state's monopolist garbage-collection "service" no longer accepts garbage: they will only collect leftovers and other biodegradables. Any other kind of garbage that accidentally finds its way to your garbage bin can result in a nice little fine (it really isn't that little) and the whole neighborhood could face increased garbage collection rates (i.e., even larger increases than usual — they tend to increase annually or biannually anyway).

So what do you do with your waste? Most homes have a number of trash bins for different kinds of trash: batteries in one; biodegradables in one; wood in one; colored glass in one, other glass in another; aluminum in one, other metals in another; newspapers in one, hard paper in another, and paper that doesn't fit these two categories in a third; and plastic of all sorts in another collection of bins. The materials generally have to be cleaned before thrown away — milk cartons with milk in them cannot be recycled just as metal cans cannot have too much of the paper labels left.

The people of Sweden are thus forced to clean their trash before carefully separating different kinds of materials. This is the future, they say, and it is supposedly good for the environment. (What about the economy?)

But it doesn't end with the extra work at home and the extra space in each and every kitchen occupied by a variety of trash bins. What do you do with the trash that isn't collected? The garbage collection service (which nowadays doesn't offer collection too often, usually biweekly or monthly, even though the rates mysteriously seem to be much higher than before) only accepts certain types of garbage, generally only biodegradable food leftovers. But do not worry; it is all taken care of.

The authorities have established trash collection centers in most neighborhoods where you get to throw away your trash. These "centers" offer numerous containers where you can throw away your trash — there is one container dedicated for each and every kind of trash and they are all neatly color-coded to help you find the right one. But this means you better have separated your aluminum from your other metals and your newspapers from your soft and hard papers before you get here. You wouldn't want to throw away dirty milk cartons or unsorted paper, would you?

But it seems people do just that: they cheat if they believe they are better off doing so. So the authorities have responded by making it more difficult to cheat. Their first measure was to redesign all containers so that it is more difficult throwing the "wrong" trash in them. For instance, containers for glass have only small, round holes where you put your bottles, and containers for hard paper and carton materials have only letter-slit shaped holes (you need to flatten all boxes before recycling — that's the law).

Well, that didn't do the trick. People kept on cheating. And the more difficult the authorities made it to cheat, the more difficult it was to get rid of the trash even if you intended to put it in the right place. So people went to these centers and simply put everything next to the containers instead — why bother? The authorities responded by appointing salaried "trash collection center spies" (!) to document who was cheating so that they could be brought to justice. (There have actually been a few court cases where people have been tried for not following recycling laws.) Need I say the attempt to appoint spies didn't work either? After a rather hot-spirited debate in the media, all spying at trash collection centers was abolished.

But the real question here is not to what degree the authorities are ignorant of what spurs human action. We already have numerous examples of this ignorance being quite huge. The question is: does this recycling structure work? The answer is that, from a government point of view, while it can probably be thought of as working, from an environmental point of view, the answer is definitely "no."

The structure works the way all centrally planned structures work: it increases and centralizes power while the attempted (expected) results do not materialize. In this case, the structure works: people do sort their trash in different bins — they have no choice. Also, government garbage collection companies do not have to do as much work while getting paid more than ever before. People are annoyed, but do not really react. Swedes generally complain a lot (about everything), but they do not resist; they are used to being pushed around by powerful government and have tolerated this fate ever since 1523.

This coercive recycling structure is set up in layers, where the consumer ("producer" of waste) gets to do most of the work of sorting, cleaning, and transporting the trash to collection centers. Government-appointed companies then empty the containers and transport the materials to regional centers where the trash is prepared for recycling. And then everything is transported to centralized recycling plants where the materials are prepared for reuse or burning. Finally what is left of the materials is sold to companies and individuals at subsidized prices so that they can make "environmentally friendly" choices.

What is interesting about this Soviet-style planned recycling is that it is officially profitable. It is supposed to be resource efficient, since recycling of the materials is less energy-consuming than, for instance, mining or the production of paper from wood. It is also economically profitable, since the government actually generates revenues from selling recycled materials and products made in the recycling process. The final recycling process costs less than is earned from selling the recycled products.

However, this is common government logic: it is "energy saving" simply because government does not count the time and energy used by nine million people cleaning and sorting their trash. Government authorities and researchers have reached the conclusion that the cost of (a) the water and electricity used for cleaning household trash, (b) transportation from trash collection centers, and (c) the final recycling process is actually less than would be necessary to produce these materials from scratch. Of course, they don't count the literally millions of times people drive to the recycling centers to empty their trash bins; neither do they count, for instance, energy and costs for the extra housing space required for a dozen extra trash bins in every home.

Economically, Swedish recycling is a disaster. Imagine a whole population spending time and money cleaning their garbage and driving it around the neighborhood rather than working or investing in a productive market! According to the government's books, more money flows in than flows out; therefore recycling is profitable. But this ignores the costs of coercion.

The government bookkeepers also take advantage of the cost cuts they have been able to realize through centralizing the garbage collection system. These "cuts," however, are mostly cuts in service, whereas rates for consumers have been increased. A recent problem with the garbage-collection centers is that the containers aren't emptied very often (a typical example of government "savings") and thus remain full, which means that people's garbage piles up next to the overflowing containers while the government contractors sit idle: they are only paid to empty the containers on schedule, not to pick up the trash sitting next to these containers. The result? Disease and rats. Newspapers have been reporting on a "rat invasion" in Stockholm and in other Swedish cities in recent years.

If we consider the costs in monetary terms, in terms of wasted time, and in terms of increased emissions from automobiles, this is hardly environmentally friendly. Adding the annoyance and the increased risk for disease, Swedish recycling is at least as disastrous as any other government scheme.

This should be expected, since the system is so authoritarian in style, structure, and management. It might be more "high-tech" and advanced than the Soviet systems ever were, but it is still a system founded on command rather than voluntary choice based on interest or incentive. Interestingly enough, the system is too socialist even for Sweden's number one socialist newspaper, Aftonbladet. In an op-ed on January 4, 2002, Lena Askling wrote on the public garbage collection system:

We [consumers] are supposed to sort, compost, parcel, store, and transport the trash. We are supposed to keep on with this cockamamie of storing compost garbage in small containers in apartments and villas and then transport the stinking, leaking trash to dedicated bins or collection centers, which seem to always be brim-full.

Why in the name of the Lord cannot the government introduce "market incentives" to stimulate industry and producers to develop rational packaging and garbage disposal systems enabling recycling, energy production and future import revenue? And perhaps a consumer friendly and hygienically acceptable system instead of the current trash and filth chaos?

While I'm waiting, mice are scurrying around in my garbage compartment.

Even Askling, who writes socialist propaganda for a living, knows the Swedish recycling scheme doesn't work; and she concludes it is in need of more market.

Please enlighten me, wherein lies the so-often-acclaimed success of this system?