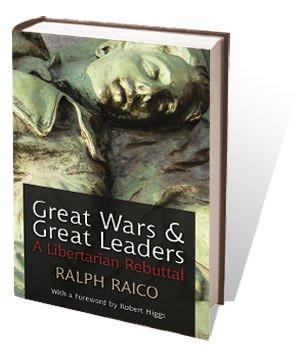 [Foreword to Great Wars and Great Leaders by Ralph Raico (2010)]

For many years, I have described Ralph Raico as "my favorite historian." When David Theroux and I were making our plans in 1995 for the publication of a new scholarly quarterly, The Independent Review, and selecting the scholars we would ask to serve as associate editors, I knew that I would want one of them to be an excellent historian, and I knew also that the person I wanted most was Raico. I had complete confidence that he would bring to our project precisely the combination of personal integrity, scholarly mastery, and sound judgment I needed in an associate. In the 15 years since then, I have never regretted that I prevailed on Ralph to serve in this capacity and that he graciously accepted my invitation. Three of the marvelous review essays that appear here were first published in TIR.

Much earlier I had developed a deep respect for Raico as a scholar and as a person. I insist that these two qualities cannot be separated without dire consequences. Some scholars have energy, brilliance, and mastery of their fields, but they lack personal integrity; hence they bend easily before the winds of professional fashion and social pressure. I have always admired Ralph's amazing command of the wide-ranging literature related to the topics about which he lectures and writes. But I have admired even more his courageous capacity for frankly evaluating the actors and the actions in question, not to mention the clarity and wit of his humane, levelheaded judgments.

Academic historians, who long ago came to dominate the writing of serious history in the United States, have not distinguished themselves as independent thinkers. All too often, especially in the past 30 or 40 years, they have surrendered their judgments and even their attention spans to a combination of hypersensitive multiculturalism and power worship. They tend to see society as divided between a small group of oppressors (nearly all of whom are, not coincidentally, straight white males engaged in or closely associated with corporate business) and a conglomeration of oppressed groups, among whom nonwhites, women, homosexuals, and low-wage workers receive prominent attention and solicitude.

When the historians write about the economy, they usually view it through quasi-Marxist lenses, perceiving that investors and employers have been (and remain) the natural enemies of the workers, who would never have escaped destitution except for the heroic struggles waged on their behalf by labor unions and progressive politicians. When they write about international affairs, they elevate the "democratic" wartime leaders to godlike status, especially so for Abraham Lincoln, Woodrow Wilson, Winston Churchill, and Franklin D. Roosevelt — politicians whose public declarations of noble intentions the historians tend to accept at face value.

"Many historians have known these facts, but few have been willing to step forward."

Raico, in contrast, steadfastly refuses to be sucked into this ideological mire. Having attended Ludwig von Mises's famous seminar at New York University and having completed his PhD dissertation at the University of Chicago under F.A. Hayek's supervision, he understands classical liberalism as well as anyone, and his historical judgments reflect this more solid and humane grounding. For Ralph, it would be not only unseemly but foolish to quiver obsequiously in the historical presence of a Churchill, a Roosevelt, or a Truman.

He knows when he has encountered a politician who lusted after power and public adulation, and he describes the man accordingly. He does not sweep under the rug the crimes committed by the most publicly revered Western political leaders. If they ordered or acceded to the commission of mass murder, he tells us, without mincing words, that they did so. The idea that the United States has invariably played the role of savior or "good guy" in its international relations Raico recognizes as state propaganda rather than honest history.

Thus, in these pages, you will find descriptions and accounts of World War I, of the lead-up to formal US belligerence in World War II, and of Churchill, Roosevelt, and Truman, among others, that bear little resemblance to what you were taught in school. Here you will encounter, perhaps for the first time, compelling evidence of how the British maneuvered US leaders and tricked the American people prior to the US declarations of war in 1917 and 1941. You will read about how the British undertook to starve the Germans — men, women, and children alike — not only during World War I, but for the greater part of a year after the armistice. You will be presented with descriptions of how the communists were deified and the German people demonized by historians and others who ought to have known better. You will see painted in truer shades a portrait of the epic confrontation between the great majority of Americans, who wished to keep their country at peace in 1939, 1940, and 1941, and the well-placed, unscrupulous minority who sought to plunge the United States into the European maelstrom.

Raico's historical essays are not for the faint of heart nor for those whose loyalty to the US or British state outweighs their devotion to truth and humanity. Yet Ralph did not invent the ugly facts he recounts here, as his ample documentation attests. Indeed, many historians have known these facts, but few have been willing to step forward and defy politically popular and professionally fashionable views in the forthright, pull-no-punches way that Raico does.

"In these pages, you will find descriptions and accounts of Churchill, Roosevelt, and Truman that bear little resemblance to what you were taught in school."

The historians' principal defect for the most part has not been a failure or refusal to dig out the relevant facts but rather a tendency to go along to get along in academia and "respectable" society, a sphere in which individual honesty and courage generally count against a writer or teacher, whereas capitulation to trendy nonsense often brings great rewards and professional acclaim.

Those who have not read Raico's essays or listened to his lectures have a feast in store here. Those who have read some, but not all, of the essays in this collection may rest assured that the quality remains high throughout the volume. Any one of the main essays well justifies the price of the book, and each of the review essays is a jewel of solid scholarship and excellent judgment. Moreover, in contrast to the bland, uninspired writing that most academic historians dish out, Ralph's clear, vigorous prose serves as a tasty spice for the meaty substance. Bon appétit.

This article was originally published as the foreword to Great Wars and Great Leaders by Ralph Raico (2010).