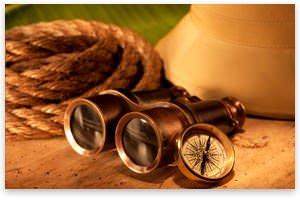 To the minds of most environmentalists, the ham-hand of government is needed to protect wildlife. Private property be damned — the government must step in, otherwise every species on the planet will be hunted into oblivion, or human development will gobble up all remaining wildlife habitat, leading to the complete extinction of all species.

However, on the African plain it's just the opposite. From the van leaving Hoedspruit airport to the Thornybush Game Preserve, we saw nothing but mile after mile of African savannah, enclosed in electrified fencing (and at one point an ape bounding across the road). Although government-owned Kruger National Park is nearby, the area is dominated by private game reserves, with ecotourism being the primary driver of the local economy.

If not for these private game reserves, a number of species would be extinct. Because people like the four in our party are willing to pay to see the "Big Five" and so much more, the populations of a number of these animals are thriving.

The game-reserve experience, while a good deal dependent on serendipity, is in the hands of human expertise and experience. The Thornybush accommodations, meals, and service are first class. But you go for the game: the experience of a lifetime, seeing animals up close, in the wild, that you've only seen before in picture books or cooped up in zoos.

Arriving in the afternoon, our first safari would begin with refreshments in the late afternoon. As I sipped on lemonade, an unassuming young Afrikaner approached me by name, introducing himself as Werner (pronounced "Verner"). Werner would be our game ranger for our four safaris.

To the uninitiated, the game ranger might appear merely to be the driver of the vehicle, carrying up to ten guests plus a tracker perched precariously on the front of the hood. And that would be impressive enough, negotiating the labyrinth of winding dirt roads that weave through the 11,000-hectare reserve. The roads are narrow, deeply rutted, and in some cases close to nonexistent, as a 36-hour downpour of 17 inches a couple weeks prior to our arrival made many roads next to impassable.

But in addition to his driving skills, Werner offered an encyclopedic knowledge of the Thornybush flora and fauna. Not just names but mating habits, gestation periods, digestion, and who-knows-what-all about the 147 mammals, 114 reptiles, 507 birds, 49 fish, 34 amphibians, 970 grasses, and 336 tree species that inhabit the private reserve.

Werner introduced us to Orlando, our tracker and Werner's partner in making our experience unforgettable. Orlando hails from a nearby village where he returns for two weeks to be with his family after working six straight weeks.

As he loaded a Winchester .375 rifle, Werner warned us that the animals are dangerous, and he cautioned us not to stand up in or extend our arms out of the side of the vehicle.

Werner was in constant communication on his radio with other rangers and at the same time having a running dialogue with Orlando in Fanigalore, a Bantu/English hybrid language used in South Africa's mines, allowing workers from various parts of Africa to communicate.

While sightings of impala and wildebeests are common, the Big Five are more elusive, so the game rangers stay in constant radio contact to tip each other off to a sighting or fresh tracks. Rangers are only allowed to leave the road to track one of the Big Five.

During our first evening, what we encountered most was the golden orb spider, which takes a week to spin an elaborate web from brush to brush across a road. The golden orb, Werner assured us, is harmless, but the prospect of a face full of their sticky web and having the spiders crawling on us in the evening dusk was less than appealing.

We would see both black and white rhinos during our safaris, huge lumbering beasts that sport horns prized in China and Vietnam for medicinal purposes. According to the BBC, "The black market price of rhino horn is now in the region of £35,000 ($55,000) per kg."

South Africa is home to 70 to 80 percent of the global rhino population, and with the rhino-horn trade being a multibillion-dollar-a-year business, last year 450 rhinos were killed by poachers in South Africa.

Private game reserves do all they can to ward off poachers. After all, rhinos, as members of the Big Five, are rare and expensive to replace. But at government-owned Kruger National Park, four park employees were recently arrested for being accomplices in a rhino-poaching operation.

"I am personally saddened to discover that some of our own would so callously abuse the confidence and faith that we have entrusted upon them," says Sanparks head David Mabunda.

Mr. Mabunda may be sad, but as Walter Block makes clear, "Like public servants the world over, these may be well-meaning people, but they have no real monetary incentive to perpetuate the species."1

Professor Block points out that governments are inept at stopping poachers, and low-level government workers are susceptible to bribes and corruption.

The legalization of rhino-horn sales is actually being discussed in South Africa, but environmental groups like the World Wildlife Fund (WWF) are vehemently opposed to the idea. "We understand the need to come up with new ways of combating the rhino horn trade but we are against the notion that legalising it is the answer," said Morne du Plessis, of WWF in South Africa.

"How can we control legal rhino horn trade when we can't even control illegal trade. There are too many unknowns for us to even start thinking in that direction," Mr. du Plessis said.

This is not a new debate. Dr. Block wrote over 20 years ago that countries inhabited by rhinos make it close to impossible for farmers to domesticate rhinos for profit. Instead, there continue to be "only bureaucrats intoning platitudes about the importance of refraining from hunting the beasts."2

Commercialize the rhino trade, and rhino farms would pop up — and at the same time the rhino supply would flourish. For instance, 60 Minutes reported recently that many African species are thriving on private hunting lodges in Texas.

The game reserve is not a place to sleep in. Everyone receives a 5 a.m. wake-up call, and the game rangers like to start their morning safaris by 5:30. The February morning air had the perfect amount of crispness as we anticipated more Big Five sightings.

Very near Thornybush's main lodge is an airstrip, and first thing, we spotted two lionesses lounging near the pavement enjoying the cool morning air. Werner pulled our vehicle very close to the lions, but they only yawned, showing little concern or interest.

We would actually see the entire Big Five during our two safaris that day: lion, African Cape buffalo, African elephant, rhino, and leopard (the shyest). The phrase refers to the five most difficult animals to hunt on foot.

The big, powerful animals seem tame around the vehicles, but they are still wild and unpredictable. If we forgot this was dangerous country, the eight-foot black mamba slithering across the road snapped us out of it. It's the longest, fastest venomous snake in the world — and aggressive to boot. Also, each night after dinner, a member of the Thornybush staff would walk us to our cabins, as unaccompanied guests at game reserves have fallen prey to leopards.

Werner and Orlando had managed to show us most everything we could expect on a camera safari. Plus, when a member of our party posed astronomical questions as we rolled toward the lodge under a blanket of stars, Werner stopped the vehicle, pulled out a laser pointer and turned into Galileo.

We still had one safari left and hadn't seen a male lion. We told Werner and Orlando that their job was to find the king of the jungle. It didn't happen quickly, and unlike the other three outings we seemed to go in circles. We came upon a couple of lazy white rhinos. Interesting, but not lions. Giraffes. Ho-hum.

Werner and his partner were taking the lion instruction seriously. Our game ranger was clued into a sighting of tracks by another vehicle and Orlando seemed sure a lion was nearby.

Orlando had Werner stop, and he jumped off the vehicle to walk into the bush. Then we heard it — like sitting in the front row at the start of an MGM movie! Orlando wheeled, ran toward the vehicle, and jumped on to his seat. Werner started into the brush toward the roar.

Three lionesses and a male were looking expectantly up a tree. In the tree, a leopard with a fresh baby impala kill (see photo). Leopards and lions may be cats, but they aren't friendly. They're fierce competitors, and the leopard was at a distinct disadvantage.

Werner thought the leopard might wait the lions out. Lions don't climb easily. But the leopard became nervous; whether it was the lions or our vehicle is unsure. The leopard suddenly leaped down from the tree — 15 to 20 feet — and ran for the tree in front of our vehicle, with the lions in hot pursuit. We were stunned. Werner quickly backed up.

Again the leopard jumped down and ran up another tree just escaping the lions. Werner was concerned that we were putting the leopard in danger. He pulled the vehicle around near the tree where the leopard had left the dead impala draped over a branch.

Soon the lionesses came back, and one ventured to climb and retrieve the kill. The 300-pound cat made it up the main trunk, claws gouging the tree's bark. Then things got tricky. The impala was hanging just out of the lion's reach. The cat carefully adjusted its weight, trying to balance on a limb that allowed enough stability to reach up and grab the impala.

Finally, the impala was secure in the lioness's jaws. But now the hard part. While leopards have a locking wrist or anklebone that aids in climbing and descending, lions' ankles slide sideways under their body weight.

Meanwhile, the two other lionesses waited calmly under the tree, hoping to scoop up a falling impala. But the lioness held on, clumsily sliding down the tree trunk. With the kill secure and now on terra firma, the lioness carried the impala into the shade of a bush. The king of the jungle quickly showed up to join her.

It's the prospect of witnessing this kind of drama that tourists pay money to see, and it's the market and private property that make it possible, at the same time providing the incentives to protect and revitalize what were once endangered species. As professor Block makes clear, "there is no intrinsic conflict between the market and the environment."

Government's good intentions have done little to protect endangered wildlife. It is only private property and market pricing that will protect these majestic creatures for future generations to marvel at and enjoy.