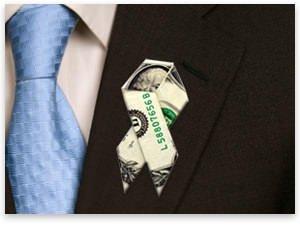 Back in 1997 Gregory Bresiger penned a piece for the Free Market tearing apart the notion of "socially responsible investing" (SRI). Managers focused on social issues instead of profits will perform poorly as resources are diverted to unproductive uses. Bresiger looked to close the argument with this seemingly absurd proposition:

But SRI funds do point the way to solving a myriad of political debates in this country. Whenever a politician suggests a new tax, mandate, or regulation on business, let's first try it out on one of these "Socially Responsible" companies, purely on a voluntary basis. Let it pay higher taxes, insurance premiums, and wages, while adopting ever more rigid quotas and union rules. Then we can watch what happens to its stock price relative to everyone else's. Any takers?

More than a decade later there are takers. The Wall Street Journal reports that in seven states companies can register as benefit corporations, allowing the firms to pursue social and environmental goals without the worry of shareholders suing them for not maximizing shareholder value.

These corporate charters aren't tax exempt or nonprofit. Companies choosing to be benefit corporations pay Uncle Sam like any other for-profit company, but have the prerogative to make profits an afterthought.

Casey Sheahan, chief executive of outdoor-apparel company Patagonia Inc., changed his company's charter right away, believing that his company's shareholder value should take a backseat to the common good.

Jeff Furman, a Ben & Jerry's director since the 1980s and its current chairman, told the WSJ that had the socially conscious ice-cream maker been a benefit corporation back in 2000, they would have never sold out to Unilever PLC.

Ben Cohen and Jerry Greenfield are the stuff of legend for turning an initial $12,000 investment in an ice-cream store, located in a renovated gas station, into an ice-cream juggernaut the two sold 22 years later for over $300 million.

In addition to the cash price, Cohen and Greenfield negotiated to have the Netherlands conglomerate commit 7.5 percent of Ben & Jerry's profits to a foundation, agree not to reduce jobs or alter the way the ice cream is made, and also contribute $5 million to the Ben & Jerry's foundation, along with creating a $5 million fund to help minority-owned businesses and others in poor neighborhoods, and distribute $5 million to employees six months after the merger.

Surely Unilever would have paid an even higher cash price without all the social responsibility stipulations, which Unilever must have factored into its bid. As it is, based on Furman's comments, the Ben & Jerry's folks still harbor seller's remorse.

The law requires benefit corporations to spell out company social and environmental goals each year in a "benefit report" and then measure progress toward those goals. Of course progress toward goals that are impossible to quantify will be impossible to evaluate, providing a convenient cover for underperforming management. Shareholders will have no real basis to judge management, who by choosing this type of charter are saying, "we don't care about financial profits; we want to make the world a better place."

It is customers who are in command of the profit-and-loss system. Producers who don't serve the buying public best suffer losses and are replaced by those who do. Ludwig von Mises explained that it is the urgent demands of customers that dictate the adjustment of production activities. These adjustments relentlessly continue, driven not by the ideology of the entrepreneur or the opinions of management but by the customer. As Mises explains in Profit and Loss,

Profit and loss are ever-present features only on account of the fact that ceaseless change in the economic data makes again and again new discrepancies, and consequently the need for new adjustments originates.

The idea at the root of benefit corporations is that profit should be abolished. But the results of that would be disastrous. Mises points out that if profits were given to the customers (or, in other words, if prices could not exceed costs), this maximum-price decree would paralyze markets and require goods to be rationed.

For the firm's employees to receive profits, no capital could be accumulated to grow the business or innovate production functions. And finally if the state were to tax 100 percent of profits, customers would no longer be supreme and producers "would just be people who have the power to deal with production as it pleases them."

Murray Rothbard explained in Man, Economy, and State, the aim of any action is to make gains that exceed the costs derived from that action, but that profit and loss in this sense are "psychic phenomena and as such not open to measurement and a mode of expression which could convey to other people precise information concerning their intensity."

For instance, environmentally conscious CEOs can try explaining to shareholders that using more expensive materials or processes to create goods is beneficial to the earth and thus more worthy than using less environmentally friendly but less expensive materials and earning a higher profit, but the net benefit is impossible to measure. The CEO and board are merely asking shareholders to subsidize their worldview.

Rothbard explains that financial profit and loss are expressed in a certain amount of money that determines what individual enterprises made or lost.

Mike Brady, the president of Greyston Bakery, a Yonkers, New York, supplier of brownies to Ben & Jerry's, claims benefit corporations "add another level of accountability and transparency." But it's hard to understand how directing resources to unprofitable ends at the expense of customers accomplishes this.

Mr. Brady's bakery has 50 full-time employees and hires from its local, underprivileged neighborhood. This is fine if these employees are the best employees he can find for the wage he's paying, but if they are not, he is wasting capital that could be used to improve production that could drive down costs, benefiting his customers with lower prices.

A free society cannot survive without entrepreneurial action as well as entrepreneurial profit and loss. Entrepreneurs adopting benefit corporation charters may be well-intentioned, but they should heed the words of Mises:

The elimination of profit, whatever methods may be resorted to for its execution, must transform society into a senseless jumble. It would create poverty for all.