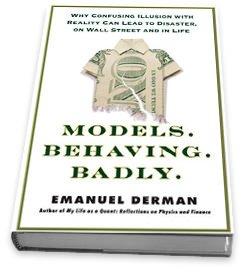 In a new book titled Models. Behaving. Badly: Why Confusing Illusion with Reality Can Lead to Disaster, on Wall Street and in Life, physicist Emanuel Derman argues that today's economists are relying too heavily on quantitative models, leading to some disastrous results. The relation that economics as a discipline bears to mathematics or physics, Derman contends, is not as close as the prevailing mainstream would have us believe, preoccupied as it is with intricate metrics and charts.

Derman cites Friedrich Hayek for the proposition that the economic establishment actually has things precisely backwards, incorrectly treating the macroscopic economy as less abstract than the acting agents who make it up. "If the correct way to proceed is from concrete to abstract," then it is the Austrian methodology, praxeology, that approaches economic questions aright. Murray Rothbard often observed this distinction between economics and, for instance, physics. In Praxeology as the Method of the Social Sciences, he noted that "the economist is in the opposite position" from that of the physicist, that the former may proceed deductively from axiomatic premises that can be known with certainty. The approach or methodology of the Austrian School thus proves to be among its distinctive, defining characteristics, central to its superiority over neoclassical systems.

The mistake of the positivistic, empirical method is decidedly not that it overemphasizes the importance of concrete aspects of physical reality, but rather that it vastly overestimates the inferences about reality that can be drawn from discrete data sets. It is true enough that studies and statistics, situated within a proper context, are capable of revealing or throwing into relief general principles and truths. Too often, however, there is flagrant oversight with respect to that more general and universal context, disposing economists to make far too much of the empirical data on hand. Building predictions based on these piecemeal, incomplete data — representing at best snapshots or fragments of the unbounded totality of economic relationships — is a parlous venture, culminating in the kinds of economic crises we observe today.

For all of its appeals to "hard science" and observation, the empiricism of mainstream economics ultimately appears more like junk science, its conclusions far outpacing the facts. As Murray Rothbard shrewdly explained, linking the Austrian methodology to "the method of most of the older classical economists," "there cannot be controlled experiments when we confront the real world of human activity." At any given time, then, the conclusions that may be gleaned from real-world figures must be significantly qualified by any and all information that hasn't been accounted for — and that happens to be vast.

In an earlier time, before economics coalesced into a distinct academic field of study, with its own separate canons and doctrines, it emerged as part of the tradition of political and moral philosophy. It would not necessarily have occurred to classicists like Adam Smith and David Ricardo that they were "economists" — indeed, that they were anything other than moral philosophers, treating broad questions of social theory. While the deductive method was of course fully embraced and perfected later, after Menger's founding of the Austrian School, the classical theorists laid much of the necessary foundation for praxeology proper. Among the tasks remaining was to entirely sever economics from the error — characterized by the words of Vilfredo Pareto — that "we [can] hold nothing as final or absolute," that all economists can properly undertake is the testing of hypotheses against real-world experiment. It is no coincidence that the Austrian School was born of an intellectual tradition that wove legal education tightly into the training of economists. Adopting a broadly humanistic approach, Austrian universities in the years before the rise of Austrian economics coached students "above all in analytical thinking, linguistic precision, and logic." [1] This contrasted sharply with the training of economists at German universities, where coursework "was based on a predominantly descriptive-empirical approach … closely associated, both institutionally and methodologically, with the natural sciences." [2]

Through their instruction and background, economists in Austria were already inclined to appreciate the ability of pure reasoning, independent from observation and the review of data, to unveil economic principles. Indeed, Menger's groundbreaking insight was that the experiential approach, driven by a fixation on conclusive testing, served more often to obscure underlying truths than to reveal them. In a noteworthy passage in his Investigations into the Method of the Social Sciences, Menger cogently drew upon an analogy to demonstrate the fallacy inhering in the overly empirical method. The desire to subject theory to templates provided by existing, material economic phenomena — to hypothesize and then test — would be akin to a "mathematician who wants to correct the principles of geometry by measuring real objects." Menger's was the argument Rothbard's echoed when he noted the practical impossibility of a control group that could satisfy the implied demands of the experimentalists. Given what the current aggrandizement of economic positivism presupposes about the relationship between observable reality and knowledge, it is interesting that it is praxeology that is thought to romanticize mere theoretics at the expense of "hard science." All economic facts that we gather must be analyzed within some framework of theory. [3] It is the atrophy of contemporary economic sciences that theory and the deductive approach have been all but discarded as quackery, even while the models of the establishment fail all around us.

Few would have the temerity to suggest to an academic logician that the use of deductive reasoning is somehow unscientific, yet that is the assumption embedded in many of the most common criticisms of praxeology. The praxeological method, contrary to the claims of its critiques, actually entails a more measured, cautious approach to the question of what we can really know about economics, making assertions only within a narrowly delimited area. As philosopher Roderick Long noted in a defense of praxeology, its conclusions attempt to predict only "how people will behave so long as they are buying and selling." Long further explains that, as "an abstract structure, like mathematics," praxeology furnishes the prism through which factual data must be evaluated; it doesn't attempt to replace empirical findings, but instead equips the economist with the tools necessary for engaging in another layer of analysis altogether.

For students of logic, the likening of praxeology to mathematics will appear intuitive enough. Logicians employ symbols to represent arguments and their component parts, yielding results that appear very similar to mathematical proofs or formulas. The philosopher Gottlob Frege — whose work may have informed Mises's ideas about the constancy of logic across languages and cultures [4] — wrote of mathematics' "close connexion with logic" that he "agree[d] with those who hold that it is impossible to effect any sharp separation of the two."

The efforts of today's court economists, forever enjoining still more state intervention in economic life, to abstract data away from any conceptual context are perfectly consistent with "the fatal conceit" Hayek warned of. There is a singular arrogance immanent in the notion that the right data (of course culled and interpreted by the right technocrats) is all that is necessary to properly modulate the economy through public policy. It should therefore come as no surprise that the advocates of totalitarian societal planning favor empiricism in economics; it ends up providing the rationales and justifications for what Hayek labeled "Cartesian constructivism," the idea that society and its institutions should or must be deliberately and purposively plotted, as against simply emerging from the interactions of free people. To the totalitarian mind, the idea that anything rational or valuable to society as a whole could materialize absent a deliberate design is as laughable as the idea that economics ought to be examined using axiomatic principles that can be known a priori.

By now the failures of establishment economic theories have effectively reiterated the old truth that numbers, like words, can be made to say anything; statistics can be made to lie. For all of the empiricists' supposed faithfulness to the scientific method, it has been the Austrian methodology that has produced the most accurate predictions, that has grasped the true nature of the economic malady that is blighting the world today. As champions of praxeology, we must continue to ventilate its practical applications to contemporary problems, demonstrating that Mises's apriorism is not supernatural or unscientific, but firmly grounded in reason and principle.

Professional economists' certainty with regard to models crafted out of fragmentary data is misguided and has hastened the expansion of the total state. The methodological individualism of praxeology is the sound alternative to the shallow nostrums of the willing shills of the state. As Mises himself wrote, "It is no longer enough to deal with the economic problems within the traditional framework. It is necessary to build the theory of catallactics upon the solid foundation of a general theory of human action, praxeology."

[3] Karen I. Vaughn, Austrian Economics in America: The Migration of a Tradition (Cambridge University Press 1994).