GET NEWS AND ARTICLES IN YOUR INBOXPrint
A
A
Home | Mises Library | Power and Market: A Review

Power and Market: A Review 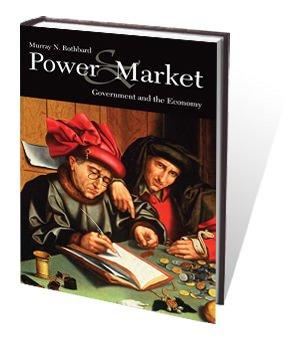 Coercive intervention into economic affairs is economically detrimental, no matter the circumstances. This is the thesis of Murray Rothbard's Power and Market, an exhaustive and systematic analysis of all forms of economic intervention. Written to elucidate the effects of government intervention in the economy, the book is bold and as accessible as it is scholarly. Though written in 1970, the principles of the market economy described in this book are valid for all time, and are not framed solely in the context of the modern American political system. In Power and Market, Rothbard systematically refutes any alleged justification for government intervention into economic affairs, proving that a moral opposition to intervention is a matter of principle — not situational prudence.

Championing the totally free market, Rothbard, a prominent 20th-century economist and ardent intellectual enemy of the state, leaves his reader hard-pressed to discover any logical fallacies with his argumentation or to develop any substantial counterarguments to his seemingly radical but hitherto indestructible scrutiny of the distortionary and often self-defeating effects of coercive economic intervention. Neither is his analysis overtly confrontational. While the implications of his conclusions — that any and all forms of economic intervention are injurious and rarely, if ever, achieve their stated goals — are very different from prevalent beliefs today about the uses of economic intervention, Rothbard is frank and matter-of-fact in describing the effects of various types of intervention, and takes a strictly scientific approach to the topic.

Rothbard understands government intervention as a distortion of the natural economic order, whereby all men are free to contract with all others. But Rothbard's personal views are not manifested in Power and Market by way of partisan or lopsided political rhetoric. Rather, his analysis of the effects of economic intervention is strictly academic and consistent with the charge of professional economists to remain wertfrei, or value neutral, while elucidating economic truth. Where Rothbard does criticize impure laissez-faireists and proponents of government intervention, it is not without a strong defense of his own views and a careful dissection of exactly where interventionist policies go awry. His opponents are thus painted as wrong by implication of his economic analysis and not by his assumptions about their unspoken motives or their being of a different intellectual background or political persuasion.

The book begins somewhat awkwardly with an illustration of defense services on the free market. Rothbard posits that in the free market no invasion of property takes place because everyone voluntarily refrains from such aggression or because what methods of forcible defense exist are sufficient to prevent such aggression. It follows that it is a fallacy to believe the free market is inherently incapable of supplying defense services. According to Rothbard, laissez-faireists — while claiming to support the free market — erroneously assume that there must be one single, uniform code of law to uphold contracts, and subsequently one powerful institution to uphold it. It follows, then, that they assume defense services must be large and uniform, and that a state is the only institution capable of providing such a service.

Rothbard proves this is false by uncovering what a free-market defense system might look like. While he admits that it is impossible to blueprint the exact conditions of any future market, it is not futile to prove the possible existence of a future market through reasoned speculation. The picture of free-market defense that follows is detailed and convincing. To sum it up, Rothbard writes,

A supply of defense services on the free market would mean maintaining the axiom of the free society, namely, that there be no use of physical force except in defense against those using force to invade person or property. (p. 2)

Defense, then, would be obtained like any other service: through contract and the laws of supply and demand. There is no justification for a government monopoly on defense.

As stated above, beginning the book with a discussion of defense on the free market is awkward. But only after reading the entire book does any possible reason come to mind as to why Rothbard opens his book in this manner: the inability of the free market to give rise to adequate defense services against invaders of property is a common belief among critics of the market, and allowing this erroneous belief to go unaddressed before Rothbard begins his analysis and deconstruction of all advocacy of economic intervention may prevent apprehensive readers from adopting his views. If not for this, the order of Rothbard's discussion could very well be a matter of random chance.

From here, Rothbard progresses to discuss the fundamentals of economic intervention. He posits that intervention into economic affairs can take three forms. The first he calls autistic intervention (p. 12). This occurs when an intervener (that is, "one who intervenes violently in free social or market relations") commands an individual to take or not take certain actions, even when such actions involve only the affected individual's person or property. Such intervention exists today in the form of homicide, assault, and compulsory enforcement or prohibition of any salute, speech, or religious observance.

The second form he calls binary intervention (p. 13). This involves a coerced "exchange" between the intervener and the subject, such as the various forms of taxation, government subsidies for select private firms, conscription, and compulsory jury service.

The third form is triangular intervention (p. 13), in which the intervener compels or prohibits two individuals or firms from freely contracting with one another. Such intervention exists today in the form of price controls, drug-trade prohibition, and grants of monopolistic privilege.

it is impossible in the space of this volume to trace all the effects of every one of the almost infinite number of possible varieties of intervention … it must be remembered that acts of binary intervention have definite triangular repercussions. (p. 14)

And while Rothbard does not confine his discussion of intervention to government intervention (he refers to homicide and assault, which do not necessarily involve the state, as forms of economic intervention), it is presumed that government is the most egregious violator of the free market, and that the vast majority of the most oppressive and distortionary interventions come at the hand of state bureaucrats.

Following his exhaustive description of the effects of every type of economic intervention, Rothbard identifies and corrects many common misconceptions about the free market. Among these are the beliefs that monopoly pricing is inevitable in a free market, that government must do what free individuals cannot do, and that free-market advocates assume all human beings are angels. Rothbard's refutation of those who claim that equality is the highest end, and that its incompatibility with the free market renders such a system immoral, is particularly damning.

The claim that a market economy fails to achieve the goals of equality is, according to Rothbard, among the most common ethical criticisms of the market economy. And regardless of whether equality is shown to be attainable under any economic system whatsoever, many maintain the belief that at least some cut in living standards is a fair price to pay for what increase in equality allegedly or possibly arises from them (taxes for the welfare state, for example). But Rothbard notes that the assumption of equality as an attainable and worthy goal in and of itself is anything but self-evident.

Indeed, when scholars call for greater equality among men, they often reject (by implication) two of the basic tenets of praxeology: the diversity of human skills and resources and the disutility of labor.

"If each individual is unique," he writes, "how else can he be made 'equal' to other than by destroying most of what is human in him and reducing human society to the mindless uniformity of the ant heap?"

Equality of the form that many egalitarians and critics of the free market desire is simply incompatible with the nature of mankind.

Perhaps the most important section of Power and Market is the closing chapter ("Economics and Public Policy"). Here, Rothbard defines the parameters of economic science and shows where an economist can and cannot make policy recommendations while simultaneously honoring the charge on professional economists to remain value neutral in their analysis. Breaking this charge, he says, is one of the prime reasons for flawed policy recommendations and bad policy itself. He writes,

Neither can economists legitimately adopt the popular method of maintaining ethical neutrality while pronouncing on policy, that is, taking not their own but the 'community's' values, or those they attribute to the community, and simply advising others how to attain these ends. An ethical judgment is an ethical judgment, no matter how many people make it. (p. 15)

A shallow criticism of this claim might be to point to Rothbard's defense of the free market and call it biased, as it undermines the majority of popular views about economic intervention. But this would be unfounded, as Rothbard's defense of the free market — as stated above — is strictly scientific. His analysis is based on the self-evident first principles of praxeology, and what implications result are not his own manipulations of the data but the natural and predictable implications of the nature of human action and the free market.

To his credit, Rothbard refrains from making any positive policy recommendations or relying on empirical data as evidence for the justifiability of certain types of intervention until after his thorough refutation of the argument for intervention of any form. While the argument from experience can be useful in defending one's principles, experience alone is not enough to prove the validity or superiority of one philosophy over another. There is no such thing as a closed system or equilibrium in economics by which to accurately identify the causal relationships, and thus to rely experience as proof is to assume one's infallibility in identifying causal relationships in a field of inherently uncontrollable variables.

As a means of communicating free-market principles, this book succeeds, but more in an academic sense than as a tool for persuading a popular audience of the irrationality of interventionist policies. While Rothbard's arguments are thorough and compelling, many of the arguments against the unhampered market — as identified in the book — are rooted in emotional concern, perverse morals, or irrational "intuitions" about the nature of the economy and human action. With these sorts of arguments Rothbard deals carefully, but appeals to reason alone. His analysis and critique is entirely based on reason and logical extrapolations from the first principles of praxeology.

Unfortunately, reason tends to be less than effective in persuading a popular audience of the validity of certain claims. And when dealing with economic policy, this tendency is only magnified. The existence of the state provides a means for the wielding of coercive power; for an aspiring or current political ruler to give in to the fact that economic intervention by government is irrefutably harmful undermines what personal gains could be made by that political ruler. Indeed, the facts about intervention, as codified in Power and Market, are damning for the state and all those who wish to use violent coercion to engineer, direct, and alter the lives of their fellow human beings.