GET NEWS AND ARTICLES IN YOUR INBOXPrint
A
A
Home | Mises Library | Politically Impossible? 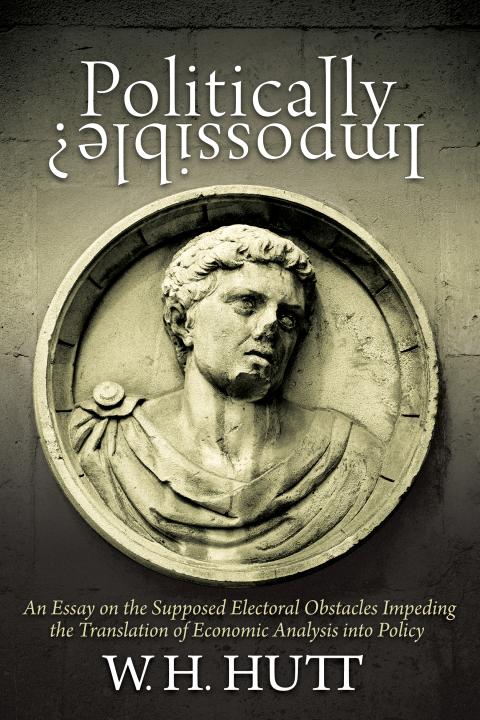 Should economists curb their rhetoric and prescriptions based on “political realities”? Should anyone attempt to conceal the truth about state intervention for fear of not fitting into the existing political culture?

Many people answer yes to both questions, on grounds that taking a hard-core position in favor of freedom threatens to make one “irrelevant” or discredit the message.

W.H. Hutt is one of the few economists who addressed these strategic questions directly. As one of the most eminent economists of the 20th century, and a colleague and friend of Mises’s, he was very qualified to do so. The result is this monograph, which, though long out of print, ought to be considered a classic of economic literature.

He makes the point that the political culture, the culture of public opinion, is no less than the dominant strains of thought and convictions held by the common person. And how are those convictions shaped? They are shaped by the ideas and opinions asserted and argued by intellectual leaders. Particularly on economic questions, it is the economists who shape economic opinion.

If economists are constantly pulling back from stating their convictions, relentlessly withholding their true views, predictably kowtowing to political leaders, public opinion will not change and policy will not change. Professor Hutt regards this tendency as irresponsible. Economists should never excuse their own silence on grounds that their prescription is politically impossible. On the contrary, the more economists tell the truth, the more politically possible freedom becomes.

Hutt applies his point in a wide range of areas: labor unions, inflation and monetary economics, social security, the welfare state, and fiscal planning. In each case, he shows how a forthright telling of the truth is the only way to advance sound economics in the political world. In his view, the principled position is the most practical position too!

Hutt also provides a sweeping and erudite look at the history of thought to see how economists in the past have dealt with the vast gulf that separates economic wisdom from public opinion.

“The virtue in the democratic process is that the masses have the power to change rulers in a peaceful manner so that rule in the interests of a few is prevented,” writes Hutt. "The vice is that, because the masses have not learned how to discern rulers who will legislate for their advantage, governments are today engaged in dissipating their people's heritage. But if I seem to be disparaging the electoral wisdom of 'the masses', I am in effect criticizing the people who create mass opinion, both from within and outside the political arena. It is the persuadable among the editors, the columnists, the television and radio commentators, the academics, the clergy and the teachers generally who must be won over.”

This new edition, the first since 1971, is co-published by the Mises Institute and the Institute of Economic Affairs in London.

Hutt was an economist of the classical tradition who identified himself with the Austrian School. He studied at the London School of Economics and became a professor at the University of Cape Town. He is particularly known for his works "The Factory System of the Early Nineteenth Century" (1925), The Theory of Collective Bargaining (1930), and The Strike-Threat System (1973).

Hutt was an economist of the classical tradition who identified himself with the Austrian School....