The Police State Is Personal 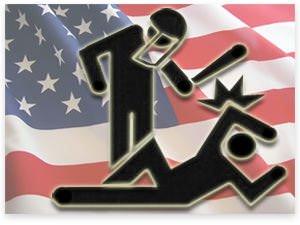 Does America now qualify as a police state? And, if so, where do you — or will you — personally draw a hard line and say, "No! That is a law or a police order I refuse to obey"?

As an anarchist, I view all states as police states, because every law is ultimately backed by police force against the body or property of a scofflaw, however peaceful he may be. I see only a difference of degree, not of kind. But even small differences in the degree of repression can be matters of life or death, and so they should not be trivialized.

A police state is more commonly described as a totalitarian government that exerts extreme social, political, and economic control. It maintains this control by a pervasive surveillance of its own citizenry, by draconian law enforcement, and by granting or withholding "privileges" such the ability to travel. Typically, there is a special police force, such as a Stasi, that operates with no transparency and few restraints. Unlike traditional policemen, who respond to crime, the purpose of such state police is to monitor and control society.

Let me restate my opening question: does America now embody this common description of a police state?

Clearly it does. The American government exerts extreme control over society, down to dictating which foods you may eat. Its economic control borders on the absolute. It politicizes and presides over even the traditional bastion of privacy — the family. Camera and other surveillance of daily life has soared, with the Supreme Court recently expanding the "right" of police to perform warrantless searches. Enforcement is so draconian that the United States has more prisoners per capita than any other nation; and over the last few years, the police have been self-consciously militarizing their procedures and attitudes. Travel, formerly a right, is now a privilege granted by government agents at their whim. Several huge and tyrannical law-enforcement agencies monitor peaceful behavior rather than respond to crime. These agencies operate largely outside the restrictions of the Constitution; for example, the TSA conducts arbitrary searches in violation of Fourth Amendment guarantees.

The Internet would run out of electrons before I could complete a list of the specifics that constitute an emerging Police America. The extent to which you are personally oppressed by the state, however, can be estimated by answering several more abstract questions:

Few people aside from the state apparatchiks can answer in a way that makes them feel anything but economically enslaved and physically trapped.

No one should have to chose between family and the state, nor their wealth and the law. When confronted by such choices, there is no easy or correct answer. An increasing number of Americans are becoming expatriates for their own safety and that of their families. But the great majority of people are rooted in place by extended family, friends, work, inertia, emotional attachments, or other compelling reasons.

Those who recognize the emergence of Police America and yet feel a need to stay should ask themselves a question: where is the limit at which you withdraw your cooperation and say "no!" to a state law or a state agent's order? Would you inform on a neighbor, as the authorities already urge you to do? Would you assist a friend or family member even if it made you criminally an accessory; if so, whom? Would you steal from or harm an innocent person on command? If ordered, would you assist a police officer to do so, or would you interfere and, so, become vulnerable to a charge of "obstructing justice"?

There are several reasons for asking yourself such questions now. They include:

There are no correct answers. The purpose of the exercise is merely to become more aware of how you, personally, could live under a police state while retaining your safety and your self-respect.