GET NEWS AND ARTICLES IN YOUR INBOXPrint
A
A
Home | Mises Library | People, Power, and Profits: Progressive Capitalism for an Age of Discontent

People, Power, and Profits: Progressive Capitalism for an Age of Discontent 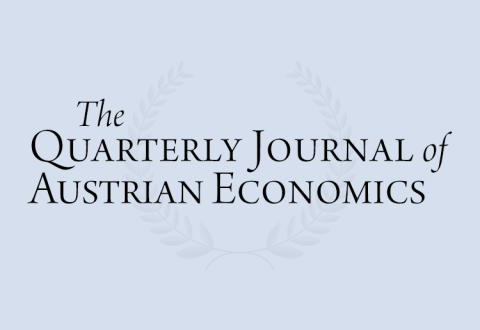 Abstract: Randall Holcombe's new book adds a historical dimension to public choice theory by combining it with "elite theory." In doing this, he arrives at a controversial thesis: a new economic system, "political capitalism," has come to replace market capitalism. Holcombe extends the public choice analysis of government of Buchanan and Tullock, who challenged the standard neoclassical contention that the free market cannot adequately supply public goods and therefore needed to be supplemented by state intervention.

Randall Holcombe is best known as an economist for his work in public choice, but in this impressive new book, he adds a historical dimension to public choice by combining it with “elite theory.” In doing this, he arrives at a controversial thesis: a new economic system, “political capitalism,” has come to replace market capitalism. In arguing for his thesis, Holcombe shows a remarkable knowledge of the literature in economics, political science, and sociology.

By “political capitalism,” Holcombe means the same as what is often called “crony capitalism,” and as he notes, the concept is a well-established one. There is widespread agreement by people with different political views that the American economy is dominated by an alliance of elite business and political interests. David Stockman and Joseph Stiglitz are usually at odds, but not here. Stiglitz argues,

“We have a political system that gives inordinate power to those at the top, and they have used that power not only to limit the extent of redistribution but also to shape the rules of the game in their favor.” Echoing those views, Stockman says... “the state bears an inherent flaw that dwarfs the imperfections purported to afflict the free market, namely that policies undertaken in the name of the public good inexorably become captured by special interests and crony capitalists who appropriate resources from society’s commons for their own private ends.” (p. 5)1

Holcombe contends that political capitalism is a new system, distinct from market capitalism and socialism. The term, he tells us, comes from Max Weber, who used it to “describe the political and economic systems of ancient Rome.” (p. 8). Holcombe applies the concept to contemporary America. “The analysis that follows concludes that political capitalism, in which the political and economic elite control the system for their own benefit, is not market capitalism and should be analyzed as a separate economic system.” (p. ix) It is this thesis that I should like to examine.

He argues for it by extending the public choice analysis of government by James Buchanan and Gordon Tullock ([1962] 1999). These economists challenged, though they did not altogether reject, the standard neoclassical contention that the free market cannot adequately supply public goods and so needed to be supplemented by state intervention. In the standard view, economic actors motivated by self-interest will tend to “free ride,” relying on others to produce public goods. The consequence is an underproduction of them.

Buchanan and Tullock posed a devastating question that weakened the force of the standard view’s policy conclusions, though doing so without challenging the assumptions of the neoclassical model. Why assume that government policymakers are less self-interested than market actors?

Government is not omniscient. Policymakers do not have all the information necessary to allocate resources to match the theoretically optimum welfare maximum. Government is not benevolent. People in government look out for their own interests just as people do in the private sector. Their incentives need to be taken into account to understand how public policy works in the real world. (p. 14)

Buchanan and Tullock rejected theories of group exploitation, but Holcombe does not agree:

Buchanan and Tullock “also reject any theory or conception of the collectivity which embodies the exploitation of a ruled by a ruling class. This includes the Marxist vision, which incorporates the polity as one means through which the economically dominant group imposes its will on the downtrodden.” The public choice approach to analyzing political decision making, as Buchanan and Tullock see it, leaves no room for the group behavior and elite theories that are the subject of this chapter [and book]. (pp. 64–5)

How does Holcombe accept group exploitation theories without rejecting Buchanan and Tullock’s stress on the motivations of individual actors? The key to the mystery lies in the Coase theorem.

This difference in transaction costs permits the continuity over time that elite theory requires. So long as the difference persists, long-lasting dominance by an elite group or class is possible. For example, incumbents in Congress, regardless of party, are often allied against challengers. Owing to the difficulty of ousting them, they can retain power for a substantial period of time.

Those who have political power conspire to keep it, and have more in common with each other than with others in their same party who do not have that power…. The more significant dimension of political competition is between those who with power versus their challengers for that power, not the competition of one party against another. This is true in political capitalism, but also true of government in general. (p. 191)

Holcombe devotes a great deal of attention to the mechanisms of rent-seeking and regulatory capture, by which elites in government join forces to exploit the masses. It is sometimes difficult to tell whether government or business interests dominate the coalition. In one maneuver, the legislature will threaten to pass laws that would adversely affect certain interests, inducing the interested parties to offer “donations” to induce the legislature to turn its attention elsewhere. “Those in government have an incentive to extract payment in exchange for legislative action, or inaction, and those who are paying have an incentive to continue paying to avoid having costs imposed on them.” (p. 129)

Holcombe’s argument within its own terms is powerful, but it suffers from a limitation that the more wide-ranging approach of Murray Rothbard avoids. The public choice school says, in effect, “Politicians are not impartial public servants, aiming for the good of all. They too are self-interested actors.” Everyone’s dominant motivation is to gain wealth, and ideological considerations play a minor role. Why, for example, do incumbents want to remain in power? The primary reason, as Holcombe views the matter, is to extract economic rents.

Rothbard allows far more room to those dominated by ideas, though he also emphasizes people’s economic self-interest. People made the American Revolution, for example, in part because they genuinely believed in the ideals stated in the Declaration of Independence. Lenin genuinely believed in communism: he did not start the October Revolution to make himself a millionaire. It is of course true that both of these revolutions also benefited some at the expense of others.

To this contention, there is a well-known public choice response, best expressed in Gordon Tullock’s The Social Dilemma (1974). Revolutionary action is a public good, and ideological revolutionaries will prefer to free ride on the actions of other revolutionaries, thus avoiding costs to themselves. Even if this analysis is correct, it proves less than Tullock and other exponents of public choice think it does. Tullock has applied the standard neoclassical analysis of public goods to revolutions, but, as previously mentioned, the standard model concludes that a public good will not be supplied efficiently. It does not hold that the good will not be supplied at all. If Tullock is right, perhaps we have less than the efficient quantity of ideological revolutions. But the historical record shows that we have some of them.

Given the malign effects of political capitalism, Holcombe naturally wonders what can be done to restrain it. He says that his book is concerned primarily with an analysis of the system rather than remedial action, but he does suggest that limiting the power of the state through constitutional checks and balances is desirable. Such limits hold some promise to impede a rapacious government. The Progressive movement of the late nineteenth and early twentieth centuries favored government action to limit corporate predation, but this did not work: “The Progressive ideology legitimizes the use of force for the economic benefit of some at the expense of others.” (p. 230) Holcombe’s suggestions are all to the good, and he has written in greater detail with insight and erudition about this topic in From Liberty to Democracy (2002).

Gordon, David, Review of "People, Power, and Profits: Progressive Capitalism for an Age of Discontent," Quarterly Journal of Austrian Economics 22, no. 3 (Fall 2019): 486–91.