Our Corporate Oligarchy and the Road to National Socialism 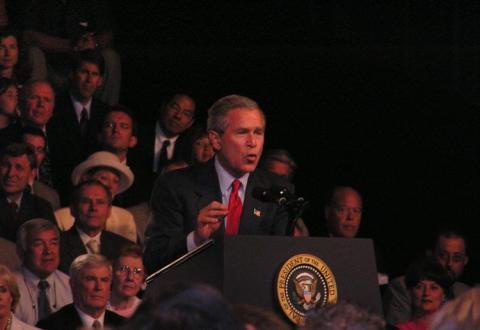 It was common on the Left to intimate that George W. Bush was like Hitler, a remark that would drive the National Review crowd through the roof but which I didn't find entirely outrageous. Bush's main method of governance was to stir up fear of foreign enemies and instigate a kind of nationalist hysteria about the need for waging war and giving up liberty through security.

Hitler is the most famous parallel here, but he is hardly the only one. Many statesmen in world history have used the same tactics, dating back to ancient times. Machiavelli wrote in his Art of War advice to the ruler:

To know how to recognize an opportunity in war, and take it, benefits you more than anything else.

But what's the point of studying Hitler's rise to power unless it is to learn from that history and apply the lessons? One lesson is to beware of leaders who come to power in troubled times, and then use foreign threats and economic crises to bolster their own power. Unless we can draw out lessons for our own times, history becomes nothing but a series of dry data points with no broader relevance.

Certainly Bush used 9-11 to consolidate his power and the neoconservative intellectuals who surrounded him adopted a deep cynicism concerning the manipulation of public opinion. Their governing style concerned the utility of public myth, which they found essential to wise rule. The main myth they promoted was that Bush was the Christian philosopher-king heading a new crusade against Islamic extremism. The very stupid among us believed it, and this served as a kind of ideological infrastructure of his tenure as president.

Then it collapsed when the economy went south and he was unable to sustain the absurd idea that he was protecting us from anyone. The result was disgrace, and the empowering of the political left and its socialistic ethos.

The talk of Hitler in the White House ended forthwith, as if the analogy extended only when nationalist ideology is ruling the day. What people don't remember is that Hitlerism was about more than just militarism, nationalism, and consolidation of identity politics. It also involved a substantial shift in German domestic politics away from free enterprise, or what remained of it under Weimar, toward collectivist economic planning.

Nazism was not only nationalism run amok. It was also socialism of a particular variety.

Let's turn to The Vampire Economy by Guenter Reimann (1939). He begins the story with the 1933 decree that all property must be subject to the collective will. It began with random audits and massive new bookkeeping regulations:

Manufacturers in Germany were panic-stricken when they heard of the experiences of some industrialists who were more or less expropriated by the State. These industrialists were visited by State auditors who had strict orders to "examine" the balance sheets and all bookkeeping entries of the company (or individual businessman) for the preceding two, three, or more years until some error or false entry was found. The slightest formal mistake was punished with tremendous penalties. A fine of millions of marks was imposed for a single bookkeeping error. Obviously, the examination of the books was simply a pretext for partial expropriation of the private capitalist with a view to complete expropriation and seizure of the desired property later. The owner of the property was helpless, since under fascism there is no longer an independent judiciary that protects the property rights of private citizens against the State. The authoritarian State has made it a principle that private property is no longer sacred.

The rules begin to change slowly so that enterprise could no longer make decisions in the interest of profitability. The banks were nationalized. The heads of major companies were changed. Hiring and firing became heavily politicized. The courts ruled not on justice but on political priorities. It was no longer enough merely to obey the laws. The national will must trump economic concerns:

The capitalist under fascism has to be not merely a law-abiding citizen, he must be servile to the representatives of the State. He must not insist on "rights" and must not behave as if his private property rights were still sacred. He should be grateful to the Fuehrer that he still has private property. This state of affairs must lead to the final collapse of business morale, and sound the death knell of the self-respect and self-reliance which marked the independent businessman under liberal capitalism.

Price controls were next, enforced intermittently and with them grew up a large gray economy, with businesspeople spending more time getting around the rules than producing wealth.

To increase his prices a dealer must have a special permit from the Price Commissar. A request for a price increase must first be certified to by the group leader; it must be accompanied by a detailed statement of necessity and other pertinent data, such as production and distribution costs.

State production mandates were next. Goods were to be produced according to political goals.

Backed by the General Staff of the army, Nazi bureaucrats have been able to embark upon schemes which compel the most powerful leaders of business and finance to undertake projects which they consider both risky and unprofitable.

Bankers were required to act as state actors.

Under fascism, big bankers, formerly independent — except, of course, 'non-Aryans' — have become State officials in everything but name. They are often in high and influential positions, but they are all members of the compact, centralized State machine. Their independence, their individual initiative, their free competitive position, all the principles for which they once fought fervently, are gone.

If you think that the parallels stopped after Bush left power, consider this passage from Reimann:

The totalitarian State reverses the former relationship between the State and the banks. Previously, their political influence increased when the State needed financial help. Now the opposite holds true. The more urgent the financial demands of the State become, the stricter measures are taken by the State in order to compel these institutions to invest their funds as the State may wish.

Once the banks were forced wholly under the control of the government, they became the means by which all property became subject to the state:

The totalitarian State will not have an empty treasury so long as private companies or individuals still have ample cash or liquid assets. For the State has the power to solve its financial difficulties at their expense. The private banks themselves, the financial institutions which previously dictated the terms on which they were willing to lend money, have built up the system of siphoning off liquid funds. This financial system is now utilized by the totalitarian State for its own purposes.

So it was for the stock market, which was regarded as a national asset. Speculation was forbidden. Public companies were entirely subject to bureaucratic rule. Order replaced the old spontaneity, while speculation of the old sort became an entirely underground activity. The largest companies didn't entirely mind the course of events.

The disappearance of small corporations gives rise to a tendency among small investors not to risk their capital in new competitive enterprises. The larger the big corporations grow and the closer they become connected with the State bureaucracy, the fewer chances there are for the rise of new competitors.

So too for insurance companies, which were compelled to buy government paper.

The tendency toward ever more economic regulation resulted not in socialism as such but fascist planning.

The fascist State does not merely grant the private entrepreneur the right to produce for the market, but insists on production as a duty which must be fulfilled even though there be no profit. The businessman cannot close down his factory or shop because he finds it unprofitable. To do this requires a special permit issued by the authorities.

The national demand for "stimulus" replaced private decision making entirely, as businessmen were required to produce and avoid any economic downturns that might embarrass the state.

The Nazi government has expressly threatened the private entrepreneur with increased State coercion and reduction of personal rights and liberties unless he fulfills adequately the 'duty to produce' according to the State's demands.

But stimulus could not and would not work, no matter how hard the party officials tried, because the very institutions of private property and competition and all market forces had been overwritten.

The totalitarian regime has annihilated the most important conservative force of capitalism, the belief that private property ought to be a sacred right of every citizen and that the private property of every citizen ought to be protected. Respect for private property has penetrated the spirit of the people in all capitalist countries. It is the strongest bulwark of capitalism. Fascism has succeeded in destroying this conservative force … People still have to work for money and have to live on money incomes. Possession of capital still provides income. But this income is largely at the mercy of State bureaucrats and Party officials.

In Nazi Germany there is no field of business activity in which the State does not interfere. In more or less detailed form it prescribes how the businessman may use capital which is still presumably his private property. And because of this, the German businessman has become a fatalist; he does not believe that the new rules will work out well, yet he knows that he cannot alter the course of events. He has been made the tool of a gigantic machine which he cannot direct.

The regime also dramatically increased social and medical legislation, providing lifetime pensions to friends and conscripting doctors in the service of its dietary and medical goals.

Now, if any of this sounds familiar, it is because the principles of intervention are universal.

The Nazi regime represented not a unique evil in history but rather a now-conventional combination of two dangerous ideological trends: nationalism and socialism.

We know both all too well.