To Oppose Free Trade Is To Embrace Violence 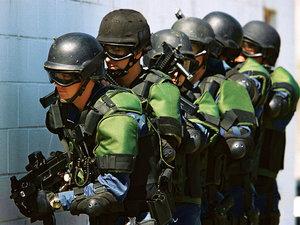 To oppose free trade, on the other hand, is to engage in the imposition of fines, prison terms, and other sanctions on people for engaging in non-violent exchange.

That latter part is usually ignored by average people who support restrictions on free trade for whatever reason. They frame their opposition to trade as if it were a mere academic question, and as if the reality of restricting free trade were simply a matter of saying “don’t do that” and then everyone will agree to stop doing it.

Shall fines be $1,000 or $100,000? Shall perpetrators serve 90 days in jail or 5 years in prison? These are the questions that any opponent of free trade must answer. And if the answer is “yes” to any of these questions, let’s then outline which taxpayer-funded government agencies shall be in charge of hunting down the lawbreakers, prosecuting them, and jailing or fining them. The (presumably well-paid and well-pensioned) government agents won’t work for free. What spy apparatus shall be employed to keep an eye on all the potential violators?

And, of course, ignorance of the law will be no excuse, so everyone who wishes to import a trinket or widget from a foreign country will need to know all the laws, regulations, and sanctions that come with such a business venture. To not know this all could mean one’s life will be ruined by federal prosecutors.

For example, if you don’t know the details of the US law known as the Lacey Act, you could be serving harsh prison sentences for violating foreign laws, or for importing fish peacefully acquired, or for engaging in a seemingly endless list of activities that any normal person’s common sense would suggest are peaceful and legal.

Similarly, when Gibson Guitar Corporation was raided by a SWAT team for running afoul of some arcane law about the importation of wood, that was just the natural outcome to be expected from restricting free trade. Those laws were in place to protect domestic lumber industries from imports. But hey, the law’s just there to protect American, workers, right? So, apparently, it’s fine if those Gibson guitar people have their livelihoods and families ruined by legal fees, fines, and jail sentences.

Opponents of free trade, like supporters of the anti-Cuban embargo, for example, like to talk a good game about supporting freedom and liberty, but when all is said and done, their policies amount to nothing more than the sordid jailing and prosecution of non-violent merchants and consumers.

The anti-trade crowd likes to tell themselves that these laws only punish cigar-chomping villains in skyscrapers, but that’s not how laws work. Since laws aren’t written to apply to specific companies, they punish certain behaviors instead. Such laws may indeed restrict big, evil corporations, but they also end up applying to small entrepreneurs and small business owners, most of whom lack an army of attorneys, and usually end up in a far worse position than any big company might. Like the owners of the Gibson Guitar Corporation, many small- and medium-sized business owners simply seek out the lowest-cost goods so they can offer goods to their customers at a lower price. Those goods are often located in foreign countries. But, without an immense legal team, most ordinary people will be caught up in the net of trade restrictions.

So far, this all ignores the economic arguments against restricting free trade. Those of us not engaged in the direct importation of goods will also suffer when goods are restricted. Trade restrictions on pharmaceuticals, auto parts, food, and whatever else only makes those goods more expensive. And not all those goods are consumption goods, of course. Entrepreneurs use those goods to create new goods and then must charge higher prices to his customers also. A janitor who must pay higher prices for a truck or a shop vac due to trade restrictions must pass on a portion of that cost to the customer. And, with higher prices, the janitors will have fewer customers and fewer profits. Shopkeepers in turn must then have dirtier shops because they can afford fewer janitorial services.

Yes, a tiny portion of the population that’s engaged in the domestic manufacture of shop vacs and trucks will benefit. But, it’s the janitors and their customers (the hair salon and sandwich-shop owners) who are paying the price of subsidizing the factory workers.

These issues aren’t part of an intellectual exercise. The downside of restricted trade is very real for real people.

But, we don’t need me to explain the economic problem with restricting trade. Adam Smith, Ludwig von Mises, and the entire line of liberal, laissez faire economists agree on this point.

The nationalist program of using protectionism to shield American workers from competition is based on the idea that trade with outsiders hurts the local economy. But many who accept this idea in the international sphere then promptly forget the idea when applied domestically.

Murray Rothbard mocked this mindset in the context of immigration when he wondered why it’s not a problem when someone moves from Massachusetts to take a job in Michigan. In that case, the response is never to complain about how people from Massachusetts are stealing the jobs of people in Michigan. No, the argument is only applied if someone crosses an international boundary to do the same.

As with trade, then, it’s bizarre to argue that goods imported from Virginia to California are perfectly tolerable — and even beneficial — while imports from neighboring Tijuana are somehow damaging.

Rothbard noted the idea becomes more absurd the more local you get. The proposed economic justification for “Buy American” is no different from the demand to “Buy North Dakotan” or “Buy 55th Street.” While there certainly are groups that promote only buying goods from one’s home states (i.e., the “ABC — Always Buy Colorado” campaign), such efforts rarely rise above being a marketing gimmick and virtually no one supports trade restrictions between states.

Thus, by their actions, the demonstrated preference of Americans is to take advantage of the benefits of buying and using goods made thousands of miles away by people they’ll never meet. That is, they clearly accept the benefits of trade with a far-away economy (as is the case of trade between San Francisco and St. Louis), but they then turn around and reject the same reality when dealing with international trade.

At the heart of this mindset is pure mysticism, of course, since it requires one to believe that a person in Brownsville, Texas, has the same economic interests as a person in Portland, Maine, but entirely different interests from a person in nearby Monterrey, Mexico. It requires a belief in some sort of metaphysical or perhaps physically objective difference between humans in Monterrey and humans in Portland.

Even the most basic powers of observation should disabuse one of such a strange notion, and yet, American discussions of trade accept the idea as a given.

Left to their own peaceful trade, of course, such ideas would evaporate quickly as people pursued mutually beneficial economic relationships across borders and barriers of every kind.

Today however, we must continue to deal with people who accept an anti-trade ideology that prefers violence to peace, and coercion to freedom. Unfortunately, governments are perfectly happy to oblige them.