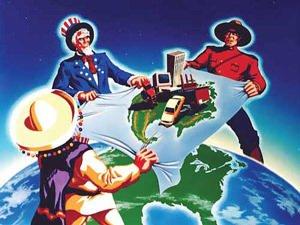 Editor’s Note: The North American Free Trade Agreement (NAFTA) was approved by Congress 20 years ago this month. Rothbard’s essay on NAFTA, reprinted below, is available in the collection Making Economic Sense.

For some people, it seems, all you have to do to convince them of the free enterprise nature of something is to label it “market,” and so we have the spawning of such grotesque creatures as “market socialists” or “market liberals.” The word “freedom,” of course, is also a grabber, and so another way to gain adherents in an age that exalts rhetoric over substance is simply to call yourself or your proposal “free market” or “free trade.” Labels are often enough to nab the suckers.

And so, among champions of free trade, the label “North American Free Trade Agreement” (Nafta) is supposed to command unquestioning assent. “But how can you be against free trade?” It’s very easy. The folks who have brought us Nafta and presume to call it “free trade” are the same people who call government spending “investment,” taxes “contributions,” and raising taxes “deficit reduction.” Let us not forget that the Communists, too, used to call their system “freedom.”

In the first place, genuine free trade doesn’t require a treaty (or its deformed cousin, a “trade agreement”; Nafta is called a trade agreement so it can avoid the constitutional requirement of approval by two-thirds of the Senate). If the establishment truly wants free trade, all it has to do is to repeal our numerous tariffs, import quotas, anti-“dumping” laws, and other American-imposed restrictions on trade. No foreign policy or foreign maneuvering is needed.

If authentic free trade ever looms on the policy horizon, there’ll be one sure way to tell. The government/media/big-business complex will oppose it tooth and nail. We’ll see a string of op-eds “warning" about the imminent return of the 19th century. Media pundits and academics will raise all the old canards against the free market, that it’s exploitative and anarchic without government “coordination.” The establishment would react to instituting true free trade about as enthusiastically as it would to repealing the income tax.

In truth, the bipartisan establishment’s trumpeting of “free trade” since World War II fosters the opposite of genuine freedom of exchange. The establishment’s goals and tactics have been consistently those of free trade’s traditional enemy, “mercantilism” — the system imposed by the nation-states of 16th to 18th century Europe. President Bush’s infamous trip to Japan was only one instance: trade policy as a continuing system of maneuverings to try to force other countries to purchase more American exports.

Whereas genuine free traders look at free markets and trade, domestic or international, from the point of view of the consumer (that is, all of us), the mercantilist, of the 16th century or today, looks at trade from the point of view of the power elite, big business in league with the government. Genuine free traders consider exports a means of paying for imports, in the same way that goods in general are produced in order to be sold to consumers. But the mercantilists want to privilege the government-business elite at the expense of all consumers, be they domestic or foreign.

In negotiations with Japan, for example, be they conducted by Reagan or Bush or Clinton, the point is to force Japan to buy more American products, for which the American government will graciously if reluctantly permit the Japanese to sell their products to American consumers. Imports are the price government pays to get other nations to accept our exports.

Another crucial feature of post-World War II establishment trade policy in the name of “free trade” is to push heavy subsidies of exports. A favorite method of subsidy has been the much beloved system of foreign aid, which, under the cover of “reconstructing Europe,” “stopping Communism,” or “spreading democracy,” is a racket by which the American taxpayers are forced to subsidize American export firms and industries as well as foreign governments who go along with this system. Nafta represents a continuation of this system by enlisting the U.S. government and American taxpayers in this cause.

Yet Nafta is more than just a big business trade deal. It is part of a very long campaign to integrate and cartelize government in order to entrench the interventionist mixed economy. In Europe, the campaign culminated in the Maastricht Treaty, the attempt to impose a single currency and central bank on Europe and force its relatively free economies to rachet up their regulatory and welfare states.

In the United States, this has taken the form of transferring legislative and judicial authority away from the states and localities to the executive branch of the federal government. Nafta negotiations have pushed the envelope by centralizing government power continent-wide, thus further diminishing the ability of taxpayers to hinder the actions of their rulers.

Thus the siren-song of Nafta is the same seductive tune by which the socialistic Eurocrats have tried to get Europeans to surrender to the super-statism of the European Community: wouldn’t it be wonderful to have North America be one vast and mighty “free trade unit” like Europe? The reality is very different: socialistic intervention and planning by a super-national Nafta Commission or Brussels bureaucrats accountable to no one.

And just as Brussels has forced low-tax European countries to raise their taxes to the Euro-average or to expand their welfare state in the name of “fairness,” a “level playing field,” and “upward harmonization,” so too Nafta Commissions are to be empowered to “upwardly harmonize,” to ride roughshod over labor and other laws of American state governments.

President Clinton’s trade representative Mickey Kantor has crowed that, under Nafta, “no country in the agreement can lower its environmental standards ever.” Under Nafta, we will not be able to roll back or repeal the environmental and labor provisions of the welfare state because the treaty will have locked us in — forever.

In the present world, as a rule of thumb, it is best to oppose all treaties, absent the great Bricker Amendment to the Constitution, which could have passed Congress in the 1950s but was shot down by the Eisenhower administration. Unfortunately, under the Constitution, every treaty is considered “the supreme law of the land,” and the Bricker Amendment would have prevented any treaty from overriding any preexisting Constitutional rights. But if we must be wary of any treaty, we must be particularly hostile to a treaty that builds supranational structures, as does Nafta.

The worst aspects of Nafta are the Clintonian side agreements, which have converted an unfortunate Bush treaty into a horror of international statism. We have the side agreements to thank for the supranational Commissions and their coming “upward harmonization.” The side agreements also push the foreign aid aspect of the establishment’s “free trade” hoax. They provide for the U.S. to pour an estimated $20 billion into Mexico for an “environmental cleanup” along the U.S.-Mexican border. In addition, the United States has informally agreed to pour billions into Mexican government coffers through the World Bank when and if Nafta is signed.

As with any policy that benefits the government and its connected interests, the establishment has gone all out in its propaganda efforts on behalf of Nafta. Its allied intellectuals have even formed networks to champion the cause of government centralization. Even if Nafta were a worthy treaty, this outpouring of effort by the government and its friends would raise suspicions.

The public is rightly suspicious that this effort is related to the vast amount of money that the Mexican government and its allied special interests are spending on lobbying for Nafta. That money is, so to speak, the down payment on the $20 billion that the Mexicans hope to mulct from the American taxpayers once Nafta passes.

Nafta advocates say we must sacrifice to “save” Mexican President Carlos Salinas and his allegedly wonderful “free-market” policies. But surely Americans are justly tired of making eternal “sacrifices,” of cutting their own throats, on behalf of cloudy foreign objectives which never seem to benefit them. If Nafta dies, Salinas and his party may fall. But what that means is that Mexico’s vicious one-party rule by the PRI (Institutional Revolutionary Party) may at last come to an end after many corrupt decades. What’s wrong with that? Why should such a fate cause our champions of “global democracy” to tremble?

We should look at the supposed nobility of Carlos Salinas in the same way we look at the other ersatz heroes served up to us by the establishment. How many Americans know, for example, that under Annex 602.3 of the Nafta treaty, the “free-market” Salinas government “reserves to itself” all exploration and use, all investment and provision, all refining and processing, all trade, transportation and distribution, of oil and natural gas? All private investment in and operation of oil and gas in Mexico, in other words, is to be prohibited. This is the government Americans have to sacrifice to preserve?

Most English and German conservatives are fully aware of the dangers of the Brussels-Maastricht Eurocracy. They understand that when the people and institutions whose existence is devoted to promoting statism suddenly come out for freedom, something is amiss. American conservatives and free-marketers should also be aware of the equivalent dangers of Nafta.