The Myth of the Great Railroad Meetup 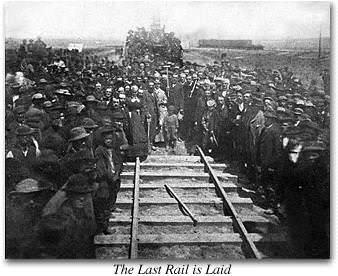 On a recent ski vacation in Utah, my daughter and I took a breather from the slopes one day to do some exploring. We decided to take our excursion to a place in American history, Promontory Summit, Utah.

Promontory is not a place you just happen to run across. Located northwest of Salt Lake City and north of the Great Salt Lake, Promontory is literally in no-man's-land of the western plains. This isolated spot on the map is the place where the railroads of the Central Pacific and the Union Pacific met completing the transcontinental rail line.

What was to be a walk through American history trivia for my daughter and me, turned out to be an economic lesson in the absurdity of government subsidies.

After perusing the railroad artifacts inside the Promontory museum and taking the obligatory picture of the spot on the rail line where the Golden Spike was driven, we set out approximately three or four miles east to a spot where our self-guided walking tour would start. The Big Fill Trail allows you to walk along a mile and a half of railroad grade that was created by both the Central Pacific moving east from Sacramento and the Union Pacific moving west from Omaha.

It has been well noted in history that these two railroads were given land grants, low interest-rate loans, and direct subsidies by the federal government. The subsidies were graduated according to the difficulty of the terrain being traversed with $16,000 paid for construction over an easy grade and up to $48,000 for grades in the mountains. Additionally, changes to the Pacific Railroad Act allowed payment of subsidies for grading which could extend as far as 300 miles ahead of the tracks being laid.

At the second stop on the trail, the perverseness caused by the subsidies was in full view. At that moment we were standing on the grade built by the Central Pacific and there less than fifty yards below was the grade built by the Union Pacific. The grades did not meet but ran parallel to each other and had continued that way for 250 miles — almost a year's work. It was also noted in the guidebook that the work camps for the two groups were literally separated by a hillside.

It was now apparent to my daughter, laughing out loud, that these two railroads had no intention of meeting. The purpose of grading and laying tracks was not to meet the demand for transcontinental passenger service, but simply to collect, risk-free of any market forces, the federal subsidies. Any doubt about this conclusion would be quickly erased up ahead at the tour stop overlooking Spring Creek Ravine.

The Central Pacific constructed a "big fill" of earth to span their portion of the ravine so track could be laid safely upon the ground. Below the "big fill" the Union Pacific spared neither time nor safety by constructing a rickety-wooden trestle across the gulch. The trestle, which was 85 feet high and 400 feet long, was so flimsily built that one reporter suggested, "It will shake the nerves of the stoutest hearts of railroad travelers when they see what a few feet of round timbers and seven-inch spikes are expected to uphold — a train in motion."

Of course the trestle was not meant to uphold a passenger train; it was built to transfer the money from Washington to the coffers of the Union Pacific Railroad. It also became clear that the treacherous route taken by the Central Pacific blasting through the Sierra Nevada Mountains was more of a matter of financial begging than passenger convenience.

Eventually the powers in Washington DC realized what was taking place and ordered the two railroads to link up at Promontory Summit which was ceremoniously achieved on May 10, 1869. What happened next is almost totally absent from our history texts. Because of the poor manner in which the rail lines were laid, work began almost immediately to reconstruct the entire project. Three years after the celebrated meeting at Promontory Summit the Union Pacific Railroad was bankrupt.

Here we are 138 years later with many people still believing in the economic virtues of subsidies from farm programs to energy development. It makes me smile to know that there is at least now one fifteen-year-old girl, with the image of parallel grades in her mind, who sees the fallacy of it all.