The Myth of the Cell-Phone Addiction 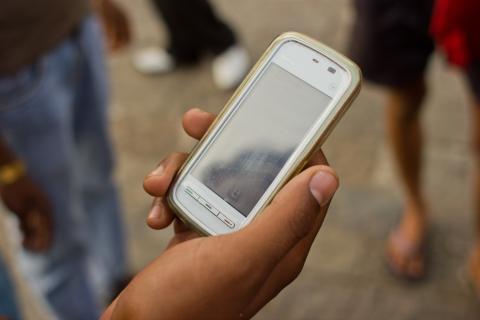 Pundits and bloggers are addicted to decrying the supposed cell-phone addiction of Americans. ( 1, 2, 3, 4, 5, 6, 7, 8, 9, 10, and 11 ). Calls for government to do something about it can’t be far behind, especially considering the other claims that cell phones give us tumors, gut our memories, and jackhammer our brains. There are even reports of second-hand damage from others’ cell phone use.

These articles go beyond merely claiming that cell phones are annoying—and truly people could learn some manners here, as in many other aspects of life. As regards this supposed “addiction”—this is a word attached to any habitual behaviors of others we do not like.

What’s interesting here are those who offer something like a Marxian-style critique of cell-phone use. We are alienated from society, we are told, and obviously tormented by loneliness, and thereby seek solidarity and community. But rather than seek out genuine connection to others, we reach for technology, the very thing that alienated us to begin with. We grow ever more dependent on our gizmos but they ultimately disappoint because they only cause addiction to machines and thereby increase alienation.

Also, we the oppressed long for empowerment and the ego-boost generated by the sense of importance granted by the idea of receiving and sending cell-phone calls. We can’t stop using our cell-phones and yet they only further entangle us in an artificial world of machines created via the money matrix.

Oh just look at the cell-phone people everywhere! Surely this is the final stage of capitalism in which we ignore our brothers and sisters walking next to us but instead talk through electronic means to some distant party, and talk about what? About nothing: “It’s, like, so cool to be on the phone!”

You can make this sort of critique up about anything, pepper the essay with references to Freud, Marx, Nietzsche, Kierkegaard, and, to stay in good with conservatives, the insufferable T.S. Eliot, finish it off with a hymn to primitivism—even a wish to return to the Garden of Eden without the taint of technological sin—and you have a winning piece of commentary.

There is plenty wrong with this genre of criticism, as Tibor Machan points out (he found someone who regretted the invention of the mirror!). But let us address the cell phone in particular, because many people seem to have bought into the idea that it represents some sort of grave danger to the culture and an ominous sign of something or other.

Of course property owners are free to ban them or not. Burger King wouldn't, but a 5-star restaurant probably would. Whatever is profitable. Private property solves whatever "problems" arise but these are not any different from other problems of what dress, speech, and behavior is right for the time and place. Certainly there is no reason to ban cell phones on flights, as the FCC is considering; leave it up to enterprise itself to decide.

The critics, however, are not satisfied. They say cell phone addiction is a broader concern. To be sure, it's easy to defend the cell phone on grounds of its emergency services. With cell phones, people have never felt more safe and secure when driving or being out and about in potentially dangerous places. The critics will concede that. What drives them nuts is casual use, the whole middle-class casual culture of the cell phone, which seems to them wholly disgusting.

And yet it is the casual use of technology that makes its emergency use ever more economically viable. It is the demand for gab that has driven up the number of providers, driven down the prices, and made amazing technologies available to all, which then provides the spill-over benefit of making the emergency use of the same affordable and ubiquitous. A market of emergency-only cell service would not have become the mass phenom that it is today.

The appearance of addiction reflectsa change in the use of public space made possibly by a new technology that was born into the marketplace only in 1994. Ten years ago, talking on the phone was a behavior that was tied to place, namely the home or the work station. Or there was the now-anachronistic phone booth.

In retrospect, it is obvious that a vast amount of productivity was being wasted by the requirement that we be strapped to a chair, or a room in our homes, or in a glass booth, in order to keep up with work duties, friends, and family.

Suddenly and almost like magic that changed. The cell phone made it possible to speak to anyone anywhere from any place. Think of it: what a dramatic transformation. For the first time in the history of everything, anyone can have direct personal contact with anyone anytime.

No more hiding out in the home, wiling away the hours with friends, or office, which used to be all about the phone but which is now all about email and instant messaging. Professional and personal uses of phone calls can take place anywhere. We can bluetooth our way through all informal life settings and get the most out of every minute.

Not only that: it seems obvious in retrospect that audio communications are an individual and not a community affair. When the telephone first came along, you had to walk to the post office or town market to use it. What a pain. Then there were lines shared by several homes. How tedious! Then there was one phone per household—owned and maintained by the government. Please!

The ability to completely privatize audible communication had been possessed by the private sector since at least 1947, but the government hogged too much of the radio spectrum to make it possible. It wasn’t until 1994 when the government deigned to provide private enterprise what it needed to create a revolution in communication.

For this reason it is useful to think of the cell phone as a freedom technology along the lines of the world wide web. It was developed by the private sector for the private sector. Both represent institutional revolts against the state’s presumption to own and control the “command posts” of society. Cells and the web are the mode and means of liberation that the state will forever resent.

But back to the supposed addiction we all have. We are only making the best use of our time. What better time to talk on the phone than when other tasks are prohibited to us? You can turn driving into a multitasked operation. Same with walking to and from places. So too with shopping at the mall. These are the very times to pull out the cell phone, not as an addiction but as a means of making the most productive use of a period of time. It is a simple matter of economizing, that is, directing resources toward their highest valued use.

But because our eyes see something new, something we haven’t been socialized to expect, and because the market is expanding and democratizing so rapidly, it creates the illusion of something having gone oddly wrong. Instead of seeking to understand it, the temptation is to reach into pop culture’s bag of ideological bromides and decry it as some sort of pathology.

The oddity of public phone use first dawned on the academic class several years ago when they would walk through campus and see throngs of students yammering away on the phone. Cell-phone addiction! Can these kids unplug themselves even for a minute to enjoy the scenery or talk to real people? Why should they be so very interested in their pathetic little materialist existence even after all the assigned readings from Veblen, Marx, and Derrida?

In any of these cases, a phone call is not possible or desirable. But traveling from one spot to another? Shopping? Driving? It’s just the time to call, even if only to leave a message.

Now, you might respond that these kids are not actually saying anything useful. They are engaged in conversational junk, punctuated by grunts of nothing. Well, productivity is a subjective concept. Meeting social obligations, making another person feel connected, letting someone know you care—these are all productive activities as understood by the individual speaking. Who are we to say what constitutes valuable or valueless conversations?

The pundit class has a penchant for judging the culture of freedom harshly. If ten years ago, these same critics had walked up and down the block peering into people’s windows, they might have spied people on the phone in every home. They might have decried this as a phone addiction but nobody would have taken them seriously. In fact, the response would have been readily at hand: mind your own business, bud, and get a life.

Actually that’s not a bad response to most everything that comes out of the carping class of intellectuals who try to make us feel guilty and oppressed for using products that improve our lot in life. Modern technology has us all talking to each other again. That can’t be a bad thing.